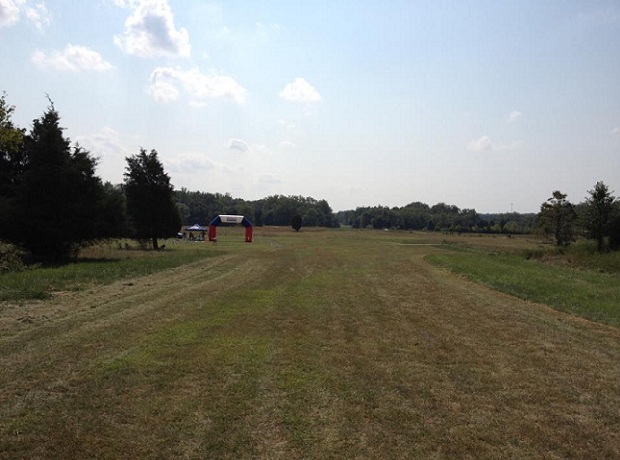 It's a hearty welcome once again to all competitors, coaches, parents, other relative and friends, the numerous volunteer helpers, along with the usual long time supporters of high school cross country to the 20th Annual Glory Days Grill Invitational at Bull Run Regional Park on Saturday, October 13.

Meet management looks forward, as usual, to another fine day of competitive racing, with approximately 2,500 runners representing 67 different schools from around the area who will compete in one of the nine races to be contested on Bull Run's 5,000 meter (3.1 miles) course.

There have been a few different times in the past two decades when the course has had to be altered a bit due to weather and landscaping changes, but the course this year should be virtually the same as it has been for the past couple of years, as meet originator Mike Dobson continues to maintain the course as one of the most spectator friendly venues in the area.

This invitational meet, held once again on the second Saturday in October, usually serves as a very good barometer for individuals and teams as they prepare for the upcoming championship season beginning later this month, and the meet will once again try to fullfil all the runners and coaches needs; with a variety of races scheduled to accommodate the various skill levels of the participants.

The course will open up for the Glory Days Grill competitors at 9:00 a.m. at which time coaches can pick up their team packets. Final packet pickup is scheduled for 9:30 a.m. which will also coincide with the coaches meeting.
At each level of races, the boys will go first and then be followed by the girls. The first race will be at 10:30 a.m. for the freshman boys and that will be followed by the freshmen girls at 11:10 a.m.
Each school is allowed an unlimited number of entries for the freshmen races as these ninth graders get an important opportunity to race solely against their other first year high school counterparts.
The junior varsity races begin at 11:50 a.m. and greatly benefit the large number of hardworking youngsters wo are very involved in their respective school's distance running programs, and like the freshmen races, are also set up to have an unlimited number of entries for each school.
Due to the large number of J.V. runners on the boys side, there will be two junior varsity races for them, determined by a random draw of the schools involved. The J.V. Division 1 race will be at 11:50 a.m. and the Division 2 junior varsity race will head off at 12:30 p.m. That will then be followed by one large section of the J.V. girls to begin at 1:10 p.m.
The Varsity B boys race will start at 2:00 p.m. and the Varsity B girls will square off at 2:30 p.m. in races that pit many of the top runners from schools with smaller class enrollments against the second tier of the larger enrollment schools entered. The Varsity B races as well as the Seeded Varsity races will be limited to the standard number of entries of seven individuals per school.
Highlighting the day for many will be the Seeded Varsity races with the boys scheduled for 3:00 p.m. and the girls set for a 3:30 p.m. start, as many of the top individuals and teams from the metropolitan area square off against each other.

The team awards ceremony will take place at the pavilion stage area beginning at 4:15 p.m. and promptness by all the award winning teams will greatly aid in a timely exit from the park well before sunset.

Glory Days Grill is now in its fourteenth year of sponsoring the meet and restaurant co-founders Jeff Newman, Bob Garner and Rich Danker are once again greatly pleased to be involved in the myriad of action and cooperation which is necessary to pull off an event like this; and which needs and gets a great number of people to be pro-active in order to guarantee a successful day.
Jeff, Rich, Bob and Gary Cohen, along with the rest of the Glory Days Grill staff, would like to give a big thanks in advance to all of the volunteers involved in concessions, parking, results compilation and all other necessary forms of meet management and would especially like to thank Mike Dobson, Mike Kiernan, Scott Raczko, Matt Gilchrist, Keira Carlstrom, Steve Johnson, Dan Woolley, Joe Belkoski, Gale Faulkner, Mark Stripe, Charlie Lihn and Bob Bilko for all the extra time and help that they donate each and every year.
FURTHER  REMINDERS

We will once again be using the chip timing system. Coaches will need to turn in their team runners' chips promptly upon the conclusion of the meet to the "chip timing return area" which Mr. Kiernan will explain to you at the coaches meeting at 9:30 a.m.
Concessions will be sold throughout the meet behind the press box area and there will also be a tent set up for tee shirt sales near the concession area, along with the increasingly popular Glory Days Grill prize wheel, etc.
With approximately 2,500 runners competing throughout the course of the day, that will mean plenty of vehicles entering and exiting the park. All drivers need to follow the parking signs and especially adhere to the directions for where to park from the parking volunteers.
They have a plan and will be sticking to it. Preventive maintenance to insure nobody is blocked in by someone else and that no motorists are blocking any part of the cross country course.
First call for each race will be twenty minutes before the start of each race. Coaches are asked to greatly encourage their runners to check in at first call. They will then be able to know the location of the starting box assigned to them and have plenty of space to still warm up near the starting area.

Coaches and athletes are also reminded that although the team awards will be at 4:15 at the pavilion stage area, the individual awards for the top fifteen finishers in each race will be given out just beyond the finish line chute area following the end of each race. Always a nice photo opportunity for those award winners at that time.

Please do not impede the progress of any of the runners during the race by being too close to the course's race line and be sure and heed any instructions doled out during the races by the course marshals.
This is important at all times and especially near the finish line area where sometimes spectators invariably display different degrees of perceived overexuberance.

Team and individual results will be posted during the meet at the press box area as soon as we have them. It should be a fairly quick turnaround from the finish of each race to the posting of the results of that race, since we will be using the chip timing system for the fifth year in a row.

Immediately following the conclusion of the meet, results will be sent and then posted very quickly on www.milestat.com  as Brandon Miles once again keeps everyone well informed on the actions and happenings from each week across the state of Virginia and beyond.

Thanks to everyone, in advance, and good luck to all the participants.

On the boys side, Chantilly, led by senior Sean McGorty, is the more than obvious favorite. The Chargers have rolled through all of their intrastate competition thus far this year with team victories at the Monroe Parker Invite, the Oatlands Invitational and the Octoberfest Invitational at Great Meadow.
The one race they did not win so far this season might actually have been their best performance of the season when they finished a solid fourth at the Great American meet in Cary, NC a couple of weeks ago; with the three teams finishing ahead of them all ranked among the top ten in the country.
McGorty has been nothing short of scintillating this season. Sean started his season with a 25 second victory at the Monroe Parker meet with an excellent time of 14:50 on the 2.98 Burke Lake course and also had a 25 second margin of victory at Oatlands and a whopping 50 second victory last week at Octoberfest.
His closest race though, was probably his most impressive race of the season when he set the 5k course record of 14:43.6 two weeks ago at Great American in eking by Jacob Thomson of Holy Cross in Kentucky (14:43.8), who was ranked as the number three high school boys runner in the nation at that time.
The Chantilly squad as a whole cannot be overlooked as they have had the ability to win a couple of invites this season even if McGorty's number one card is thrown out and they score their #2 through #6 runners instead, led by returning all state senior Logan Miller, along with senior Faris Sakallah and junior Peter Malander.
It will not exactly be a walk in the Bull Run Regional Park for McGorty since Thomas Madden of Skyline is also entered. Madden is the defending Virginia  AA state champ and a fellow Foot Locker finalist like McGorty. Madden faced McGorty at Oatlands and finished 38 seconds behind in third place overall but has since closed the gap to sixteen seconds after finishing fourth at Great American in a fine time of 14:59 and looks to be getting ready to peak at the right time.
Other top individuals to watch include Patrick Joseph of Loudoun County, who finished third at the AA state meet last year and junior Nathaniel Hall of Atlee, who finished just ahead of Joseph at the Maymont Invite in Richmond two weeks ago.
Other potential medalists include J.J. Lapointe of Bishop O'Connell, seniors Bradley Heuer of Herndon, Dillon Creswell from Patriot, Ashkan Mohammadi for South Lakes, Ryan Hart of Yorktown, Sam Dodge from St. Albans and John Amann along with William Rabil from West Springfield and juniors Ryan Hughes of Briar Woods, G.C.Marshall's Mackenzie Haight, Griffin Colaizzi from Georgetown Day, Madison's Matt Calem, Tai Dinger of St. Albans and Haileye Demsie from Washington-Lee,

Top teams looking to try and close the gap on Chantilly include Robinson and West Springfield with Georgetown Day and Jefferson capable of a top five team finish as well.

On the girls side, junior Caroline Alcorta of West Springfield is coming off of an individual victory at the Hagain Stone meet in North Carolina from last weekend in also leading her team to the team title and the Spartans also have senior Maddie Wittich running well in the number two slot.

Also in the team mix is Tuscarora, which finished ahead of  Chantilly by ten points at Oatlands and had just a 34 second spread among their top five runners along with West Potomac, which has Kate Genuario as their top runner and Madison, with sophomore Amanda Swaak as their number one.
Some of the other top individuals to follow include juniors Macey Schweikert and Ruth Briggs along with sophomore Lauren Berman of Robinson; Chloe Bavin of Atlee; seniors Devin Nihill of O'Connell and Jackie Deffer from Briar Woods; junior Bailey Kolonich of R.E. Lee; sophomores Emily Kaplan of Georgetown Visitation, Candace Jones from Patriot and Lucy Srour of Winston Churchill and freshman Sarah Freix from Westfield.
Tweets by milestatdotcom