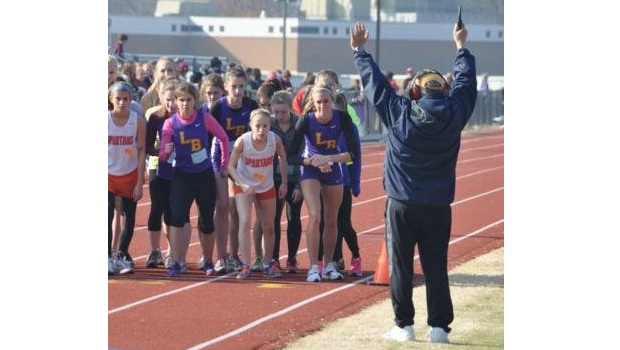 All photos by Steven Pham 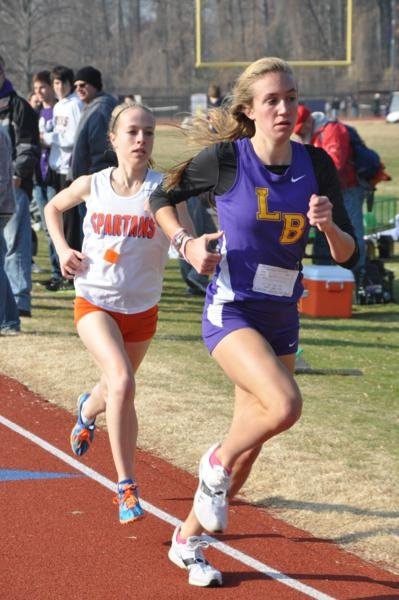 Why run indoors when you can still roll outdoors? Especially when the weather is warm enough to bear it. That is what several Patriot District schools did on Saturday at Lake Braddock High School to attempt to get district, regional, and state qualifiers. The Northern Region collectively as a whole for many years was against holding polar bear meets and only utlized Episcopal School and the Thomas Jefferson Community Center (both in Alexandria) for their smaller district regular season indoor meets. Possibly seeing other parts of the state take advantage of "polar bear" meet opportunities to qualify athletes, which are meets held during the indoor season that are held outdoors but count as part of the indoor season and can count as qualifiers for the indoor championships, motivated a segment of the Northern Region to host several polar bear meets themselves in recent years.

For many distance runners coming off long cross country seasons with races as recent as last weekend in North Carolina for either the Nike Cross Southeast Regional or Foot Locker South Regional, they simply trained through another week to see if they can pop a qualifier early and then be able to shut it down with a little break before gearing up the training load again for the track season. For two special and talented young ladies, the start of their track season overlapped with a cross country season yet to be completed as both Lake Braddock senior Sophie Chase and West Springfield junior Caroline Alcorta have a date next Saturday with the remaining top 40 best individual cross country girls at the Foot Locker Nationals. However, there they both were on Saturday at Lake Braddock competing in a small polar bear meet against one another with arguably the biggest races of their high school career to date only 7 days away.

Note: All times reported from sources are unofficial until results received, but the reports that we have received on some of the performances from a distance heavy meet on Saturday at Lake Braddock High School in Burke, Virginia were quite impressive if hold up when verified officially.

2012 Foot Locker finalists Sophie Chase of Lake Braddock and Caroline Alcorta of West Springfield planned out a duel and time trial with each other at 1600 meters to sharpen up for their big national race with Chase taking it out to push for a potential sub 5 minute tune-up before their trip this upcoming week to San Diego. They ended up just missing sub 5 minute times with Chase winning in 5:01 and Alcorta trailing just in right behind her at 5:02, but not bad wheels and speed showcased by either while still training and preparing to race at the 5K distance. The Lake Braddock senior Chase is hoping to improve upon her 11th place All-American finish and break well inside the top 10 after winning the South Regional in Charlotte last Saturday, while first-time Foot Locker Nationals qualifier and a junior Alcorta will try to be as competitive as possible and finish among the top half of the 40 runner field to be assembled at Balboa Park in San Diego. 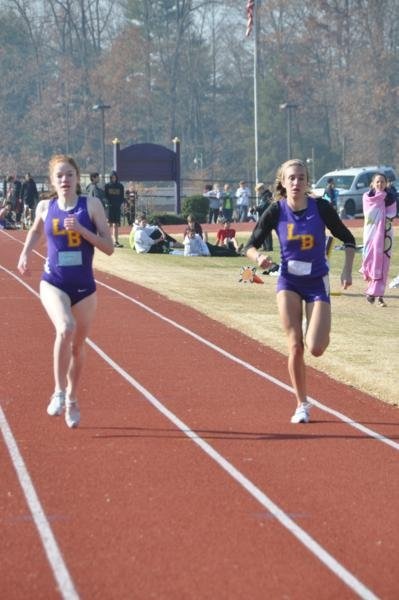 Chase then later doubled back to get her second state qualifier of the day out of the way with teammate Katie Roche in the 1000 meter run as both runners were able to dip under the 3 minute mark as they crossed the line almost simultaneously together. Roche has been on a tear all cross country season as Lake Braddock's #3 runner. She earned her first All-State honor in cross country with sixth place finish in the Group AAA state race and nearly qualified individually for the Nike Cross Nationals with a 5K personal best run of 17:49 last weekend down in Cary, North Carolina for the NXN Southeast Regional. Teammate Hannah Christen would have joined both Chase and Roche likely in today's races on their home track but she was on the other side of the country in Portland, Oregon racing at the Nike Cross Nationals, where she placed 63rd in her debut appearance.

The way things are shaping up for this indoor season, the Lake Braddock girls might be in the driver seat for the AAA state team title if they can keep their big three distance stars healthy and racing well in Chase, Christen, and Roche. Their 4x800 meter relay, which won the outdoor state title last spring will be hard pressed to beat. Chase and Christen are expected to be two of the top contenders in both the 1600 and 3200 and should pick up double digit points in both races. Meanwhile, Roche's sub 3 minute 1000 early might shift her away from her previous indoor specialty of the 500 meter dash and make the 1000 meter run her primary race for the state meet. After winning the Group AAA state cross country title, Lake Braddock girls are certainly capable of accomplishing the triple crown in winning state team titles in all three seasons (cross country, indoor track, and outdoor track) in one academic year. This track season marks the return of their former head track coach Bob Digby, who has come out of retirement after sitting out several years from coaching. 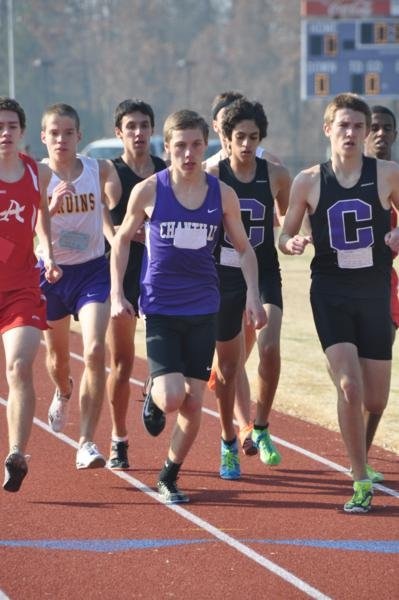 If the at-large snub by the NXN selection committee was not enough to motivate them, the remaining three members of the Chantilly boys not racing individually at either Nike Cross Nationals in Logan Miller or Foot Locker Nationals in Sean McGorty stepped on the track to see how fast they could roll around the track with 8 laps coming off their gut-wrenching but awe-inspiring team performance last weekend at NXN Southeast Regional when they missed the auto nationals team qualifier by a sixth runner tiebreaker despite not racing #1 runner Sean McGorty nor more than five runners on the line with normal varsity runner Peter Malander out with injury. Faris Sakallah led the Chantilly Chargers in winning the 3200 meter race at the Lake Braddock polar bear meet with a personal best and state auto time of 9:30, while Lake Braddock sophomore Alex Corbett also achieved the auto standard in second place at 9:38. Also running 3200 meter personal bests for Chantilly as another testament of the team well coached and trained to have been peaked to perform at this time of the year were Adam Huff in third place at 9:41 and Ryan McGorty in fourth place at 9:43.

McGorty and Miller are given as faster than the younger McGorty, so that gives Chantilly already five runners at 9:43 or faster for 3200, while the recovering Malander has a best of 9:52. The Blacksburg boys were one of the best teams to have come through the state of Virginia and showed with a 10th place finish at NXN. Meanwhile, the Chantilly boys beat them decisively in their first two head to head encounters and then tied them in points without their All-American front runner Sean McGorty. Where would they have placed at Nike Cross Nationals? Hmmmm.

Also note that at another Northern Region quad meet, but held indoors at Episcopal School's 200 meter track on Saturday...Two of the Concorde District's best in James Robinson junior Macey Schweikert and Oakton sophomore Allie Klimkiewicz had an early indoor season 1600 duel themselves like Chase and Alcorta with Schweikert winning in a time around 5 minutes flat, while Klimkiewicz was reportedly timed at 5:06. Klimkiewicz will be joining Chase and Alcorta later this week out in San Diego for the Foot Locker Nationals after finishing 9th at the South Regional in Charlotte.