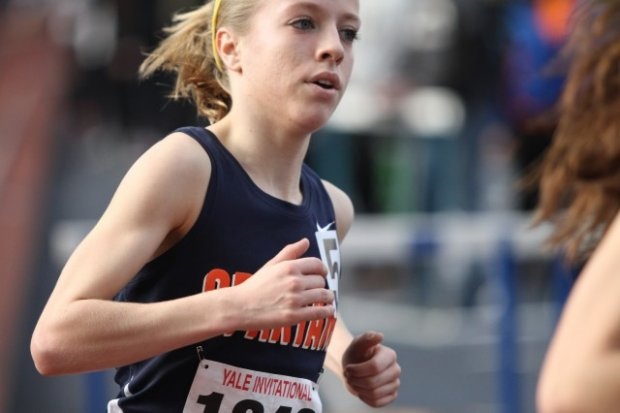 West Springfield junior Caroline Alcorta finished second in a competitive 3000 meter run at the Yale Track Classic in Connecticut this past weekend which featured some of the elite high school distance runners in the Northeast. Alcorta's time of 9:52.37 converts to 10:35.91 for 3200 meters, which would rank her 13th fastest all-time indoors in Virginia high school history in the projection. Alcorta also ran on the West Springfield girls' distance medley relay as the 1600 meter anchor leg. Her 4:58.3 final leg split helped the West Springfield girls place fourth in the field with a time of 12:10.54, which also ranks highly on the Virginia high school all-time list and current US #5. Maddie Wittich opened with a 3:48.8 split on the 1200 meter leg, Reagan Bustamante did her part with a 61 second split for the 400 meter leg, while Katie Kennedy posted an 800 meter split of 2:21.8 prior to handing the baton off to Alcorta.

West Springfield boys 4x800 meter relay also ran very well up in New Haven, Connecticut this past weekend with a runner-up finish and a state auto qualifying time of 8:08.62. Their 4x400 meter relay squad were also runners-up at Yale with a season best time of 3:30.86. Relay leg on both the 4x800 and 4x400, William Rabil also broke 4:30 in the mile over the weekend with a fifth place run of 4:29.25.