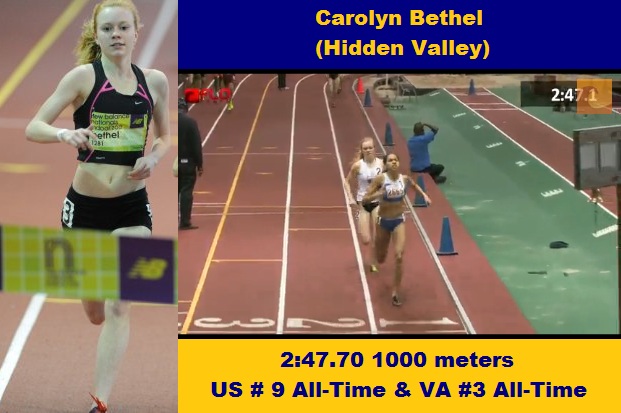 On Friday evening in the junior women's 1000 meter race comprising some of the nation's fastest at the distance so far this indoor season, Hidden Valley senior Carolyn Bethel toed the line with two other Virginians in juniors Katie Roche of Lake Braddock and Ellison Grove of Battlefield. Shooting out the lead from the start to set a torrid pace with a 30 second first lap (200 meters) was US leader Sabrina Southerland of Benjamin Cardozo in New York City. A sub 2:10 half miler, Southerland had the leading time in the nation prior to the meet with a season best of 2:52.11. Bethel was just behind Southerland on the national leaderboard with her personal best of 2:52.46 from a mid-December meet at Liberty University as she was coming right off a strong end to her cross cross country at the Nike Cross Nationals with a top 30 finish. In the race itself, the nation's fastest two coming into this weekend at 1000 meters stayed the top two, but with much improved and faster times. Bethel got out strong in second place behind Southerland with a 31 second first lap and the field spread quickly for a short 5 lap race from the brisk start as Bethel settled in for 34-35 second laps for her three laps keeping Southerland with a second or so ahead of her. In the final lap and in particular in coming off the final turn, Bethel closed fast to nearly surprise Southerland (2:47.44 winner) at the end with a 31 second last 400 meters to finish as race runner-up with a five second PR and the #9 fastest time in US high school indoor history at 2:47.70. In state history, only Sarah Bowman of Fauquier at 2:43.40 and Katie Doswell of St. Catherine's at 2:47.21 (both from 2005) have ran faster than the recent Northern Arizona University verbally committed Bethel.

Finishing sixth in the same and loaded race as Bethel and breaking her teammate Sophie Chase's school record (2:55.96) in the 1000 meter run was Lake Braddock's Katie Roche with a time of 2:55.86. Chase may have joined Roche up in New York to try and hold her off for her record, but she was competing in the Northern Region swimming championships this past weekend. Roche's effort at the Armory puts her just outside of the VA top 25 all-time indoor list in the event, which currently stands at 2:55.80. The Lake Braddock girls are in great position for a state team title in Group AAA this indoor season with their 4x800 meter relay as one of the nation's fastest and Sophie Chase as well as teammate Hannah Christen to be two of the top seeds in both the 1600 and 3200 meter races. Roche has become the fastest in the 1000 meters in Group AAA and a state title contender in her own right as an individual.

On Saturday, the Forest Park boys were looking to make history of their own and further establish themselves as one of the fastest 4x200 meter relays that the state of Virginia has ever seen. After running under 1:30 more than once this season in the event, the sprint crew from Prince William County finally got an opportunity to see how fast their speed could carry them on a banked 200 meter track, which is always condusive to even faster performances compared to flat indoor tracks. In an invite only 4x200 meter relay race with some of the fastest relays in the Northeast, the Forest Park boys represented the state well as they flew to a new US leading time of 1:28.25 and moved themselves all the way up to #3 all-time in Virginia high school behind only two great back-to-back Deep Creek relays in 2002 (1:27.09) and 2003 (1:28.05). After last year being robbed at the state indoor meet with a phantom disqualification when officials mistakenly picked the wrong school involved with a contact and fall, the Forest Park boys have brought back their entire relay back for 2013 led by a state champion in Mustaqeem Williams on a mission to prove themselves as not only the state's best and nation's best for this year, but maybe the state's best ever. Williams has two teammates on the relay in Joshua Washington and Ricky Morgan who have posted times this season which appear to be All-State caliber themselves individually in the sprints.  The next return trip for this group to the New York Armory would be for the New Balance Indoor Nationals which is over a month away and plenty of time for them to chip away from their time on Saturday.