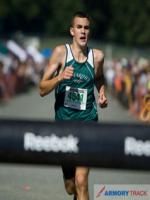 NB Nationals: Forbes, Chariho and Hillhouse collect titles
The New Balance Indoor National Championships start Friday morning at the Armory in New York.  MileSplit New England will follow the accomplishments of all the athletes from the region and post updat...

NBIN Boys 4xMile Wrap-up - An Island State Shocker...
All morning, the buzz at the Armory around the boys 4 x mile was focused on two powerhouse programs that have dominated distance running in recent years. It was a two-horse race, the chatter went, an...