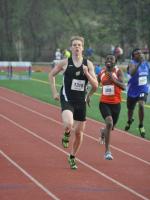 Regional Championships Results & Coverage...
We are deep into championship season with regional week, which means the sport&#39;s rules will be enforced more closely than during the regular season. Coaches are reminded to go over wit...

VA @ Penn (Saturday): Westfield boys (7:41) fall just s...
The Westfield boys nearly pulled it off and almost became repeat Championships of America winners in the 4x800 meter relay. After running a 7:47 qualifying time for Saturday&#39;s fin...
If track events were scored like an XC meet......
While generating XC team projection rankings for this fall based on 1600 and 3200 meter times of their returning runners, we decided to go further and have some fun generationg similar XC meet ...
Leslie Sherman Invitational Summary...
The Leslie Sherman Memorial Invitational was held on Thursday at West Springfield before many athletes in the Northern Region are off on their spring break vacations.   Mount Vernon&#39;s Mic...