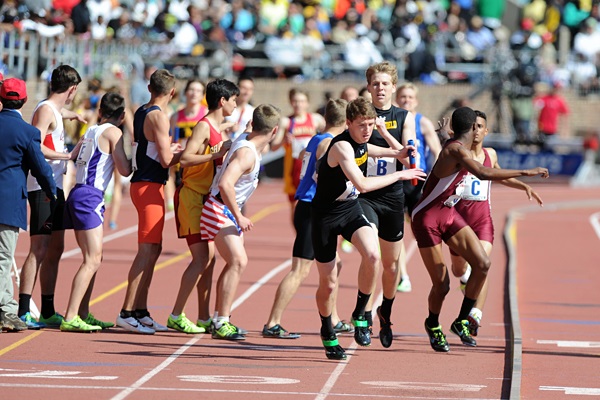 The Westfield boys nearly pulled it off and almost became repeat Championships of America winners in the 4x800 meter relay. After running a 7:47 qualifying time for Saturday's finals in front of the biggest crowds of the weekend at the Penn Relays. The foursome of Max Chambers, Jeff Edmondson, Troy Sevachko, and Nathan Kiley for Westfield came to race in a title defense attempt and battled it out in a classic duel with New Jersey's Pleasantville High School. 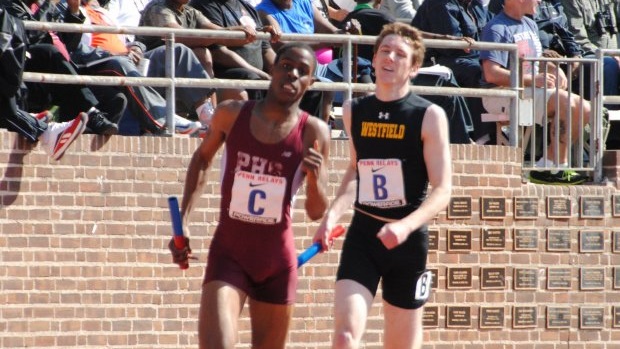 Chambers put Westfield out in the lead with a 1:53 split, but Pleasantville rallied back with an incredible 1:49 split from their second leg Isaac Clark. Westfield had a four second gain on the third leg as Kiley and Pleasantville's Jacob Clark received the baton virtually at the same time. 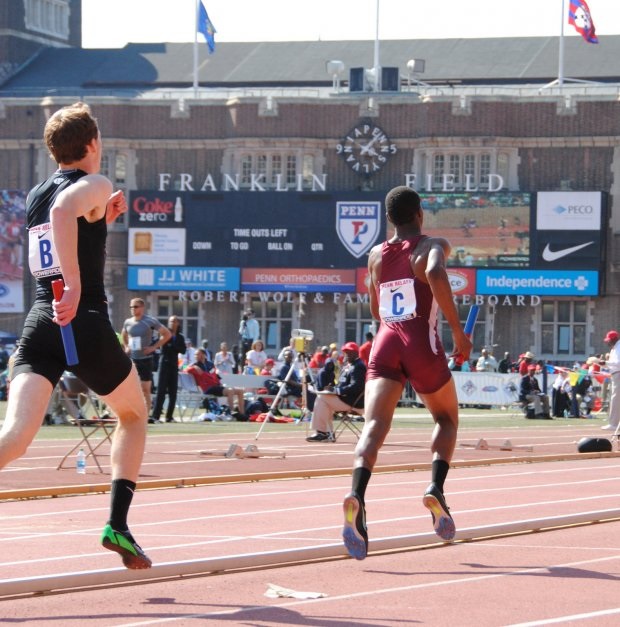 Clark matched his brother Isaac to run Pleasantville's second sub 1:50 leg in the race on anchor to pull away from the indoor national 800 champ Kiley coming off the final turn, who still ran a sensational leg and split of 1:50.90. Pleasantville won with a US leading time of 7:40.71, while Westfield's final time of 7:41.84 for runner-up honors at Penn Relays now ranks them US #3 in the 4x800 meter relay. The Westfield boys last year had an opportunity to break the Group AAA state meet record of 7:42 set by Midlothian in 2003, but didn't and will see if they can break the record again in the final year of the Group AAA State Championships before the VHSL breaks up the current system for a 6 class system next year.

Jamaica has too much speed. The Forest Park boys ran the second fastest time ever in state history and nearly became only the second school in Virginia to ever break 41 seconds in the 4x100, yet their US #6 clocking of 41 seconds flat only placed them 7th in the Championships of America finals. Only current US #5 relay Junipero Serra of California (6th, 46.95) finished ahead of them among the US squads, while the top 5 finishing relays were all from the Caribbean nation of Jamaica. The quartet included Ricky Morgan, Mustaqeem Williams, Joshua Washington, and Elijah Newson. Newson is a new addition to this sprint crew, which during indoors was one of the nation's best in the 4x200 at a 1:28 season best and state champions in the relay event.

Byron Robinson started off the day for the state of Virginia in the high school events on Saturday at the Penn Relays by competing in the 400 meter hurdles. The Western Branch senior Robinson came into this weekend as the US leader in the event after a 53.45 performance at the Atlantic Coast "Spring Break" Invitational in early April. Robinson, who spend a lot of time in the state of Pennsylvania for the next four years when he arrives at Penn State University next fall, ended up running just a little off from his early season performance in the 400 meter hurdles to finish 6th overall with a 53.84 clocking and fourth fastest among the Americans.

Robinson later raced in the prelims of the Western Branch 4x400 meter relay squad, which was able to best Bayside's 3:18.74 state leading performance at the MileStat.com Elite Track Classic the day before on Friday night in Richmond. With two sub 50 second legs from Corey Jones (49.8) and Tyson Robinson (49.5), Byron Robinson was able close strong for his team with a 47.7 split as the Bruins finished 4th in one of the toughest and fastest heats of the qualifying round with an overall time of 3:18.15 to become the new state leaders, but the time was not fast enough for the always extremely competitive cut-off for the Championships of America finals in the 4x400. The Western Branch boys did have two other relays racing in finals on Saturday with their 4x100 meter relay placing 7th in the large school finals and their 4x800 finishing 12th in the CoA finals.

There were no Penn Relays champions from Virginia in the boys' field events contested on the final day as Group AAA indoor state triple jump champion Aaron Worrell of Woodside was the top finisher from Virginia among the four field events held in the high jump, pole vault, long jump, and triple jump. The UVA recruit Worrell leaped for a season best mark which puts him just outside of the US top 10 in the triple jump with a third place leap of 48'8.75". Future Wahoo teammate with Worrell, Christian Rogers of Manchester, placed fifth in the triple jump at 47'5". Tallwood High School had Virginia's top performer in both the high jump with the Steven Dunbar (7th, 6'6.75" and in the long jump with Rafael Moore (6th, 23'0.75").