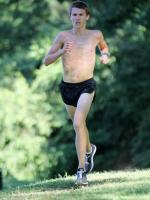 Interview: Ryan McGorty On Being The Middle McGorty Bro...
Ryan McGorty explains what it was like to be the middle brother between two fast and famous brothers....

Chantilly Goes VA #10 All-Time 7:51, B. McGorty Splits ...
While the rest of the state was focused on the first weekend of regional championships, Chantilly was busy putting together a historic performance in the boys 4x800....

Blazing Times At The Right Time; 3rd Battle Recap...
If this meet is known for one thing it would be fast times. This meet flat out produced some of the most impressive times of the season and also showed us a lot of the talent our state has going into ...

McGorty & Swaak start out as best XC harriers in NOVA...
Chantilly&#39;s Ryan McGorty, one of the top cross country returners from the state of Virginia, won the historic Monroe Parker Invitational to become the third in his family to win at Burke Lake Park...

Five Boys Sub 15:00? Special Preview: Top 5 Returners...
Virtual meets are a perfect source for predicting outcomes but they are not the best to do so before the XC season begins. MileStat outlines here the top five returning athletes from last year giving ...