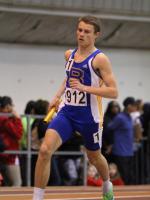 2015 Group 3A Outdoor Season Predictions...
It is truly never too early to begin to examine rankings. MileStat took that addage to heart and is previewing what we found is the likely outcome for next year's Outdoor season. Previewed here is bot...

Insider Recap: VA Top Performances of The Week!...
Miss any action this weekend? Here are the top performances from the weekend. We will be adding them throughout Sunday and Monday....

Willcutts Wins, Angermeier Signs, Blacksburg Beats Ever...
The winds of southwest Virginia settled down in the afternoon yesterday to welcome 12 teams and 30 individual qualifiers to the 3A West Regional Championship meet. Spectators and athletes who’ve e...

VHSL Group 3A/4A State Outdoor T&F Championships Previe...
With only hours left until the state meet championships begin it is time to look at two of the most closely contested state meets to be held this weekend. Headling these meets will be Zajac, Davidson,...

MileStat Makes One Last Stop On The Road To The Penn Re...
With only days, no hours, separating us from the 2014 Penn Relays Carnival it was time to see how the Blacksburg Bruins were preparing themselves for this prestigious meet. Both the boys and girls 4x8...

Penn Relays Accepted VA Relays Released!...
The office of the Penn Relays released and posted the accepted entries in the 4x800&#39;s and Distance Medley Relays this evening. These include some of the fastest teams and individuals in the state ...