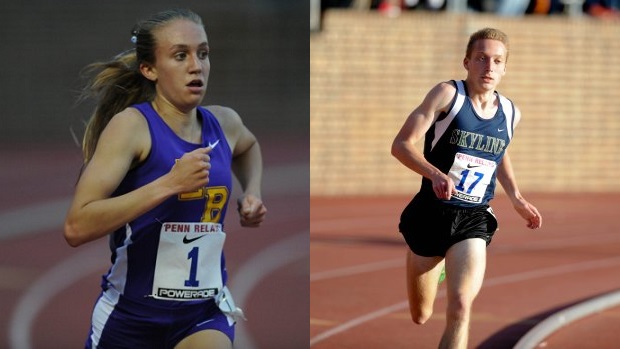 The return or comeback of several top distance runners seems to be the prevailing theme for the high school races at this weekend's Colonial Relays in Williamsburg which includes both Penn Relays 3K champions from a year ago in Lake Braddock's Sophie Chase and Skyline's Thomas Madden. 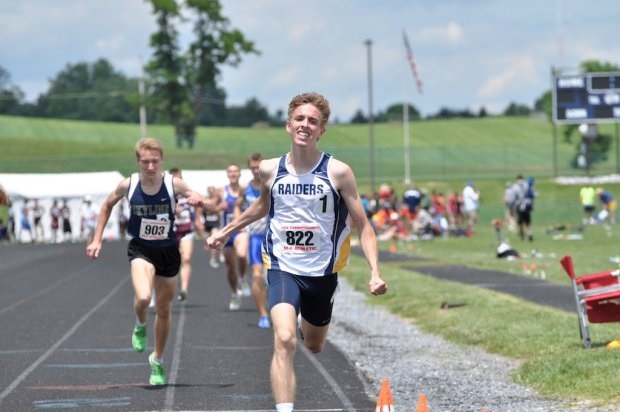 In the high school boys' mile race on Friday, returning Group AA 1600/800 meter state champion Patrick Joseph makes his 2013 track season debut (Loudoun County does not have indoor track) in a race against a familiar rival in Skyline senior Thomas Madden as well as another sub 4:20 miler in Cavender Salvatori from Wilmington Friends School in Delaware. Despite not having an indoor track season of races, Joseph was not hibernating over the winter and not training. He will look to continue the momentum from the end of his cross country season when he won the Region II cross country title over Madden, finished as a state runner-up in the Group AA state cross country race at Great Meadows, and just missed a Foot Locker Nationals berth with a 12th place and 15:12 5K PR race down in Charlotte at Foot Locker South. Last spring, the Virginia Tech recruit Joseph clocked a 4:14 mile and also ran a time of 1:54 in the open 800.

Madden is not making his season debut (won the Brian Watkins I-95 Invite 3200 two weeks ago in 9:39), but he is certainly still on the comeback trail as he looks to regain his strength, fitness and confidence since discovering at the end of the cross country season that low glucose levels was affecting his racing performances. Madden will certainly be able to gauge where he is at on his road to return to top form of last spring when he won the Penn Relays 3K and ran a sub 9 minute two mile by racing against Joseph in the mile on Friday and then coming back on Saturday to face off against Group AAA 3200 indoor state champion Louis Colson of Thomas Edison in the high school 3K race. Madden ran 8:25 last spring at the Penn Relays for 3000 meters, but a sub 8:40 performance would likely be a satisfactory time for him at this point in working his way back into shape. 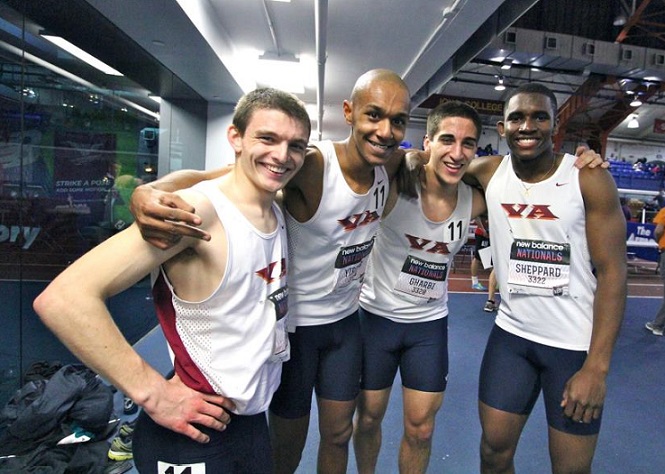 The Thomas Edison junior Colson pulled off one of the biggest upsets from this past indoor season when outkicking and defeating Chantilly's Sean McGorty for the Group AAA indoor state 3200 title with a 9:06 PR. Based off recent race performances, Colson would figure to be the slight favorite for this weekend despite having the slower PR's than Madden. The Colonial Relays will be the first meet of the outdoor season for Colson, who also expects to be featured on the same day as well on the Thomas Edison 4x800 meter relay, which earned All-American honors indoors with a 7:47.02 third place finish at the New Balance Nationals last month. 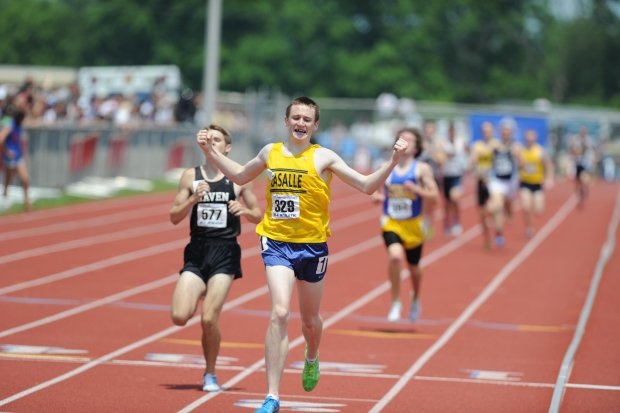 Edison should find itself in a tough race with LaSalle College from Pennsylvania with their seed time of 7:48, which is based off the 7:48.36 performance from them at the New York Armory in early February at the New Balance Collegiate Invitational. LaSalle College has three runners who ran between.4:20-4:26 for 1600 meters this past winter for great depth and likely no weak links on their 4x800, while Tom Coyle is their fastest as he ran an impressive 800 meter time of 1:51 at the end of last outdoor season following a 4:11 1600 meter victory at the Pennsylvania State Outdoor Championships. A race between Coyle and Colson would be exciting on anchor, but Colson might need help from his teammates to give him a slight lead advantage into the final exchange with Coyle's superior mid-distance credentials over the two miler Colson.

Many teams are racing at Colonial Relays or finding meets with the 3K, mile, DMR, 4x800, and 400 hurdles in the early portion of the outdoor season to run fast enough to qualify to be accepted for the Penn Relays in late April. The Colonial Relays is blessed to have last year's Penn Relays 3K champions for both the boys in Madden and the girls in Lake Braddock senior Sophie Chase. Similar to Madden, Sophie Chase is on the comeback trail as well. Saturday's 3000 meter race at Zable Stadium in Williamsburg will be the Stanford bound Chase's first race back since having to scratch out of the second day of the Group AAA State Indoor Championships with an unexpected and unknown last-second injury. Chase has been able to resume training after discovering the injury to be a sacroiliac joint problem and rehabbing to correct the problem. 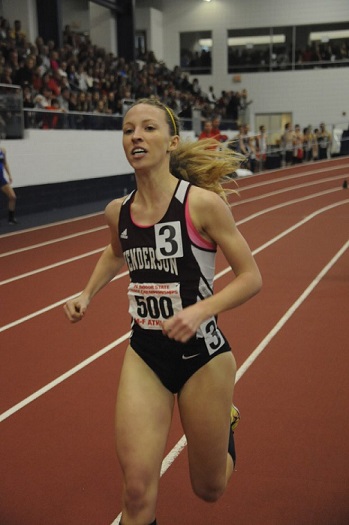 Last spring, Chase won the Penn Relays 3K at Franklin Field with a performance of 9:37 and ranks as one of the fastest ever in state history in that event as well as the two mile with her 10:19 best at the New Balance Outdoor Nationals last spring. She is the top seed for Saturday's race by 13 seconds over West Chester Henderson (PA) senior Stephanie Aldrich. Aldrich was the Pennsylvania state runner-up in the mile indoors with a 5:02 PR and has broken 5 minutes for the 1600 and 18 minutes for 5K to make her a solid early test and new competition for the two-time Foot Locker All-American Chase. 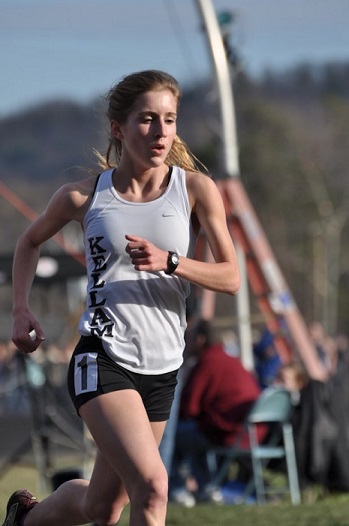 Another West Chester Henderson girls' distance runner is one of the top entrants in Friday's high school mile race in Natalie Deacon. The race figures to be a race for first between two in Deacon and Kellam senior Abby Motley. Motley use to be known early on in her high school career as the kid half-sister of former Kellam and Virginia Tech great in Natalie Sherbak, who state titles in high school and qualified to compete in several NCAA nationals as well in college. Motley is no longer the kid sister anymore as she enters her final season of high school track. An All-State finisher indoors in the 1600, Motley opened her season two weeks ago at the Knights Track Classic in winning the 3200 meter run at Cave Spring High School in a 11:10 PR. Before she graduates, Motley would like to break the 5 minute barrier in the 1600 (5:04) and 11 minute barrier in the 3200. She should get good competition from Deacon on Friday to push for a good early season time as Deacon makes the evolution up in distance as she has primarily been a mid-distance runner so far as she ran under 3 minutes in the 1000 indoors and was the Pennsylvania state runner-up at 800 meters with a great time indoors of 2:13. 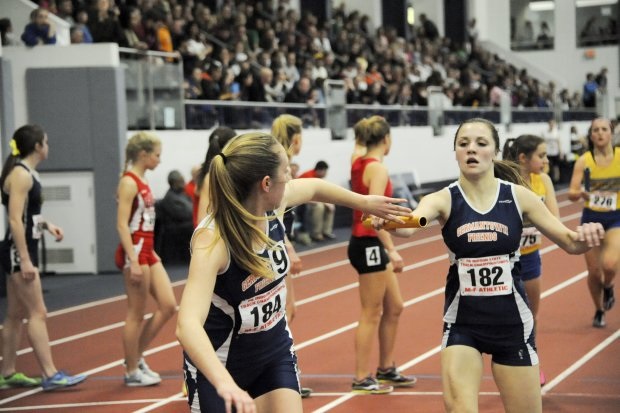 The 4x800 and DMR races for girls look to be a Pennyslvania showdown between West Chester Henderson (featuring Deacon and Aldrich) and Germantown Friends. The Germantown Friends girls were All-Americans indoors in the 4xmile at the New Balance Nationals with a fifth place time of 20:57. Their top runner is Eliza Luken-Day, who has track bests of 5:05 in the mile and 10:47 in the two mile.