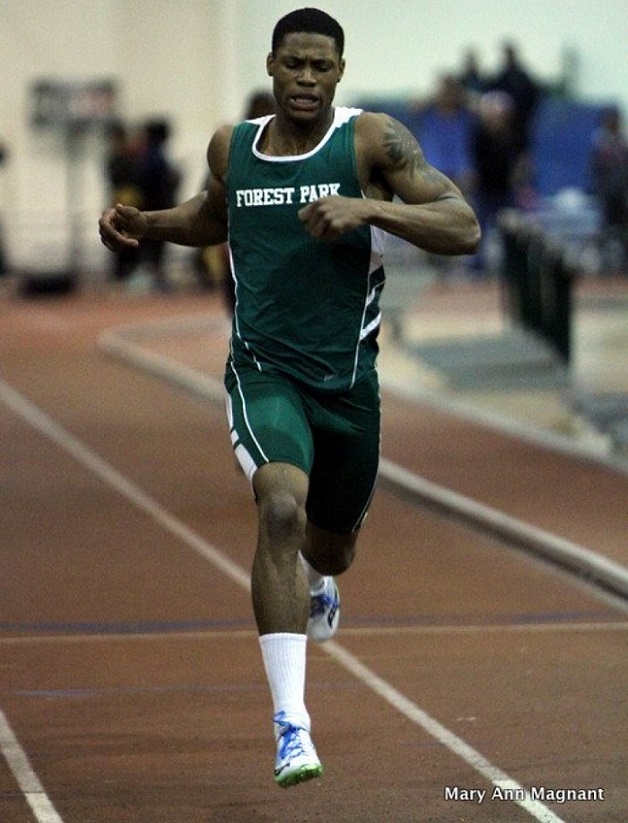 With a national leading 55 and wins in the 300, long jump, and triple jump Mustaqeen Williams was the star of this first ever 6A Region Championship. On the girls side of the results it was a exposition on domination by the Bruins of Western Branch. The Bruins won the girls team race by an impressive 49 points while resting many of their top runners for next week's state meet. Leading the Bruins was Funlayo Oluwole and Milan Parks who each won their field event and placed high in the 55 hurdles. Parks finished third in that event after running a US #3 7.99 in the prelims.

To being day two of the regional championships were the field events including boys high jump, girls shot put, and both long jumps. One of the most anticipated field events of the meet was the boys high jump between Tallwood's Steven Dunbar, the national leader at 7-01, and Grant Holloway of Grassfield who has jumped 6-10. Both of these athletes entered the competition after six feet but the bar never got above 6-10. Dunbar failed to make 6-4 and opened up the competition by his early departure. Taking advantage of this was Bradley Jones of Oscar Smith and Holloway. Both had jumps that barely failed 6-8 but since Holloway made the height on his second attempt, he held the tie-breaker over Jones and that eventually led to his victory. Jones' third jump at 6-8 was by far his best techinical and heighth of any of his prior jumps and if the bar had been at 6-10 or 6-11 he would have likely cleared it.

In the girls shot put it was Sabrina Johnson of Stafford High School posting an impressive 38-02 on her final attempt to come away with the title. Johnson will be facing some of the best competition in the entire state next week and will be looking to improve on her season's best and get close to the 40 foot barrier.

Both long jump competitions lived up to their billings as well, especially in respect to team scoring importance. In the girls long jump it was Western Branch's Milan Parks jump a 17-10.5 mark on her second and last attempt in the competition. A similar storyline happened in the boys long jump when Mustaqeem Williams jumped 23-10 on his third and final attempt to win the competition over perhaps the best underclassman in the entire nation, Grant Holloway.

In the relay races on day two were some of the best and exciting events to be run. On the girls side it was Western Branch holding off impressive Oscar Smith and Grassfield squads to win in 1:44.55. In a region storied in great sprinters, it was only fitting to end this new regional meet like many have in the past with a down-to-the-finish 4x400. Winning this race in an impressive VA #2 4:01.49 was Bethel beating out Tallwood and an all freshman Western Branch team that ran 4:02.82.

On the boys side of the relays was the much anticipated 4x200 with Forest Park, Tallwood, Grassfield, and Western Branch. Though Forest Park had arguably the fastest guy in the entire nation, who split roughly a 21.2, they or anyone else did not have enough to keep up with the "A" lineup from Western Branch. The Bruins won this race in 1:30.27. Grassfield with Holloway was second and Forest Park was third with Mustaqeem Williams running the third leg and moving his team up from last to third. In the 4x400 it was Bayside stealing the show from Western Branch to win the race in 3:26.87 to post a VA #6.

Providing some of the best races and times on the day were the winners of the shorter races and sprints, 55, 55H,300, and 500. One of the first of these races on the girls side was the 55 meter final where Yaa Agyepong-Wiafe of Forest Park sprinted her way to a 7.19 and 6A Regional Title. This race was preceeded by the Western Branch hurdle final that ended with the Bruins scoring 33 points! This race as mentioned earlier was won by Oluwole ahead of multiple teammates in the two heat final. Breaking through and winning the 300 and her first event of the meet was Destiny Ward of Oscar Smith who placed second in two other events (long jump and 4x200) behind Western Branch girls. Ward won the race in a time of 39.82. The 500 was won by Jewel Christian of Woodbridge in 1:16.46 and was followed closely by her teammate Farrah Suber. Christian came into the meet ranked second in the state behind national leader Ellison Grove of Battlefield who she will face next week in the state meet.

On the boys side of the short races it was a story of Mustaqeem Williams proving a strong point that he was still the guy to beat in the state when it comes to sprint races. Williams won the 55 in a national leading time of 6.26 and 300 in 34.35. Williams was followed in the 55 by Vincent Lowe of Grassfield who is the US #3 in the event and by his teammate Ricky Morgan in the 300 (34.45). The 55 hurdles was all Grassfield's Grant Holloway's to win or lose and he won it with ease and flawless form. Holloway entered the meet as the national leader in the event and cruised to a 7.35 finals time to win the event. In the 500 it was Ricky Morgan of Forest Park to show how good of a runner he is, even if his teammate is the fastest guy in the state, when he won the event in 1:04.96 which is a VA #4 and moves him into the position of being the likely favorite to take the state crown.

In the lap races on the guys side were some very close and strategic races that not only had important points at stake but also the automatic qualification for next week's state meet. The shortest of these races was the 1000 that was won by Darrick Thornhill of Varina in a VA #7 time of 2:31.47. In the next race of this pack was the 1600 that was taken impressively by James Broom of Grassfield who ran an extremely smart race that had the field chasing him late and finishing in 4:26.34. The 3200 however proved too much for Broom to double in and went to Giavanni Wiley-Miller of Landstown in 9:48.61.

On the girls side of the lap races were the girls of Ocean Lakes and Cosby attempting to score some points for their teams in the team race. Winning the 1000 was Harper Henson of Cosby in 3:06.25 over Madeline King of Ocean Lakes. Both of these teams picked up over ten points in this event to add to their totals. In the 1600 it was Ocean Lakes besting Cosby down the stretch when Nicole Park won in 5:04.92 over Harper Hensen who finished in 5:10.49. In the final individual race of the day Megan Rebholz of Colonial Forge nearly lapped the entire field en route to her 10:57.71 victory. Rebholz's nearest competitor was Park of Ocean Lakes whose attempt at doubling was foiled when she finished in 11:11.09 behind Rebholz.

This meet for all the buildup it had did not disappoint. For anyone there they would tell you it was very excited and impressive how into the races the crowd was. This was most noticeable during the boys 55 and 300 and you could hear a pin drop due to the silence. Many of the same runners and teams will be returning next week when Boo Williams plays host to the first ever VHSL Group 6A State Meet that will no doubt produce some of the fastest times and best performances in the entire nation.