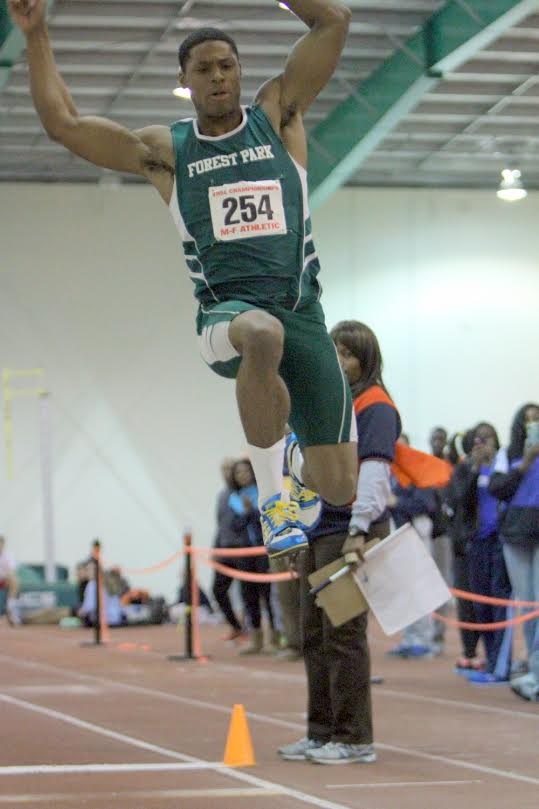 The boy’s high jump was one of the most exciting events contested thus far at Boo Williams as four jumpers were able to clear 6-8.  The competition drew the attention of most in attendance during the morning session as it was evident how much talent was present in the event.  When the bar moved to 6-10, the field was cut in half as only Grant Holloway of Grassfield and Bradley Jones of Oscar Smith were left standing.  Holloway ended up being declared your winner as he accumulated the least number of misses throughout the competition.

A familiar battle was again contested in the girl’s high jump.  Crystal Jones of Colonial Forge and Amiaya Carey of Stafford had faced off twice previously this postseason with Carey taking the win at the Conference 4 and 6A South meets.  While both girls were able to successfully clear 5-6, it was Jones that prevailed this time around as she too won on misses.  Jones had won back to back high jump titles in the outdoor season, but this was her first during the indoor season.

Mustaqeem Williams of Forest Park picked up where he left off yesterday as he won the triple jump with a leap of 47-3.5.  The win gives Williams a sweep of the horizontal jumps at the 6A meet.  It also adds another important 10 points to the Forest Park team total.

Western Branch was another team that benefitted greatly from the triple jump.  Funlayo Oluwole was able to win the girl’s triple jump with a mark of 39-1.  The jump is a new season best for Oluwole by 6.5 inches and ties her for #10 in the United States.  Teammate Milan Parks followed up her win in the long jump yesterday with a second place finish here.  Between the two horizontal jumps, Western Branch has already picked up 36 points.

Thursday Recap: The atmosphere was much more subdued than we are used to at the Boo Williams Sportsplex as action kicked off at the 5A and 6A state championship meets on Thursday.  The new VHSL reorganization gave us an afternoon of small crowds as athletes from both divisions competed in the first two rounds of field events.  Even with the challenges that the new schedule poses, some incredible performances were still posted.

It is hard to surpass the lofty expectations that come with being a national leader in multiple events, but Forest Park senior Mustaqeem Williams did just that this afternoon.  Already the national leader in the long jump coming into the meet, Williams went even further with a jump of 24-9 on his final attempt.  This mark broke the facility record that was held by James Taylor of Nansemond River.  Steven Dunbar also had a big day as he went over a foot and a half further than his previous season best.  His jump of 23-7 bring him up to #11 in the United States.

The long jump was also a very productive event for the Western Branch girls.  Milan Parks took home her first ever individual title as she won the event with a mark of 19-5.75, just an inch behind her season best.  Jewel Smith nabbed second for the Bruins with a jump of 18-5.5.  Oscar Smith freshman Destiny Ward grabbed her first All-State award with her fourth place finish.

The boy’s shot put was one of the more entertaining events of the day as Garrett Weatherbee of Robinson and Reginald Thorne of T.C. Williams traded the lead multiple times.  Thorne came into the third throw of the finals holding the lead at 53-5.5.  Weatherbee, sporting the look of an 80’s basketball player, saved his best for last though as his throw of 54-5.75 took the competition and gave him the first ever 6A shot put title.

There was a lot less drama in the girl’s shot put as Galissia Cause of Battlefield put up a mark of 44-7 to win by over 5 feet.  Cause missed setting an indoor season best by only 2 inches.  The win marked back to back state titles in the shot put for Cause.

Coverage from the VHSL Group 5A State Indoor Championships held February 27th through March 1st at the Boo Williams Sportsplex in Hampton.

The top three teams on the boy’s side in 5A have seen a lot of each other this postseason.  Competition has been fierce thus far between the squads as mere points have separated all three at the Conference 11 and 5A South region meets.

Taking the performance list and scoring it as a meet, MileStat.com can generate a fairly accurate team score projection for the teams slated to compete at the Group 5A State Indoor Championships on Friday and Saturday at the Boo Williams Sportsplex in Hampton.

Want to score the performance list and see what teams are in best position to compete for the state indoor team titles and top 3 finishes at the Group 6A and Group 5A State Indoor Championships? Sean Leyh of MileStat.com has already done that as he tallies up the state meet entries to project the top 10 or 12 teams heading into each state championship meet at Boo Williams this weekend.

When the VHSL announced plans for a new classification system last year, we knew major changes were in store.  Virginia high school athletes will be crisscrossing the state this week as they head to their respective championship meets.  Three different sites will host the finest athletes in the state as they look to write a brand new chapter in the record books.

Performance list for the 2014 VHSL Group 5A State Indoor Championships to be held Thursday thru Saturday, February 27th thru March 1st at the Boo Williams Sportsplex in Hampton, Virginia.