There have been quite a few stories this season and many that have been told a ton of different ways. This series' goal is to tell the stories that haven't been told. The stories that may not have made the front page but are just as important and even more interesting than many others!

It wasn't too long ago that a girl running 18:00 in the state championship was seen as fast and a boy breaking 16 was really fast. Those days are long gone thanks to athletes getting stronger, faster, and better at younger ages.

This year was historically great and the fastest year on the boys' side ever in Virginia. We saw the state record fall as Andrew Hunter dashed to a 14:20 finish at the Third Battle Invitational and saw a record 68 guys break 16:00 this season.

The girls were no slouches either running many girls under 18 and were joined by Weini Kelati going 16:29 to run VA #2 all-time.

Obviously, as athletics and XC adapt to new training techniques, embrace strength training, and as we all set our sights much higher, athletes and times will improve. This has always been the case no matter what sport you are in.

All of that may be true, but there is one thing that XC has no other sport has. This "thing" is really the deciding factor for many performances and really changing the landscape of our sport. This of course is the creation of "super courses" or essentially grass tracks. XC is alone in the ability to change the playing surface.

These courses are created with one thing in mind, speed. They are huge courses built for mega-fields and super fast times. They are spectator friendly and timed perfectly on the calendar and this year seems to have been the tipping point in our sport.

The genesis of this change goes back to the collegiate ranks and becomes the ultimate "chicken or egg" argument. Who knows whether it was the coaches or the meet directors taking the first action but one thing is for certain, colleges have been consistently moving away from difficult courses and going to faster flatter courses.

Just like the NBA or NFL, the higher bodies of sports peculate downstream to others. This is exactly what has been happening to high school races and it is not to say hard courses are gone but that it seems we are entering a new age in our sport. An age of fast courses ruling the landscape.

If you take one look at the rankings you can see right away who the culprits are for this change. On the boys' side 12 meets made up the entire top 60 rankings for Virginia and seven of those meets had 55 of the top 60 individuals. Looking back in 2008 ten different meets made up the top 20, in just that short time fewer and fewer meets are the location of pr's. 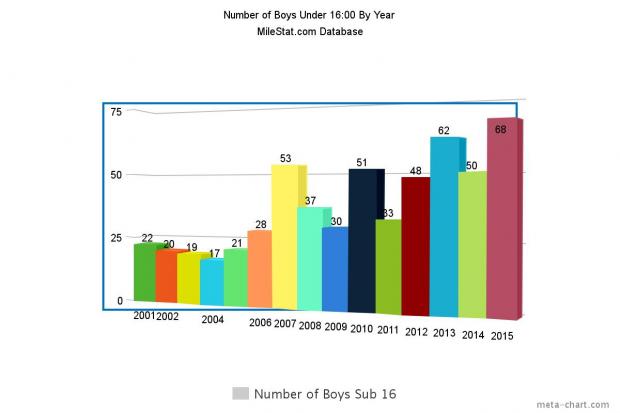 You can see here how this trend is really taking hold. The Third Battle Invitational started in 2010 and the MileStat.com Invitational moved courses in 2015 to the upper course.

Aside from the post-season, the biggest producers of fast times this year were the Third Battle Invitational and MileStat.com XC Invitationals both held the last week of the regular season. Directly following these meets 21 of the top 30 girls' times this season were at just those two meets despite there being over 60 other meets prior to them.

There are even more and more statistics than we can even list showing this systemic change. But let's be clear, this isn't a bad thing. This is a change that is started by meet directors to serve an end of getting more teams to their meets. Meet directors do not direct the the trajectory of our sport but do play into it by what they are willing to do to appease coaches.

This change has led to not only faster times but also bigger meets and better competition which in theory raises the level of the entire state. This has shaped the mindset of many to think broader and further than just the state meet. It has allowed for the growth of some of the best athletes our state has ever seen.

These changes though also begs the question about where the sport is going. Will we see even faster courses? Will the state meet course keep getting faster? When will it stop?

All those questions remain yet to be answered but one thing is for sure. With everything else helping them and now the courses becoming much faster, Virginia is going to keep getting faster in XC.