There have been a ton of great stories all during this historic XC season. This new feature seeks to tell ten stories that haven't been told this season. Check the series out to read all these great stories!

Originally featured 12/10/2015 - Waleed has since moved on to compete for Ole Miss in the collegiate ranks as one of the fastest milers and XC runners in the nation. He most recently finished 20th at NCAA XC Championship. He has also ran a 3:56 Mile.

With all the excitement around Drew Hunter and Weini Kelati and the other Foot Locker National Finalists one great story has somewhat fallen through the cracks. That is the story of Waleed Suliman.

Waleed's story started in the spring of 2014 when he and his family finally were able to move from Amman, Jordan to Richmond, Virginia. They settled in the West End which was is in the Douglas Freeman District.

Check out Dylan Gardner's in depth piece on Waleed's story and journey here!

That trip was roughly 9,600 kilometers. To put that in perspective, if you really wanted to watch all of Virginia's runners compete this weekend in San Diego it would be a 8,500K kilometer round trip!

When he arrived here he knew little to no english but knew he wanted to run. He quickly joined the team and then his story took off.

He started his running career overseas running around 21 minutes for 5K only a year later things were a lot different.

In the fall of 2014 he started his running career in Virginia at the Southeastern District Invitational at Bells Mill Park. Being only a sophomore and completely new to XC as a team sport he was on the JV squad. That didn't seem to affect him as he flew out onto the course and won the race in 17:03!

Thing's were definitely going well for him. His coaches and teammates quickly saw who was on their team. They all embraced him and helped him acclimate to a very different living situation considering just months prior he was halfway across the world.

One thing was certain though, he was their missing part. They just didn't know that he would be the star of the show and their main part.

Last year, in Waleed's first XC season Douglas Freeman was a force to be reckoned with. They dominated invitational after invitational and ultimately won the 5A State Team Title. They were a very good team and seemingly the perfect environment for Waleed to grow.

Anywhere else and Waleed may have not reached his potential and this level of success. Could you become great without anyone else to reference your abilities on? With no one to help pace you?

It was the perfect storm for him, great teammates and teammates who could beat him. Each week he had a new target, beat the next guy ahead of him. He quickly moved from the JV ranks to Varsity and then each meet slowly moved up on the top seven. It wasn't until States 2014 he finally reached the top by beating his teammate Peyton Artz by three seconds with his 16:18 finish. That finish snuck him into the top 15 at states and earned him All-State honors.

Track season flew by and throughout both seasons he tallied up just five wins of which they were all at weekday meets. He was improving but still finding his niche.

This XC season something seemed to click. The season before he had a personal best of 15:53, impressive but not anything so fast it would shock someone. This season he opened with three victories all in the low 16's. It seemed as if that was his spot around 16:00. 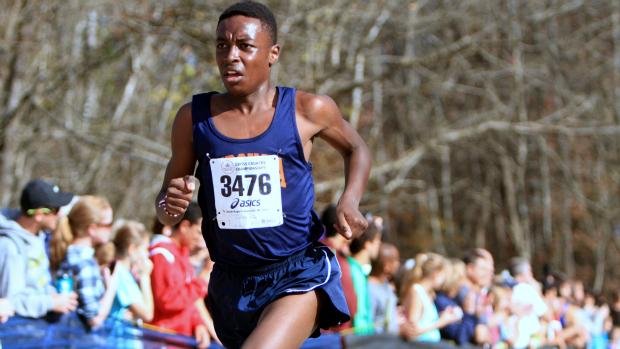 In his fourth race of the season at the Big Cat Invitational with the very speculative distance, he blazed a 15:15 winning performance. This wasn't the average run of the mill invite, it was a big deal. This race featured Konrad Steck, Ryan Buscaglia, Andrew Carlin, Miles Clikeman, Grant Northcutt, and many more and he won it!

This was a huge step for him and got a whole lot of people watching him.

He followed this performance up with a 4th place finish (15:15) at the MileStat.com XC Invitational finishing behind Lomogda, Meade (TN), and Fitsum Seyoum.

This was by far his largest race and against the best competition he had faced. It was a learning experience and he seems to be just as quick at learning as he is at running.

After another Wednesday meet victory he started his post-season. Conference 11, crushed it. 5A South Regional, crushed it. And then it was time for States. Chop full of competition and freezing conditions that were very different than the heat he grew up in. "The Pace of Genius"

It was states time and he was ready. He laced his spikes up, did a few run outs, and put his foot to the line and off he went.

What happened next was craziness and genius all bottled into one. He blitzed through the mile in 4:43, which this weekend was also known as Andrew Hunter's pace! It was insanity to think he just opened as fast as Hunter despite the fact his PR was 55 seconds slower.

This grueling pace saw his lead grow to 10 seconds through a mile. But wait, at two miles in he clocked 9:50 and still held onto a 13 second lead. It was craziness still but it was starting to make sense.

Up the final hill and around the busses he went. He made the sharp turn and along the fence he drove using his powerful legs to keep pushing harder and faster towards the line. With every step he took he came closer to winning all whilst his race strategy looked more and more like the work of a genius.

He crossed the line exuberantly in 15:41 and the strategy worked out perfectly. He won by a margin of 15 seconds all thanks to running the untraditional way.

He wasn't done though, his eyes were set on a bigger prize. He wanted to go to Foot Locker Nationals.

With this on his mind and a whole lot of confidence from states he took to the course at McAlpine Park in Charlotte, NC. Despite the addition of 70m to the course was still able to run a personal best when it mattered most in 15:10.

The time wasn't what was important, he could have cared less about the time. What he cared about and what he achieved was a berth to Foot Locker Nationals, the highest honor in our sport.

Just as he crossed the line he realized what he had done and it set in. He was a Foot Locker Finalist.

Waleed has gone from Jordan to the US and from 21 minutes to 15:10 in just over a year. His drive is undeniable and his story is unforgettable and sometimes it seems everything falls in place right at the right time.