Now that competition is over for the day we can safely take a step back, or for most of us, let the shock subside and see that today was the single greatest day in Virginia track and field history. Highlighting this day were three state records and Drew Hunter's national 3K record. It wasn't only these performances though, top to bottom this was a huge day for VA track and field and that saw the all-time list be rewritten and the national leaderboard completely changed.

Though his race may have been one of the last to happen this week, Drew Hunter (Loudoun Valley) capitalized on his stellar competition filled with professional runners to really make an effort to break the national record. Down in North Carolina Andrew Hunter laced his spikes with some of the best in the entire world at the JDL fast track. Against collegiate and pro runners alike he even split throughout the race. He came through the 1500m mark just at 4:00. He would then consistently split until the final laps where he just had to dig deep and push with everything he had. His mom called it a "rust buster" since he hasn't raced since Foot Locker but he certainly still knows how to compete. He ultimately finished in 7:59.33 to break King Edward Cheserek's previous record by five seconds. 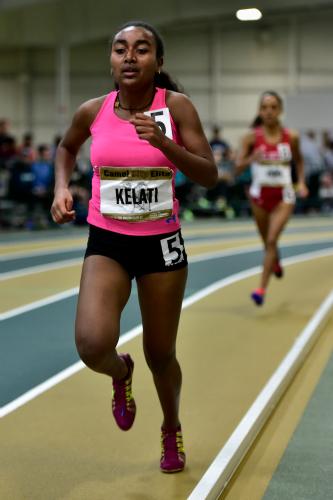 On the same track Kate Murphy (Lake Braddock) and Weini Kelati (Heritage) also had historically great races. Also running the the 3K was Weini Kelati who just like Drew Hunter had not raced since Foot Locker. Her legs no doubt needed the rest but she was ready to race. She eventually would go on to run a stellar 9:19.99 in the 3K. That is a huge US #1 mark and also US #4 all-time. It was also just off of her 9:12.32 pr from two years ago. This proves it once and for all that she is back in 9:12 shape! She will likely not race again until indoor nationals. This time would also be a Virginia State record but we do not keep official lists for this event. 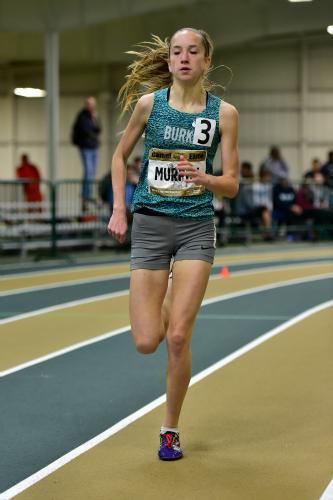 After all the hype of those races, Lake Braddock junior (yes, junior) Kate Murphy took to the track in the invitational Mile field. She opened in 35 and consistently hit her splits throughout. Just like Pan Ams where she finally showed us her true speed last year, she kicked it into gear and sprinted the final 200 in 33 seconds. Her time of 4:43.87 is so fast it broke the state record for 1600. This means her time converts the state record down from 4:44.40 (Caroline Acorta - 2014) to a crazy fast 4:42.22. This goes hand and hand with her US #2 all-time 1000m performance just a few weeks ago.

Kate's meteoric rise to the top of the nation is no surprise though. She is one of the hardest workers and definitely the toughest competitor. She knows how to win and also how to want to win. Being only a junior is a blessing for VA T&F as she moves closer to chasing down every single national record. She is a year ahead of where Sarah Bowman-Brown was at this point! 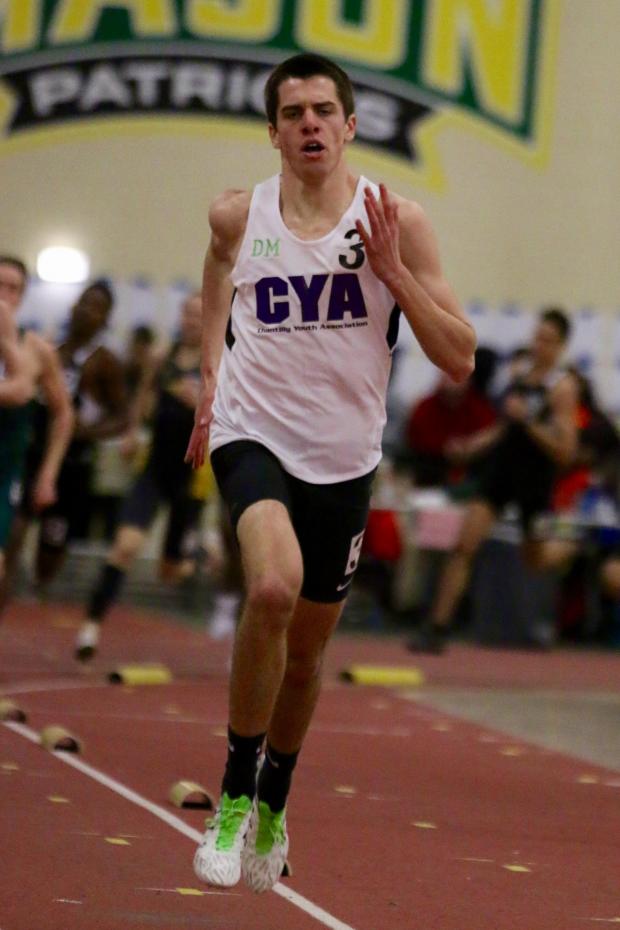 Also running "unattached" at a collegiate or professional meet was Chantilly's Brandon McGorty. Up at basically his home track at George Mason he made the most of the short commute and powered out a US #1 1:51.98 to rank almost two seconds faster than anyone else in the entire nation. This is just shy of his 1:51.50 personal best from last year but is also one of the fastest flat track 800's ever run in the US.

Brandon already ranks US #1 in the 1000 and apparently wanted to show the nation that he is really the guy to beat in the mid-distance races this season.

"We were very pleased with the race...Brandon was nervous to get out and test himself against a tough field...and (having this meet local) it gave us a last minute opportunity to take advantage of the competition. This is a process onto even larger long-term goals." - Chantilly's Coach Gilchrist

Though all of these performances were great, the best probably to witness though had to have been Grant Holloway's 25-11.50 long jump on his 5th of 6 attempts. He got the crowd going and clapping as he hyped himself up. He sprinted down the runway and literally as he was in mid-air let out a loud WHOOOOO in celebration. He 100% knew he had just jumped a monster mark. The crowd went wild and was visibly anxious with excitement to hear the mark. Then the official said 25-11.5 and the crown roared. He had not only broke the state indoor record but also the outdoor state record as well. This mark was also the best US jump for a high schooler since 1989! It ranks #3 all-time in the United States. 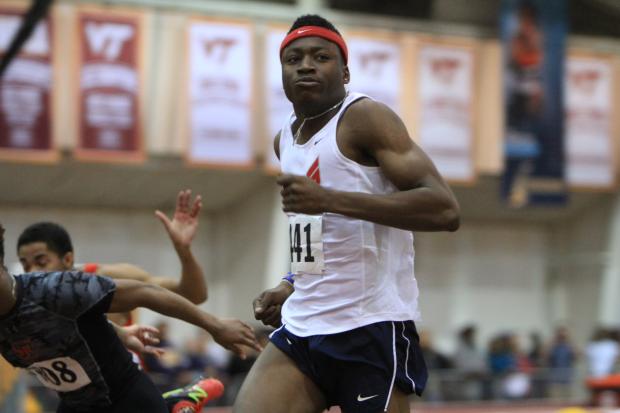 He wasn't finish though. Just minutes later he got in the blocks for the 55m dash. He blasted out of them and to his own account hit his first three steps perfectly. He said he even slowed down a little at the line as he crossed in a US #1 6.22 to rank VA #3 all-time. You could say his "keys to success" are definitely working this season.

For those that don't know, Grant considers himself the third Lyles brother. His other two brothers, Noah and Josephus though had quite the meet. They both races the 4x200, 300, and 4x400s just in a single day. Call it preparing for The Penn Relays.

In their first event at 9:30am they took to the track in the 4x200 against US #1 Archbishop Carroll (DC). Both teams were stacked and ready to go. The Lions of Carroll got out to a great start but Noah Lyles on second leg brought the team back even with them. It was then Josephus' job as anchor to once again pass the Lions and take T.C. Williams home to victory. This time of 1:27.29 is VA #2 all-time and US #8 all-time. 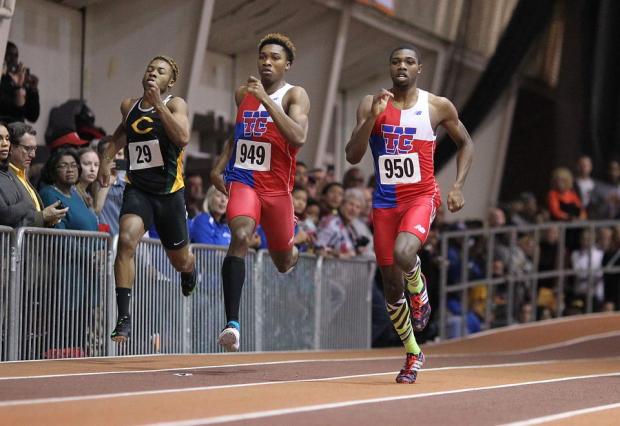 Next in the 300 both Lyles brothers faced off  in the final section of the 300. This race was the fastest in the US history top to bottom. It equaled the record of having four guys break 34 in a single meet. It almost had five but Michael Davenport of Woodberry Forest was disqualified. He would have been right there with Josephus.

Noah started out strong but never pulled it away. It honestly looked like he was saving something but after looking at the time you could see the race was just that fast! He crossed the line first in a US #3 all-time 33.18. Josephus was second in 33.26, US #6 all-time, and Western Branch's Micaiah Harris was fourth in 33.87 out of the unseeded section. They were also joined by Maxwell Willis of Archbishop Carroll who was third.

It was again an epic battle in the 4x400 between "All mets" TC Williams and Archbishop Carroll. Both teams were supposed to run right with each other and hopefully break the VA state record. But TC Williams started poorly and cruised until the line but of course Josephus didn't really like that plan and still split a 47.60 on anchor to move the Titans up. Archbishop Carroll won that event in a US #1 3:18 time. 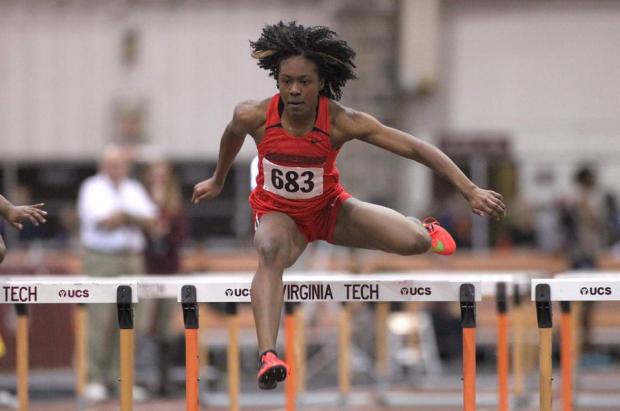 After all of those performance you may just want to remember those Titans but you certainly didn't want to go against Team War this weekend. Of course they are also known as Nansemond River. Their star, Brandee' Johnson got things started with a huge 7.82 performance in the 55H. That time ranks her #4 all-time in the state of Virginia and was a significant improvement on her 7.95 personal best equalled in the prelims Friday evening. If that wasn't enough for her she then toed the line in the very next event, the 500.

Against tough competition Brandee' kept her form and speed throughout the race. A race that she is not typically, if ever, entered in. She did though show that she is in better shape than ever as she clocked a US #1 1:12.88 to now rank VA #3 all-time. This race was so stacked it had US #1, US #2, US #4, and US #5 all in the final seeded section! Her junior teammate, Syiara Richardson finished in 1:14.48, VA #22 all-time. Watch that race here! 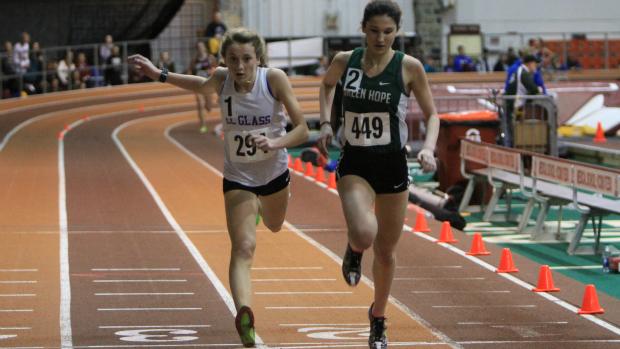 Speaking of which, Western Branch's girls team put on quite the show throughout the meet. Faith Ross finished second in the 300 at 40.00 while freshman Shadajah Ballard lit up the track running 7.11 in the 55 prelims. Their relay team won the 4x800 in a US #2 time of 9:21.58 with only three of their top legs running.

Emily Harrison (Battlefield) and Autumn White (Jefferson Forest) both tied the state leading height of 11-6 in the pole-vault as they went 2-3. They also with this mark now rank 20th all-time.

On the boys side of things at the state level basically the entire leaderboard was torn apart this weekend. We saw nine new state leading performances out of the 15 events. Aside from the previously mentioned ones we had Bethel and Glen Allen trucking in the relays. Bethel ran 3:23.07 in the 4x400 to finish behind Archbishop Carroll's US #1 performance and Glen Allen's boys became the first team this season to break the eight minute barrier. They clocked a 7:59.30 to now be VA #1 and US #5. 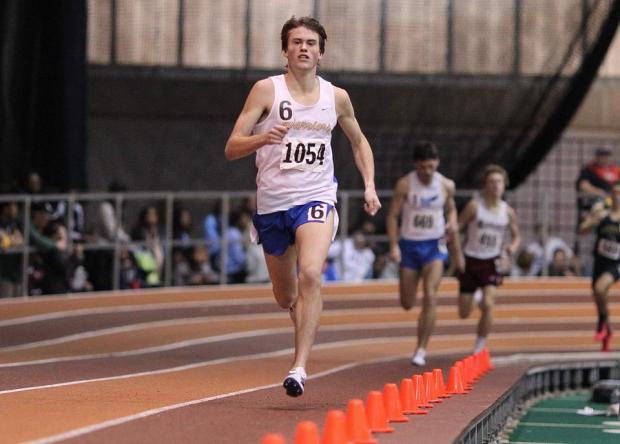 The final guy to have a state leading mark this weekend was Western Albemarle's Gannon "the cannon" Willcutts. He ran a complete solo 9:05.49 meet record in the 3200 Friday night, beating his coach's meet record of course. Though most thought his legs were shot from that, the Foot Locker finalist and 3A State XC champion waited until the final 150m to blow past Tyler Cox-Philyaw in the 1600 final to run a VA #1 4:13.79. That time was a US #2 1600m only performance. Cox-Philyaw (Millbrook) ran a solid 4:17.37 to now rank US #7.

Aside from all these big winners there were too many great performances to count. Well, technically we did count them and there were a whopping 443 nationally elite performances alone at the Virginia Tech Invitational. This weekend was simply huge. We saw numerous records get broken and many athletes moving way up the all-time list.

This weekend and specifically today, January 30th has to go down as the single greatest day in Virginia track & field history.