There is a lot of coverage this entire week! Even too much to keep track of. Here is a highlights edition of a recap for every state meet this week! 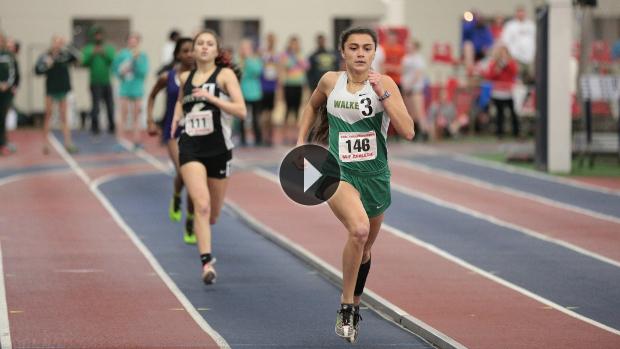 Kicking off MileStates week for the VHSL was the 2A State Classification. This meet was filled with some of the best races and finishes of the entire season. The biggest story of the meet though has to be Maggie Walker's Shanthi Hiremath who made history this week after the 500m dash. After she crossed the line first she became the first athlete ever to win five individual events in a single state meet. To take home this honor she took home the honors in the 55H, long jump, triple jump, 500, and the pole vault. If that wasn't enough she also ran the second leg on the Green Dragon's winning 4x400.

On that relay she was joined by teammate Emma Call who also had an impressive state meet. Emma took home the 1600 and 1000m titles to help lead Maggie Walker to another state team title.

The boys didn't have quite as easy of a time winning their team title but they certainly did everything they needed to do this week. Ryan Buscaglia and company took care of business from the start and never looked back as they won another state title handedly.

Livi Pearson and East Rockingham also had a great meet on the boys side thanks to his stellar sprinting skill to bring home some much needed points.

Unfortunately though the Auburn boys moved down in the team scoring, they would have finished 3rd, had it not been for a costly disqualification of a runner who had competed in four events. 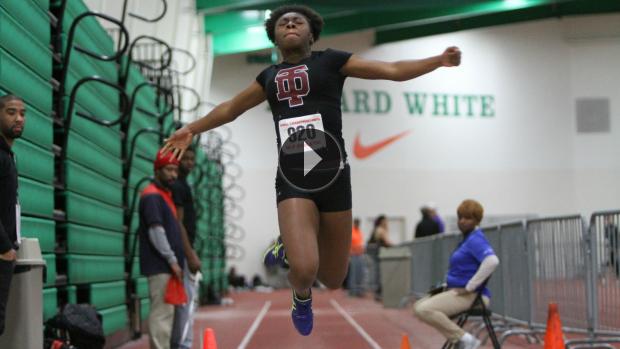 They call this the big one for a reason and that reason was very evident yesterday. The meet started off with a bang and no one ever looked back as the excitement kept growing and growing. The two biggest events of the day were the triple jump and 4x800.

In the triple jump Thomas Dale's Titiana Marsh put on a show leaping over 40 feet multiple times. Her jumps were highlighted by her 6th and final attempt where she hop, skipped, and jumped a sophomore national record 42-4. This now goes along with her freshman national record from a year ago. She also had one jump that was a small foul that seriously went over 43 feet!

In the final girls' race of the day we were treated with seriously the greatest relay race ever. We had West Springfield, Patriot, Lake Braddock, and defending champs Western Branch. The race started out strong for three of these teams but Lake Braddock was way behind. Western Branch used their ace (Amanda Thomas) on second leg to get them solidly in the lead. Onto third legs and we had Lake Braddock in last. Kate Murphy though ran third and showed everyone why she is the best distance runner in the nation as she split a 2:09 to walk down the entire field.

Braddock and Western Branch's anchors battled neck and neck as they pulled away from the chase pack. Everyone's eyes were on them as they bumped and battled coming down the final stretch and then the crowd erupted! Out of nowhere came Patriot superstar Rachel McArthur sprinting down the stretch to bring home the win! She split a crazy 2:10 in one of her few races of the season after injuries. This race will go down as one of the most exciting and hype races ever.

In the prelims of Friday's races things were just as fast. Both top seeds, Faith Ross (Western Branch) and Grant Holloway (Grassfield) easily qualified into finals but they definitely had close company through the prelims. Western Branch teammates Harris and Williams in the 55H and Pitchford (James River) in the girls 55H pushed the competition as a whole into finals too.

In the 55 dashes it was a stars showdown between Lyles, Lyles, Holloway, and Harris where they went 6.31, 6.31, 6.40, 6.40! They all advanced to the finals for what is going to be a legendary race with tons of team points at stake!

Lauryn Ghee (Grassfield) easily advanced in the girls 55 dash as the top seed into today's final.

Also on the field was Tim McEvoy (Osbourn Park) who was nothing but clutch as he moved from third seed to state champion.

You can basically call this Bria Stith's classification because she completely dominated day one's competition. She jumped only three times in the triple jump and never looked back because she also had to go over to the high jump and take home that title as well. She wasn't done though as she qualified to the 55H finals as the second fastest qualifier behind Brandee' Johnson (Nansemond River). Brandee' also qualified as the top girls 55 runner too.

In the girls' relays things were just as exciting as 6A with Deep Run and Albemarle battling throughout but it was Albemarle that has the anchor to bring them home. The boys' race too was killer with Glen Allen coming from behind to win in 8:00! 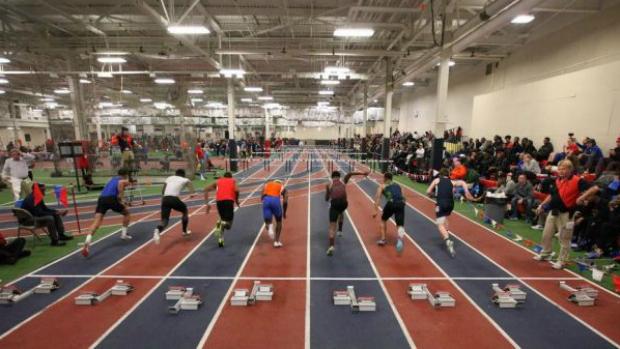 In the final meet ever at Tolsma the local teams of Liberty Christian and E.C. Glass started off the right way! E.C. Glass took home the girls 4x800 title in a very impressive 9:21.65 performance. LCA picked up crucial points in the boys' 4x800 finishing second behind Fauquier. It was a tough race too with Midlothian just behind them.

In the qualifying rounds it was a huge showcase of a lot of talented athletes. Falks and Jackson both ran very well in the 55H prelims while Towns, Parker-Love, and Tucker all blasted fast times in the 55 dash prelims.

Ben Beatty (Courtland) launched an impressive 54-6.5 in the shot put to take home one of the hardest titles around the state.

Rustburg's Isiah Garland ran a quick 6.43 to qualify to the finals in the 55.

Over in the field events, Jordan Patti took home the title in the shot at 53-2.5 while Griffin Kowal had a great pole vault competition and went 14-3.

Maya Hanks, Naomi Whitaker, and Amira Aduma all had stellar prelims and field events to get ready fro what could be a historic day Saturday!