GREENSBORO, Nc. - When individuals think of powerhouses in the state of Virginia two schools definitely always come up. These two schools that absolutely dominate the track scene in Virginia are Nansemond River and Western Branch high school.

This Saturday both of these teams put on a show by winning national titles in the relays and finishing with All-American finishes in others. One of their highlight performances though were a pair of state records set just a few minutes apart.

First up was Florida Bound senior Brandee'Johnson representing Team War. She blasted out of the blocks and closed strong to finish as the national runner-up in the 100m hurdles. Her time of 13.08 was one of the fastest ever in the country and broke her previous state record of 13.18 by a tenth.

Though she is not done yet, this race coupled with her teams' 4x100 and 4x200 performance show why she will be in the S.E.C. next year... she has serious speed.

Not even five minutes after they crossed the line Team VA was back in action in the 4x800 with Western Branch. 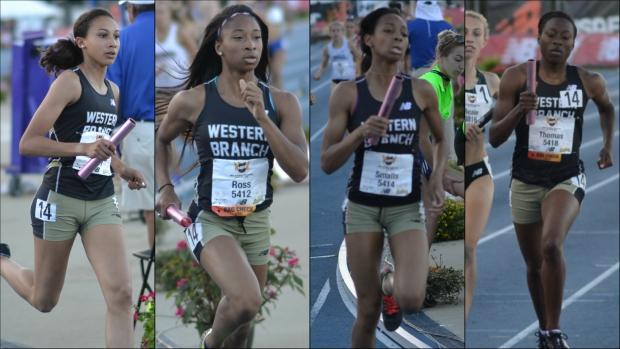 Adriana Shockley opened up for the Bruins who entered the meet having run US #1 8:51.61 just two weeks ago at the state meet.

Coach Claude Toukene must have wanted to change something on the fly as just before she handed off to Martina Smalls, Faith Ross ran out to the exchange zone and switched spots with her.

At the time the move was questionable but Faith Ross showed us one last time she could not be denied. She received the baton in 10th and after just 200m she was in first and never looked back. She then handed off to Martina Smalls after a 2:09 split.

Finally anchoring the Bruins was senior Amanda Thomas who anchored in a monster 2:08 but finished just shy of beating out a 2:07 anchor for Shendendowa.

Though they finished a close runner-up, they did break their own state record by finishing in 8:51.03.

It is almost fitting to have Saturday end this way for Team VA. Though both programs have their differences, they also have the similarity of being state record holders and excellent representatives of Team VA at Nationals.