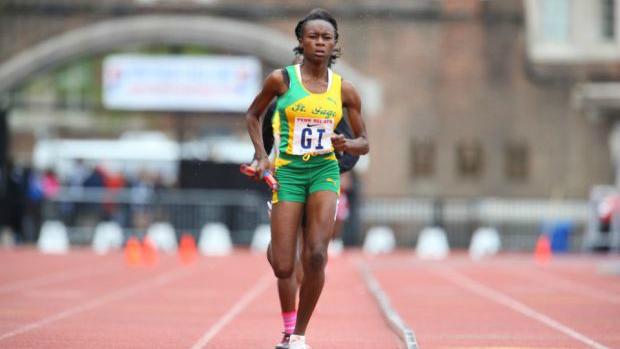 LYNCHBURG, Va. - Meet management is excited to announce that for the first time in United States history, Team Jamaica will send a high school relay team to compete indoors. This team, St. Jago (St. Catherine, JAM) is one of the most storied powerhouses on the island and has won the Girls' ISSA Champs four times. They are also one of only two high schools to have won both the Boys' and Girls' Championships in a single year.

This historic entry will change the landscape of indoor track and field internationally and comes 53 years after Kingston College first attended the Penn Relays and began the tradition of Jamaican teams traveling to the United States.

Last Penn Relays would have been a huge meet for this team but unfortunately they were beset with injuries and misfortune in both the 4x100 and 4x400m relays.

"We at The VA Showcase are very excited to be a part of history. And even more excited for that history to be happening in Virginia. St.Jago's coaches and those who made the introductions for us can not be thanked enough for helping make this happen.
Our goal behind this is to create an atmosphere and field of competition moving forward that rivals The Penn Relays but for indoors. " - Nolan Jez, Meet Director

Though St. Jago is definitely the favorite to take home the girls' 4x200m title, they will have their hands full with some very fast teams and individuals in this event as well. Some likely competitors for them will be US #1 Grassfield, The Bullis School, Western Branch, Cheltenham, Elizabeth Seton, Parkland, and many others.

Meet the athletes making the trip up to The VA Showcase on the following page.

Here is their 2016 Penn Relays 4x100 that ended unfortunately too soon. They were well on pace to run sub 45.