It was just a year ago that everyone thought we were crazy to predict that five VA boys would qualify for Foot Locker Nationals so hear us out first before thinking we are crazy on this.

This weekend is going to be fast. The grass will be cut short, the weather is going to cooperate, and best of all is the fact that Waleed's race is the 10th race on the Great Meadow course this year. He is going to have a nice firm course to traverse and he will cross the line just under Andrew Hunter's 14:41 state meet and course record.

Already this season Waleed has put on a show race after race displaying his racing acumen and range of strategy. He has done the normal sit and kick and the blazing 4:31 opening Mile strategy. No matter the strategy though, it has all ended the same for him this year as he has gone a perfect five for five. Just one win shy of Andrew Hunter's six win season when he would go on to break the course record.

The number of wins is not the only thing both of those guys share in common though. Both entered the meet having won just one XC state championship prior to this and both had similar pr's as well. Waleed enters the weekend with his 14:49 best run at MileStat and Drew ran 14:46 that year at Great American. 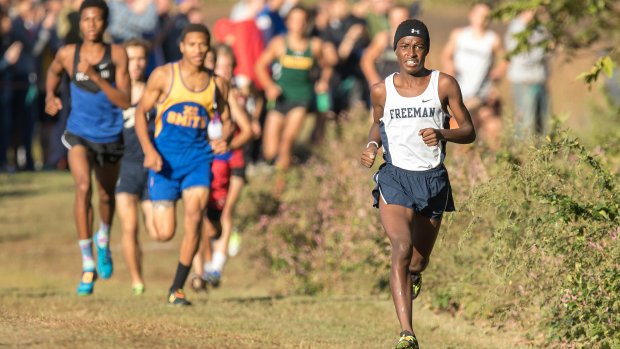 Waleed though has two things on his side this year. He has a harder record to chase and it looks like he will be running in the best conditions since 2013. This weekend is catered towards some fast times.

To break this record and any Drew Hunter record you need to buckle up and take care of business. He has done this so far this season but the true test will be can he do it solo at Great Meadow like Drew did. He will have to open in 4:33, come thru two miles in 9:13, and bring it home in 5:26 over the final 1800m. He is more than capable of doing that but he will all but likely be doing this by himself.

It is almost a certainty, and rightfully so, that if he opens in 4:33 the field will drop him. They will let him go and work together to see if they can reel him in late in the race. That will make it very hard for him to take down this record because after that first mile, he isn't going to see or hear really anyone until the final 800m. That is the part of the race he will really have to work on.

Don't get us wrong, Waleed is not quite on Drew Hunter's level yet but because of bad weather last year, Drew's record from his junior year still stands and it looks like it may only stand for a couple more hours as Waleed is going to run sub 14:40 this Saturday in states.