In under two weeks, in what will be the first high school meet ever in VA on a hydraulic track, a historic field of girls will take to the Liberty track in chase of history. Though the final section will be filled with likely eight girls all seeded under 3:00, there are five girls that just stand above the rest for this five lap, 1000m race.

These five girls all attempting to take down the 1K national record are: Kate Murphy (VA), Rachel McArthur (VA), Nevada Mareno (NC), Sammy Watson (NY), and one more girl yet to be officially entered but is seeded at 2:47. The record they are chasing is Sarah Bowman's (Fauquier - VA) 2:43.40 set back in 2005 on Virginia Tech's banked track.

The 1,000m run is a very interesting event. It is longer and more fair than a 800m run. It is truly the place where sprinters and distance runners meet and are neutralized from either speed or endurance. This race will take tact, skill, and a lot of talent to win.

Right now it is looking like the final section will be an entire sub 3:00 field with potentially one runner seeded at 3:00. That would mean you can expect a quick start and race. Minus the one athlete not officially entered, the field would be Mayo, Witt, Rennyson, Beckner, McArthur, Mareno, Murphy, and Watson.

Out of the five top seeds in this race, the slowest is seeded at 2:49 which is currently US #1. The fastest is 2:45.32 which was Watson's junior national record last year but only broke Murphy's mark by .04 seconds. Both of those times last year were solo efforts.

The seed times are amazing yes, but they are only half of the story as these five girls are absolute winners. 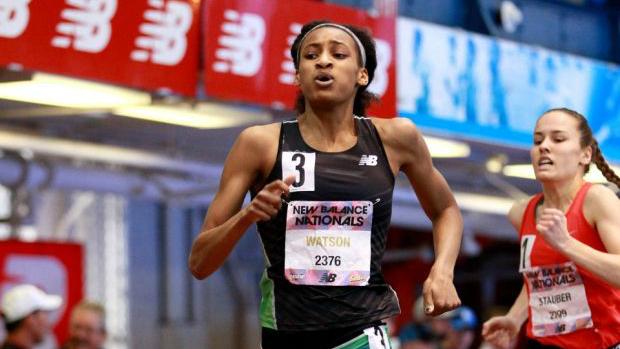 Nevada Mareno, she is entered at 2:49 but ran that back in 2015 as a sophomore on a flat track. She went on this year to finish a very close runner-up at the Foot Locker National Championships. Needless to say she is 10x more of a track athlete and very much improved from 2015. She is capable of throwing down a 2:43.

Next up is Rachel McArthur who is your current US leader with her 2:49.80 season best. She opened with that mark at the Hokie Holiday festival and after the first 100m was not even close to any competitor. She has run 2:06 for 800 and 4:45 for the full mile. She rarely runs the 1K and it seems like it could actually be the perfect distance for her.

Seeded second in this race is Olympic trials athlete and Virginia state record holder, Kate Murphy. She owns the second fastest time ever for the 1K as a junior and even briefly held the national class record with her 2:45.36 best. Most impressively though she has gone 4:07 for 1500 and 9:10 for 3K.

Finally the top seed in this race is two-time World Youth Champion Sammy Watson. She is the junior national record holder for this event with her 2:45.32 best and has run 2:02 for the 800 as well. Her accolades are endless but the real number to know is 79. That number represents how many races she has won in a row without dropping a loss to a high schooler in anything 400m-3K.

All of these girls are champions and for the first time will all see girls right by their side late in the race. It will be the greatest 1K ever for preps.