The Lady Grizzly kept the field judges busy on Saturday, setting not one, but two state meet records, en route to her 6A girls' championship win, capped by a winning throw of 46-1.75, which came just 30 minutes after her 44-9.25 set a new state mark. This happened just one day after her best discus throw destroyed another state meet best by 13 feet.

Were the records expected?

The senior thought for a second, and then gave her most sincere answer. "No, I didn't. At least, I didn't expect to PR like I did. I just went out there and did what I had to do."

If Saturday was the whipped cream and cherry on top, then Friday provided the strawberry shortcake for Gorum.

Already holding a ten-foot lead as she approached her third discus throw, Gorum wound up and uncorked a new PR and state record of 151 feet, and an inch, doubling her lead to twenty feet. Gorum would eventually reign victorious, sixteen feet better than her runner-up. However, it was good news for Gorum to see that second place went to her teammate Chelsea Wallace (135-1). Another Grizzly throwing partner, Madison Graham, placed fifth with her toss of 120-3, giving Grassfield a well needed 22 points, and an early team lead on Friday. 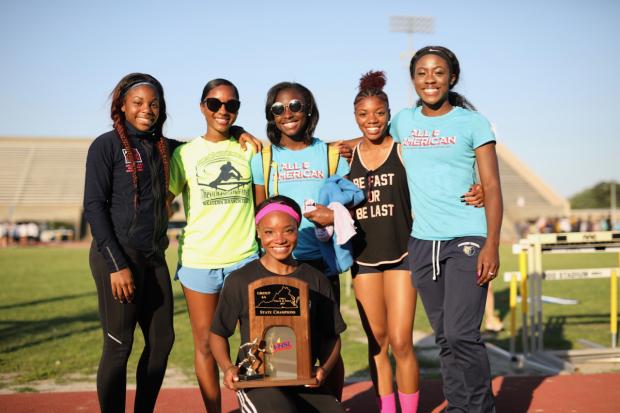 The Grassfield's girls' team, and head coach Leroy Harper, eventually tied with Lake Braddock for second as a team with 62 points, with Western Branch collecting a fourth consecutive girls' outdoor title with their 141 points. Speaking of her team's effort, she was free to share the wealth. "We had a good (weekend). My teammates showed up."

But Gorum's performance was the brightest light for Grassfield. Her new marks added two feet to her best shot throw, and three to the discus. Asked about any hidden motivation, the Florida A&M-bound thrower again minced few words.

"(Throwing) Coach Nixon's been getting on me, and (fussing) me out." In a moment of reflection, she found a second answer. "I wanted it. I wanted to win two state titles and go out with a bang!"

The season isn't over for Gorum. She has two more meets before heading to Tallahassee, FL to compete for the FAMU Rattlers and major in secondary education in her quest to become an English teacher.

First up for Gorum is the Queen Track Classic in Richmond on June 10. The following week, she will finish her prep career at the New Balance Nationals in Greensboro, NC.

Her work isn't quite complete. Gorum said that she'd like to eclipse 160 feet in the discus and set a new best in the shot put.