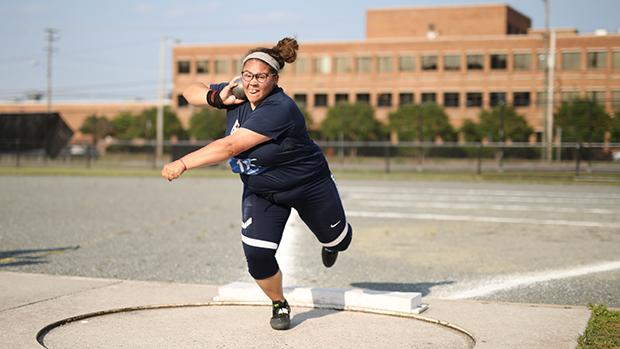 Ebonie Whitted and Chelsea Wallace provided one of the day's best 1-2 scoring punches for their Grassfield team. On Friday, Wallace lofted the discus 149 feet and four inches to win the event by over 19 feet. The following day, Whitted unleashed a shot-put bomb - 47 feet and 7.5 inches in all, to break the state meet record of her former teammate Taylor Gorum and win the other throwing event.

However, Gorum's state record in the discus of 151 feet, one inch held on for another year, but the state and school record may not hold up past Nationals.

"As long as I keep working," said the William and Mary bound Wallace. Asked if the heat, which sizzled across the field holding the discus event, played any factor in her throw falling shorter than it could have in thinner air, she added, "I don't want to make excuses."

"I was kind of happy with the meet record," said Whitted, who will be attending and throwing for Bowling Green (OH) next year, before adding, "You know, Taylor's here. She just got back from (NCAA) regionals."

Sure enough, seated on the concrete base of a stadium light was Gorum, not as noticeable with outdoor wear, instead of a track uniform, and glasses.

It was pointed out that the day before, Seth Harrell, Grassfield's former state champion in the shot put, had been seen in the discus area. "Oh yeah, everybody comes back," said Whitted, with a nod of affirmation from Wallace. 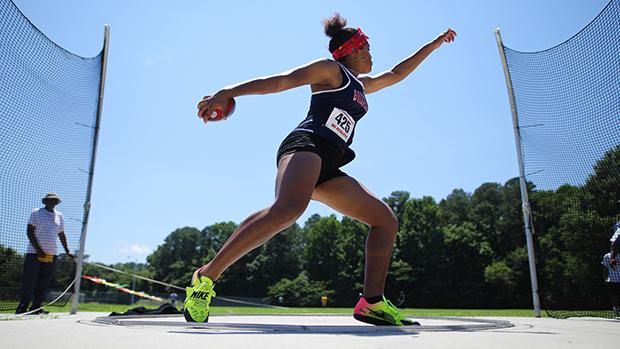 Part of the success of the Grassfield throwing program comes from the continuity. "There's a home feeling with our team and everyone is welcome back," said Whitted.

The immediate benefit of training with former teammates during championship season, at least for the Grizzly throwers, is that many of them are now throwing at the college level, including Gorum and Harrell. With this in mind, they don't want to be shown up by the high school throwers, who in turn want to show their best to the collegians. "It's like competition all over again," said Wallace.

Holding the operation together is throwing coach James Nixon.

"I can't believe I'm going to leave Nixon," said Wallace. We go in his classroom a couple of times every day, and he has a list of drills, videos and workouts for us."

The two state champs are not the only ones who benefit. Madison Graham placed third in the discus with an impressive throw of 126-10, good enough for third place. Over at the shot circle on Saturday, Jenae Bowers, a junior, threw the shot 38-1.25 for eighth place. Added to Wallace's second place effort (41-11.5) in the shot, the throwers combined for 35 points, elevating the Grizzlies to a runner-up team finish with 52 points.

"We're happy to contribute," concludes Wallace, "because we have two events and two events only."