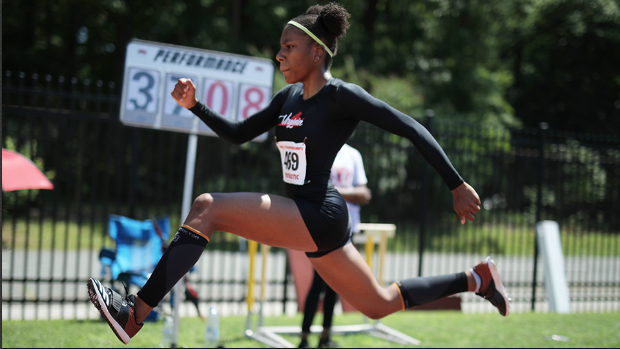 The Hampton girls finished the 5A state girls meet in a surprising third place, to Nansemond River and Stone Bridge. More surprisingly, the bulk of their points came from a trio of ninth graders who should ensure that the Crabbers stay near the top of the 5A ladder for the next three years.

Jumper Jordan Hardy led the way. During indoors, Hardy was seeded first for the long and triple jumps and finished in the top four for both. With a state meet's experience behind her, Hardy maintained more focus at Todd Stadium, particularly on Day 1, when she tacked on over a foot to her previous best in the triple with a hop, skip and jump of 40 feet and five inches. The mark made her only the 10th female prep jumper in Hampton Roads history to surpass the 40-foot barrier. It was also good enough for Hardy to claim second place and give Hampton eight points on the first day.

Hardy's best before her final jump in the finals was 38-2.75, so adding over two feet was a surprise.

"Before my last jump, I was nervous because I knew I was competing against some other excellent jumpers. Once I completed my jump, I was surprised I had jumped so far since I haven't had any big jumps this season."

Hardy entered the day with a season best of 37-4. Stone Bridge's Zoe Rice overtook Hardy on her final jump, the last jump of the competition, with a 40-7.75.

On Friday night, girls' coach Ron Bayton spoke of Hardy, as well as his other freshmen.

"They are just carrying on a long tradition," said Bayton, perhaps thinking of some of his former prodigies, including Olympian Ti'erra (now T'eara) Brown, Tori Ray, Chantel Ray, and others.

On Saturday, another ninth grader, Eleyah Armstrong, made her presence known to the Todd faithful. Armstrong, seeded eighth in the 100 final with a 12.34 prelim time, burst out of the blocks and mowed down several potential medal winners to earn second place in a new personal-best time of 12.14.

In addition, Jaylin Rice, yet another freshman, placed eighth in the 300-meter hurdles (46.46), just behind junior teammate Faith McMillan, who was seventh in 45.86. McMillan also placed third in the 100-meter hurdles with a time of 45.86.