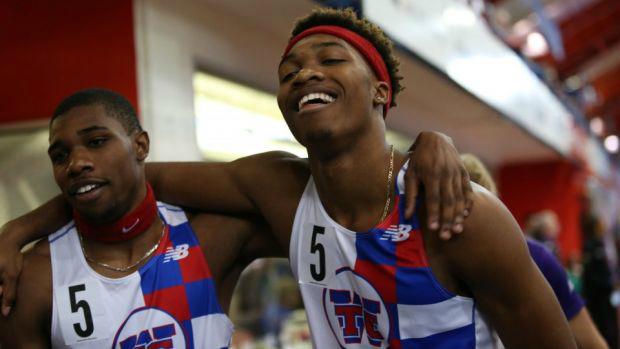 Next Monday night, the commons area of Alexandria City High School (formerly T.C. Williams) will transform itself into Party Central as one of the Port City's favorite sons, Noah Lyles, begins his quest for a gold medal in the men's 200 meters. The event will take place from 6-10:30 PM.

Keisha Caine Bishop, mother of Noah and Josephus Lyles, was at ACHS on Tuesday to begin preparations for the event, but beforehand explained some of the particulars of the evening. "We are happy because the (Alexandria) fire department is going to allow 500 people to attend," said Bishop, herself a 10-time All-American sprinter during her competitive days at Seton Hall University. "We wanted to make an event out of Noah's first race, so we will begin with games, races, and giveaways for the kids outside, and then everything will move inside.

The first of the seven 200-meter heats is scheduled to begin at 10:05. Lyles is the preemptive favorite, having run the fastest personal best time of 19.50, as well as winning the American Olympic Trials earlier this month in Eugene, Oregon (in 19.74). The semifinals will begin at 7:50 AM (EST) on Tuesday, with the finals at 8:55 AM on Wednesday. Lyles is also expected to anchor the men's 4x100 relay during the qualifying heats the following day, or join the foursome for Friday's final.

Josephus, himself a nationally ranked sprinter, who recently ran personal bests of 10.12 in the 100 meters and 20.22 in the 200, will also be on hand to meet and greet guests.

The cost of admission is a voluntary donation which will benefit the Lyles Brothers Foundation (https://lylesfoundation.org), whose slogan "Together We Can" denotes the mission, which is to empower youth through health and wellness. Some of the foundation's events have included educational forums about nutrition, sports psychology, positive parenting, and college recruiting.