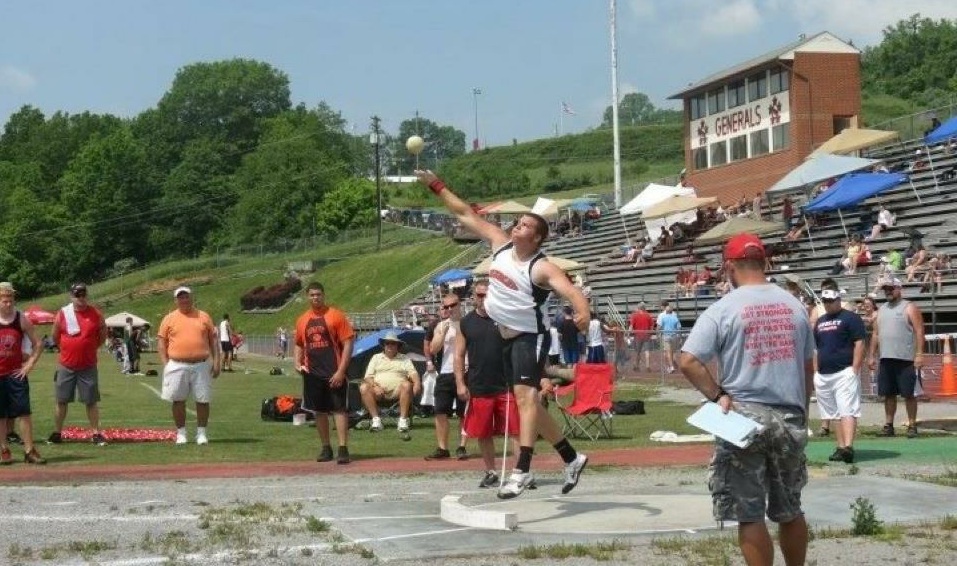 At Radford University this past Saturday, the Stonewall Jackson boys ran away with the Group A state track championship team title led by two individual stars, while a well-rounded James River girls' team were able to pull out a last second victory in the 4x400 meter relay over a formidable Strasburg squad by 5 points. The 2012 edition of the Group A State Track & Field Championships witnessed three meet records going down including one meet benchmark which had lasted for an incredible 3 decades.

Virginia High School junior thrower Nik Huffman was a double champion in the throws with his mark of 58'8.50" in the shot breaking a 30 year old meet record set previously by Fluvanna County's David Haden (56'10.75"). Huffman's state meet performance was not only a new personal best for him, but is the second best mark in Virginia this spring behind only the Group AAA state champion Taylor Frenia of Kempsville at 60'6". Huffman successfully repeated as a state champion in discus as well as his winning throw of 165'4" put him nearly 20 feet ahead of his nearest competition.

Amelia County junior Jasmine Mitchell is not only Group A's most versatile athlete, but arguably has some of the best range in abilities and events than any other high school track athlete in Virginia regardless of classification. Mitchell showcased her ability to perform well in a wide range of events on Saturday by scoring in a total of 5 events in the high jump, triple jump, 100 meter dash, 400 meter dash, and 800 meter dash. Mitchell was a state champion in the high jump at a clearance of 5'3" and established a new meet record in the 400 with a swift 55.69 clocking. In all, Mitchell scored 37 points individually to propel Amelia County to finish 5th as a team on her individual efforts alone.

When you have two great sprinters facing off like Altavista's Justin Brown and Dan River's Antwone Ferrell, fast times are bound to be produced. Brown ran away from Ferrell and a talented field in the 100 meter dash with a near meet record performance in a 10.68 PR clocking. Coming back in the 200 meter dash, Brown got more of a challenge from Ferrell as both ended up dipping under the old meet record of 21.77 with Brown as the champion at 21.71 and Ferrell as the runner-up at 21.74. Brown was a state champion two years ago as a sophomore in the 100 meter dash, but did not compete at last year's state meet. Ferrell has a bright future as only a sophomore and ran a leg on Dan River's state champion 4x100 meter relay..

There were several more double and multi-event winners in the 2012 VHSL Group A State Championships. Chatham junior Tori McKenzie successfully repeated as a state champion at 100 and 200 meters with 12.18 and 24.78 clockings respectively. McKenzie's time in the 200 was a new personal best, while she also achieved another all-time best performance in the long jump with a runner-up mark of 17'2.50".

The Strasburg girls had the star power but not the depth to overcome the James River girls for the team title, but Katlyn Ayers and Taylor Cockerille did all they could for the Strasburg team cause. The CNU bound Cockerille won the discus title with a mark of 125'5" and finished third in the shot put, while Ayers was able to defeat two worthy challengers between Hannah Rose of Wilson Memorial in the 1600 meter run and Jasmine Mitchell of Amelia County in the 800 meter run. The Strasburg junior Ayers now has a total of six state individual titles between her two in cross country (2009, 2010) and four in track as she duplicated her feat from a year ago with first place state meet finishes in the 1600 and 800. No tactical races for her fifth and sixth state championships with personal best times of 5:06.35 in the 1600 and 2:17.40 in the 800.

The James River girls needed a win in the 4x400 meter relay to overtake Strasburg for first and a team championship, which they got in 10 points from the quartet of Marjorie Grumbine, Anne Grumbine, Alyssa Ford, and Reanna Hamm. Hamm was the team's most valuable individual scorer as she tallied 28 points individually from four events excluding the 4x400 including runner-up showings in the 100 and 200 meter dash.

Manassas Park junior Victoria Dumas dominated the hurdles at the Group A State Meet. Dumas (15.42) went 1-2 with her teammate Rachel Chan (15.68) in the top seeded section of the 100 meter hurdles. She was even more impressive in her later race in the 300 meter hurdles, which she distanced herself from second place by nearly three seconds with a national caliber performance of 45.37.

In order to score as many points as the Stonewall Jackson boys did with 72 total, they needed points from many different events. Their day got off to a great start with 18 points in the boys' long jump from event champion Dylan Shirley leaping for 23'1.75" and teammate John Michael Pirtle taking runner-up with a mark of 22'9". Pirtle added a gold to his silver medal later in the 110 meter hurdles with a 15.03 first place clocking, while Shirley was an All-State performer in all three jumping events with a third place in the triple jump and fifth place in the high jump. The Stonewall Jackson boys had the meet in hand though after Shirley edged out Nelson County senior Rodrell Smith (49.97) for the 400 meter dash state title with a sub 50 second performance at 49.90. Pirtle was a silver medalist again, but in the 300 meter hurdles with a time of 41.04 as a sophomore in Central's Justin Bauserman took the victory in 40.64.

There was an outstanding high jump competition, especially among small school athletes between William Campbell's Maxie Crews and Thomas Walker's Tyler Scott. Scott cleared 6'6", but Crews was one inch better to win the competition and state title at 6'7".

John S. Battle's Brent Swiney skipped out on running the 1600 meter race to compete in the 3200 meter fresh. The decision paid off for Swiney with the first state title for the senior and one of the fastest times in meet history with his 9:33.50 performance (meet record is 9:28.60) to defeat returning state champion in junior Walker Mogen (9:46.45). of Radford. Mogen had a strong double though coming back from winning the 1600 meter run in convincing fashion at 4:22.88 to give him a 8 second cushion on second place. Mogen now has three state titles entering his senior year season and looks to defend his state cross country title in the fall.

Also returning next fall will be the Group A girls' state champion Hannah Rose, who similarly had a first and second place finish this past Saturday at the state track finals. Rose ran a personal best of 5:10.27 for runner-up behind Ayers in the 1600, while the sub 11 minute 2 miler easily cruised to the 3200 state title with her time of 11:13.20.