Do you have a wall or room filled and decorated with your running awards, medals, trophies, plaques, certificates, and achievements? MileStat.com wants to see it! Upload a photo of your wall or room showcasing your glory and life as a runner to MileStat.com's facebook fan page or email to milestat@gmail.com so that we can share it. Check out an example of an wall decorated with running awards by MileStat.com creator Brandon Miles in the photo above. 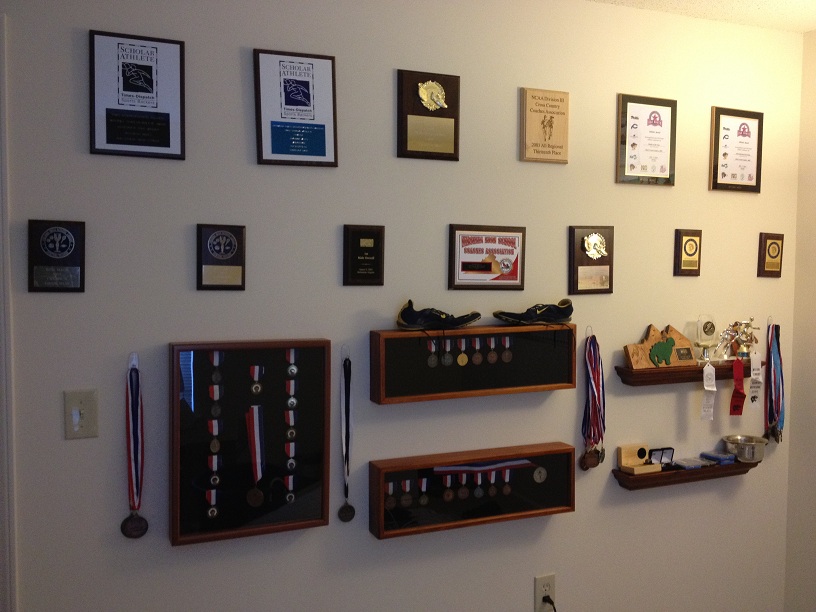 If you got your medals, awards, and running memories sitting in a box or stored right now, maybe this may inspire you into a end-of-summer project to put it properly on display. Do not have to have a bunch of awards and medals to make a wall of running memories and "glory days" (see below example). Get creative! 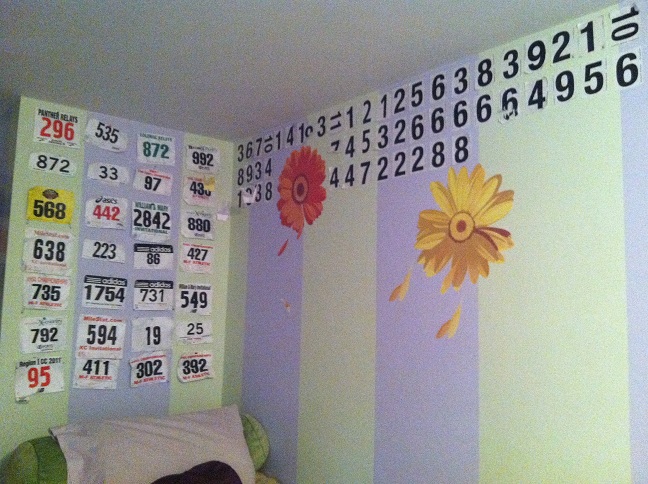 Jamestown High School distance runner Devon Mearns ('13) has taken all of her hip numbers and competitors numbers from past meets to decorate her walls. She has two more years of high school running to run out of wall space. 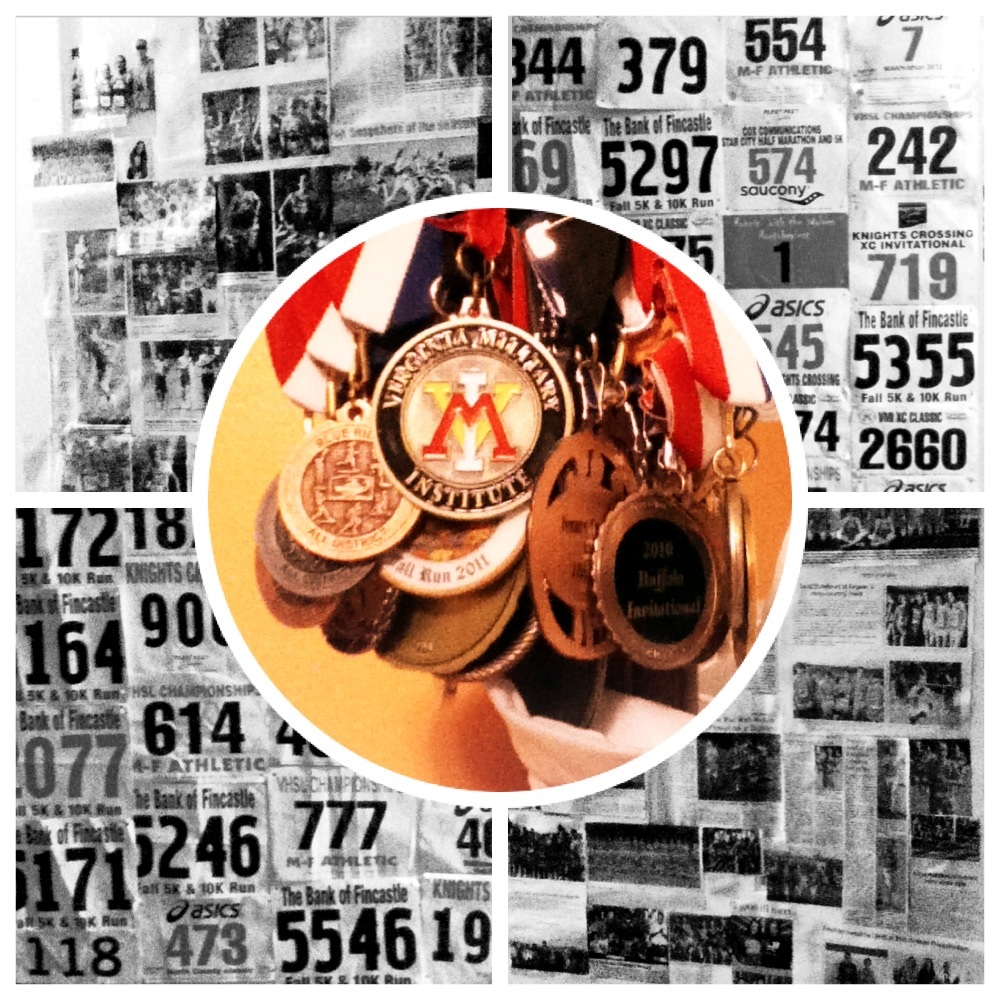 Running at Christopher Newport University in the fall, Taylor Cline of Lord Boterourt ('12) might debate bringing to her dorm in Newport News the several walls from home adorned with her running memories and accomplishment include competitor numbers, newspaper articles, and medals. She plans on doing the same with her college running as well at CNU. 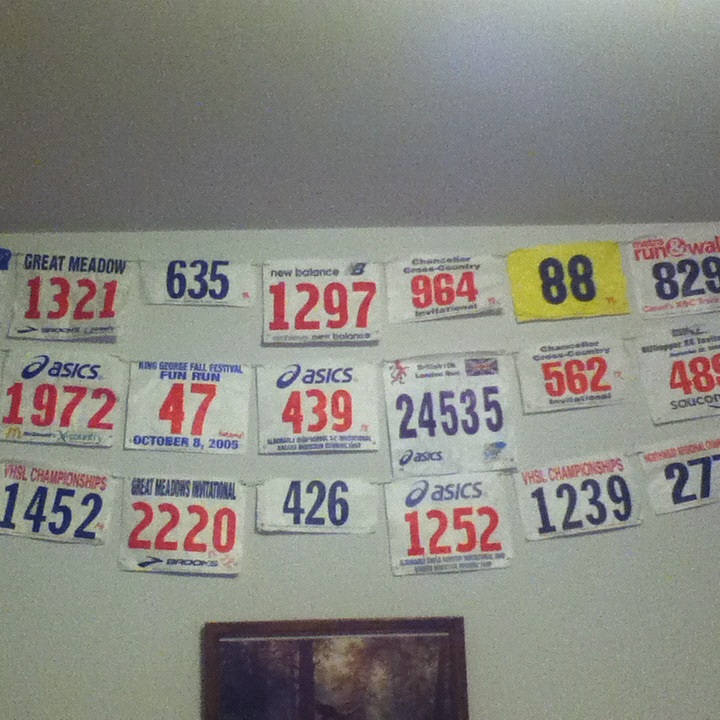 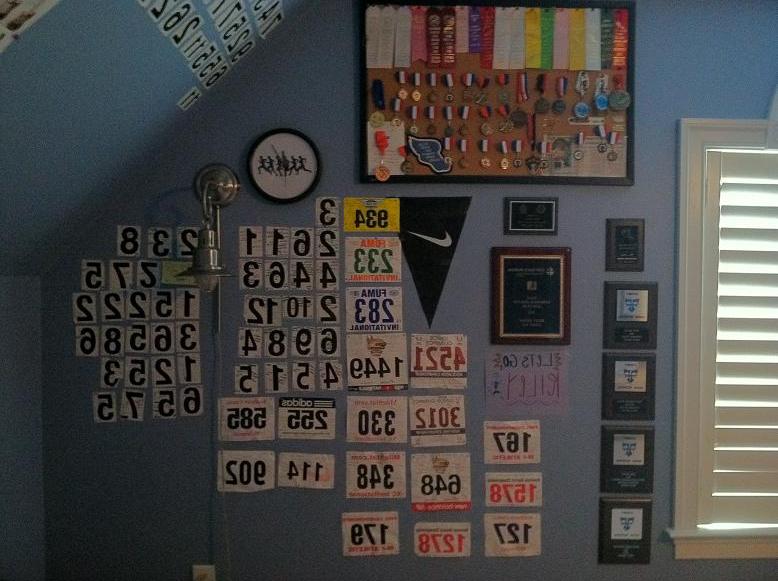 Cosby's Riley Brady ('12) has a collection of plaques on his running glory wall with the ones on the right being all team awards from Cosby (Coaches Awards and MVP awards), with the small top plaque being his 4x400 meter relay record team at Swift Creek Middle. His most prized decoration has to be the main red plaque in the middle with his CJW Comeback Athlete award after coming back from a serious hip injury and surgery. The ribbons, medals, bibs, and race numbers above span from 7 years of competitive running between 6th-12th grade in XC, Indoor, Outdoor, and Summer track. 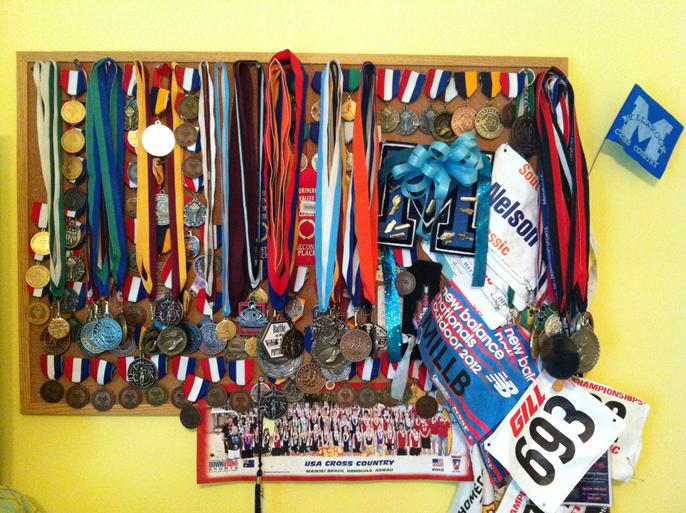 You can tell by looking at Crystal Nelson's wall that she won a lot of races in high school. The 2012 Group AA state champion at 3200 meters indoor and outdoors (as well as adding an outdoor 1600 meter state title) would have a heavily weighted Letterman's jacket if she decided to put all these medals on it. Will this corkboard of running glory travel with her to the next destination at Iowa State? 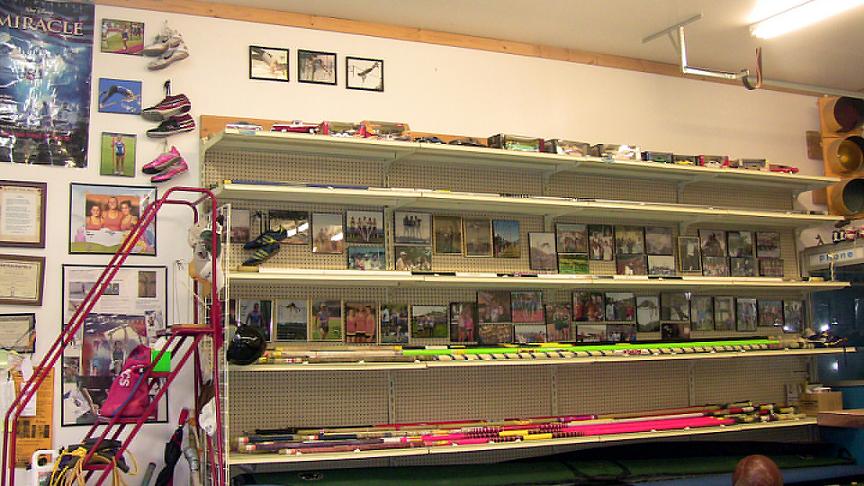 Coaches can certainly get in on the act in sending in their wall photos! Some coaches have decades and decades of track & field memories to share. Check out this wall of former Atlee and now current Highland Springs pole vault coach Kyle Bishop who has coached numerous state champions and regional champions in the Central Region over the past 30 years and has been big part over the last half of his time coaching in the development and rise of the girls' pole vault in the state of Virginia. Many photos of the vaulters whose lives and performances that he helped shape. 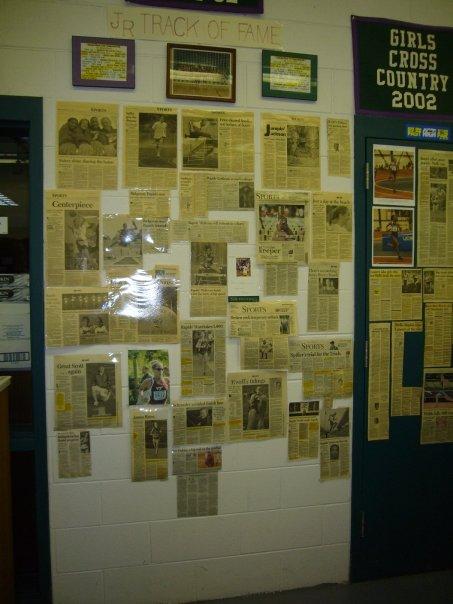 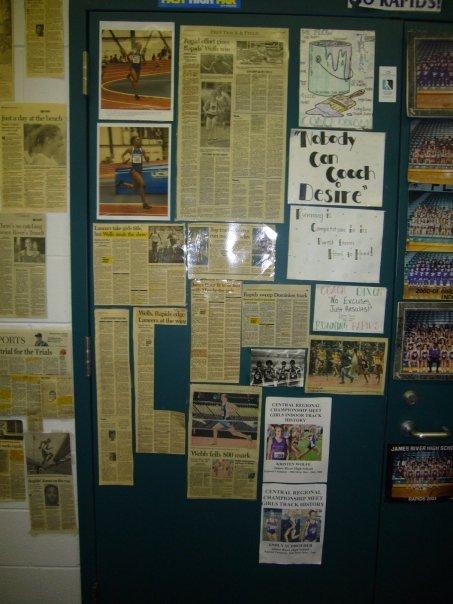 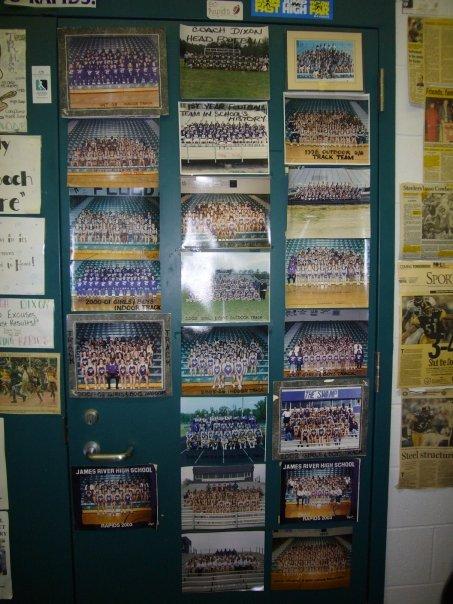 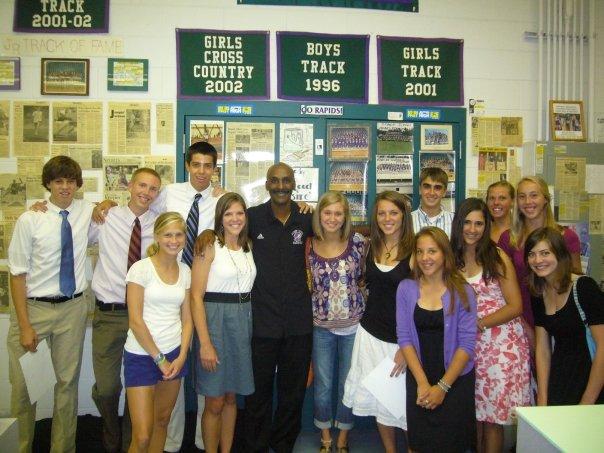 Vatel Dixon, recently retired track coach at James River High School in Midlothian, had put together quite a wall or more so track hall of fame in his classroom for all his students and athletes to see. He kept a wall in his shop classroom with articles about his runners in addition to pictures of every team he coached.  Among numerous state champions and D1 college athletes, some more famous examples include James Farrior of the Pittsburgh Steelers, who he coached in football and track at Matoaca, and Kellie Wells, current Olympic hurdler, who he coached at James River.  The pictures included are of the wall, and some members of the team standing in front of it circa 2009. 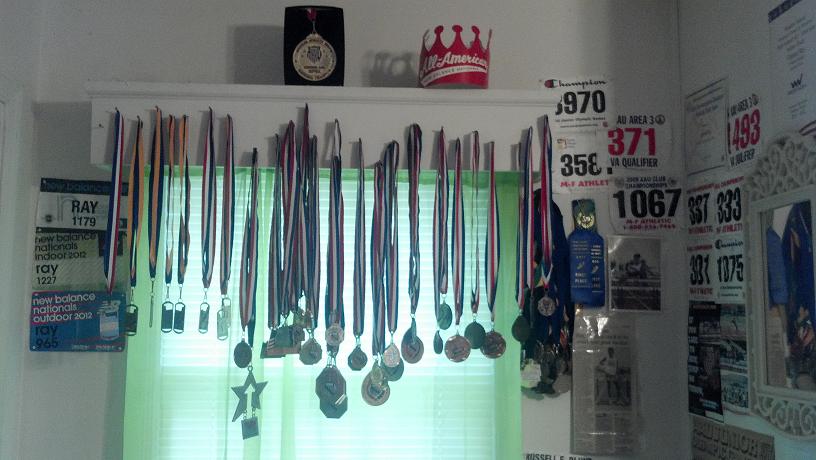 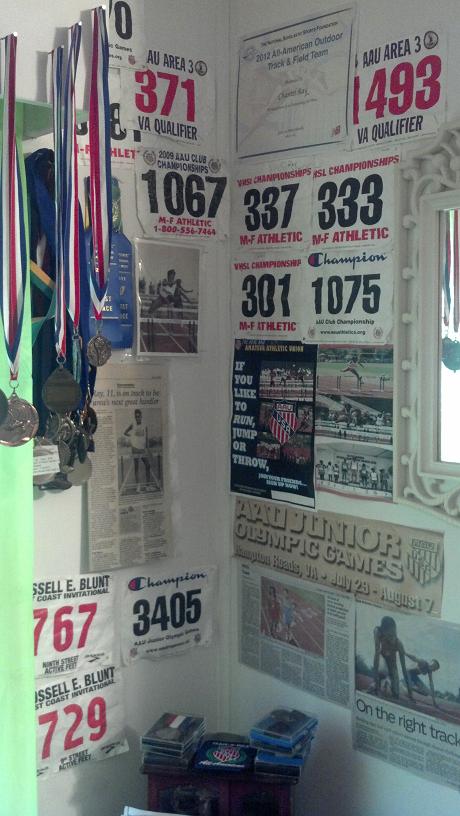 After only just completing her sophomore year at Hampton High School, hurdler Chantel Ray has already amassed quite a room full achievements. The 2012 Group AAA state outdoor champion in the 100 meter hurdles and a personal best of 13.82 which ranks her among the top 10 all-time in state history in the event, Ray has been tearing through the hurdles since her youth in the AAU and USATF summer track circuit. She is going to need clear more wall space for the next two years of success.