On Saturday with the conclusion of the Colonial District Championships at Pole Green Park in Mechanicsville, it will be the end of district week for the 2012 cross country season and as we know it for good in Virginia high school cross country. Next year, the Virginia High School League is moving to a 6 classification system which will be comprised of newly formed conferences and sectionals which will replace and remove the current qualifying system of district and regional championships being the stepping stone qualifier meets onto the state championships. While there is definitely some good and improvements being made through this new 6 class system which will more accurately place schools against other schools in a much narrow and close range in school sizes, one of the major losses and drawbacks of the new system will be the loss of the history and rivalries which was found and existed for decades within many of the districts and regions in the current 3 class system of Group AAA, AA, and A. Next year, all of the records and slate will be swept clean with a new meet history being created for the brand new conferences, sectionals, and 6 classes. There will be no chances of repeat titles for defending champions from this fall even though individuals and teams who won district, regional, and state titles will be certainly be back next fall.

This would be a great opportunity to not let this week go by without members of the Virginia high school cross country community taking the time to share through article comments and forum posts to reminisce and remember some of their fondest district championship memories in cross country as an athlete, coach, or spectator. Enjoy my own below! 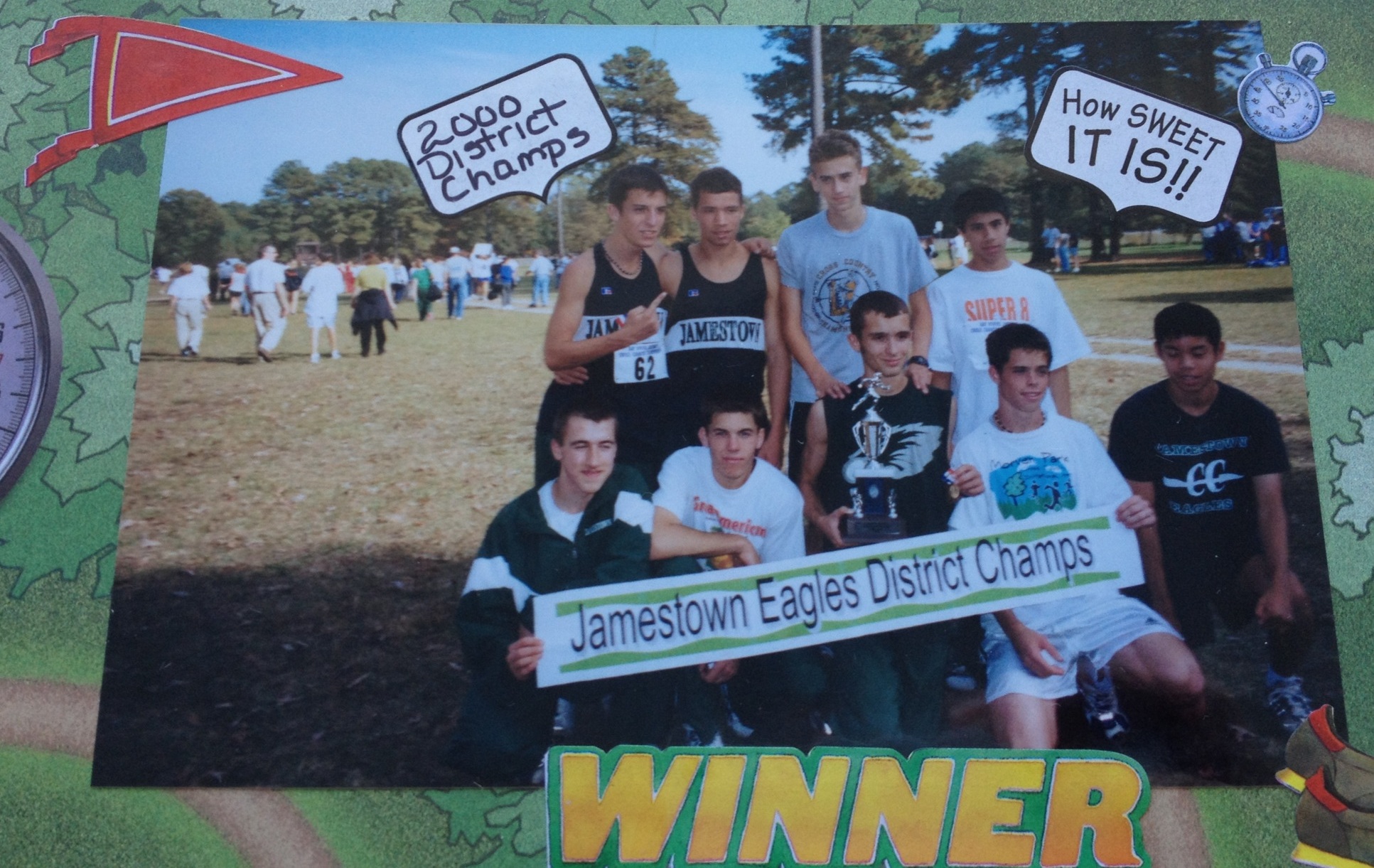 My Favorite District XC Championship Memory: I did not get a chance to run in the varsity race as freshmen at Jamestown High School when we were runners-up to Lafayette High School (#8 runner alternate that raced the next week at the Region I Championships), but got the opportunity the next three Octobers to race and be a  contributing member on three district title cross country teams at both Jamestown (2000, 2001) and Midlothian (2002). As a sophomore at Jamestown in my first district cross country championship race, I had a breakthrough PR race at the time in the Bay Rivers District Championships to be the #2 runner on Jamestown behind Bryce Ruiz. Bryce and his district rival Allen Carr of York were well out in front of the rest of the field, but I found myself among the next chase pack and shortly after the mile mark, I realized that I had a shot to get third in the district behind two of the best runners in Group AAA at the time. The chase pack ended up widdling down by the final mile to include only myself and Lafayette's top two runners Jimmy Kohlman and Preston Wall...

To set the background for this significance of this race, Lafayette was our archrivals and there was no love lost between the two teams. In the early days of message boards on sites like MileStat.com and DyeStat.com, coaches did not have as firm of a grip on what their athletes posted, so trash talk was pretty rampant on both sides. I remember that we played tackle football after one cross country season at William & Mary and it got pretty rough and dirty during the game. Cheap shots were allowed. One kid broke his arm while playing. The two teams both had a bunch of more stereotypical competitive jock types who came from other sports and were not your typical play-nice runner types you find on a lot of cross country teams today. We thought they were a pretty cocky, but talented group who maybe relied on their talent too much, so we made a point of emphasis to out working them over that summer training to try and dethrone them as district champions in the coming fall. They hated us and we hated them. Hate was a great motivational tool in this instance and got that extra gear or push out of us during races. I was a great testament to that work we put over the summer to catch up and eventually over run Lafayette as I went from being just outside of the top 7 as a freshmen to being the team's #2 or #3 runner in the fall.

Back to the race, as we popped out of the last woods trail loop at Newport News Park, it is about a quarter mile or maybe even less to the finish line. At that point, we still were all together and all were hauling. As made the final turn, it was two versus one and they had started to pull a stride or two ahead of me and it looked like their superior track speed was coming into play for the final 150-200 meters. However, I made a counter myself and was pulling up on them again and they tried to respond. It was a true testament of how much we didn't want to lose to each other as we looked over at each other and weren't willing to give one inch. I surprised myself by matching those guys in their kick. I saw the clock read 16:20s as we neared the finish. Not only was I going to scalp two big heads, but I was going to make a huge time drop in my 5K PR. When we crossed the line, it felt like and still feel like to this day that I got at least Preston Wall if not a dead heat three way tie between us when we came across the finish line, but as an inexperienced underclasssmen I learned a valuable lesson in that race to always run through into the chute and not let up after crossing the finish line. There was not many people to there at the finish to judge or make a call on our finish order, so basically the first person who got into the narrow portion of the chute was going to be how they determined our finish order.

I was very pleased and more so estatic with my time clocking a 16:30 as a sophomore and finishing fifth in the district from someone who was running over 18 minutes and not good enough to run at the district meet a freshmen  but still upset that I didn't get Lafayette's top two runners. Nonetheless, my teammates bailed me out as we ended up putting three more runners ahead of Lafayette's #3 runner to take back the district title and win decisively 35-60 to set the tone for the rest of the championship season as we were an eventual state runner-up squad by single digits to a heavily favored Western Albemarle team. That sophomore year district cross country race in 2000 was a very significant moment in my high school running career because it gave me the confidence and belief in myself as a "championship season" racer. Follow up solid and strong races in championship season reinforced that self-confidence that I would be able to turn the switch on and take it to another level when the races mattered the most. Of the three district team titles I got to experience in high school cross country, this one meant the most because we had a big rival to overcome and dethrone and also being the first title, it always seems to mean more while the last two district championship teams that I was on were more focused on winning regional and state titles.

SHARE YOUR OWN DISTRICT XC CHAMPIONSHIP MEMORY BY COMMENTING ON THIS ARTICLE OR IN THE FORUM!