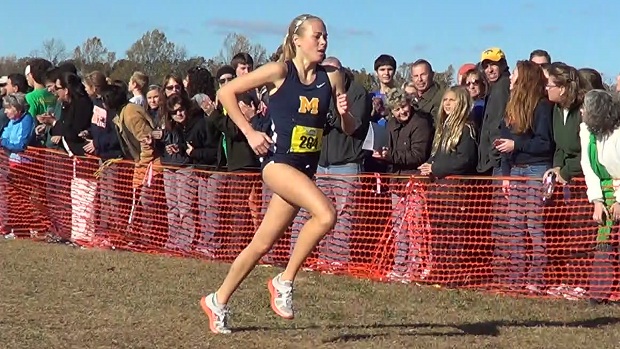 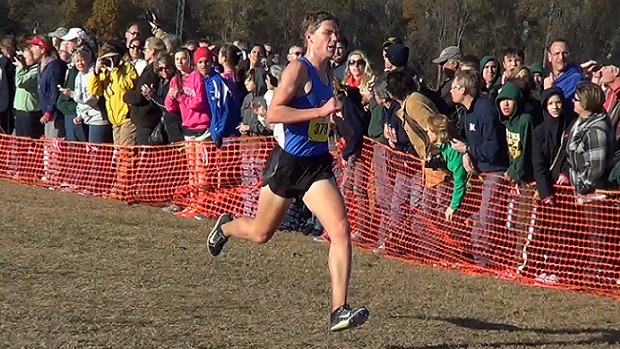 Meet Summary: Kara Dickerson apparently does not need too many races to shake off any rust. After last year missing much of the cross country season due to a stress fracture, Dickerson came back to help her Midlothian squad to state team title with a sixth place state meet finish. This year, Dickerson had the early stages of a stress fracture with a stress reaction to start the season and caused her to sit out of all races until the Manhattan Invitational in mid October when she made her 2012 cross country season debut with a 14:40 2.5 mile performance to finish 5th in the ultra competitive Eastern States Championship race at Manhattan. Dickerson skipped her district meet though to raise concerns that she may be injured again. The uncertain status of Dickerson made her a mystery to her competition in the Central Region Championships as well as the Maggie Walker team vying to challenge Midlothian for a regional team title.

Dickerson was very present and racing at the starting line for Saturday's final Central Region Cross Country Championships. Not too long into the race, it was clear that Dickerson and Maggie Walker's Rachel Galton were in a class of their own from the rest of the field as they pulled away from the field after the first mile with only Mills Godwin junior Katharine Benfer able to stay in striking distance. As the top two Central Region ranked runners and both top 6 finishers in last year's state cross country meet returned from the woods loop, Dickerson began to make her move to gradually pull away from Galton for the final 1000 meters of the course en route to a 18:06 victory. Dickerson's winning time beat her previous personal best 5K of 18:08 from the 2011 Nike Cross Southeast Regional.

The Midlothian girls have struggled this season missing Dickerson as well as the Johnston sisters, Kari and Marie, for much of the season. The return of Dickerson and the best races this season by the Johnston sisters have the Midlothian girls now looking as team who should be in serious contention for a state podium top 3 finish next week at Great Meadow. The Johnston sisters in the junior Kari (7th, 19:17) and senior Marie (8th, 19:19) moved up well in the final mile to garner top 10 finishes. Rounding out and sealing another, but the final Central Region cross country team championship for the Midlo girls was two newcomers to their varsity lineup this fall in freshmen Madison Carpenter (18th, 19:51) and senior Kali Striker (19th, 19:52). In their sum total, Midlothian added up a low winning team score of 45 points and averaged an impressive 19:17 team average on the challenging Pole Green Park 5K course.

Maggie Walker girls have had to settle for regional runner-up quite a few times over the past 10 years with a program like Midlothian in their region having won many state titles during that time. Next year, Maggie Walker will likely be the dominant time in their sectional and classification as they move to the 2A classification in the new 6 class system according to their significantly lower enrollment numbers in relation to their current Central Region and Group AAA competition. Despite just missing out on winning her first regional title, Galton had a strong run up front for the Maggie Walker girls clocking a 5K personal best of 18:14. Last fall, Galton went from fourth place in the regional meet to fourth place in the state meet. Junior teammate Daisy Banta joined Galton on the All-Region team as she was able to comeback this season from a hip stress fracture during the summer to place 13th at the Central Region Meet in 19:36. Next finishers for Coach Jim Holdren's squad were in the 20s for places between freshmen Emma Call (9th, 19:53), Jessica Lull (27th, 20:08), and and freshmen Willa King (29th, 20:10) as Maggie Walker was a distant second to Midlothian with 80 points, but comfortably ahead of the third place squad Cosby (128 pts) and fourth place squad Atlee (141 pts).

The Cosby girls were going to have a much tougher road to return to the state cross country meet as a team just starting this season with the graduation of one of Virginia's all-time great distance runners in Megan Moye, but the road got even tougher in the past week losing their top runner of this season in Dominion District runner-up Gillian Saul. Despite the loss of their top runner and likely top 15 All-Region performer in Saul, the remaining top 7 for Cosby was able to step up and secure their tickets to Great Meadow. Kate Birnbaum was the season's #1 runner earlier in the season before the sophomore Saul emerged, but returned to that role at the regional meet with a strong individual run for 10th place in 19:21. Over 40 seconds passed before the next Cosby runner came in, but after Lindsey Blum's 26th place effort of 20:04, the next remaining scorers for Cosby came in much shorter intervals with their entire top 7 under 21 minutes.

The Atlee girls were finally able to get over the hump and advance onto the state meet after being just on the outside looking in the past few seasons with talented young pack of runners. Atlee sophomore Chloe Bavin really stepped up in the front runner role which the team had somewhat been lacking despite their success in pack running. Bavin dropped 38 seconds in a 10 days from her district meet performance of 19:45 at Pole Green to her regional meet performance of 19:07. Atlee matched up well with Cosby and looked to have the third spot through four runners with Bavin, Katie Gardner (33rd, 20:21), Katt Grasberger (36th, 20:29), Paige Harrar (42nd, 20:38), and Scarlett Bavin (43rd, 20:40). However, Cosby then put all seven of their varsity runners ahead of Atlee's fifth finisher with Sadie Sandifer (30th, 20:10), Cary Reynolds (3th, 20:26), Amanda Steinman (44th, 20:43), Kelly Ward (46th, 20:46), and Elena Wirz (47th, 20:52).

Too bad there will not be a Central Region Championships next fall or Mills Godwin junior Katharine Benfer would definitely be an early favorite following her 18:19 third place performance at Pole Green on Saturday. A 44 second improvement for Benfer from last year's regional race, which she ended up placing 28th at the state meet. Benfer should project next week to place and compete for a top 15 All-State spot. Other top individual qualifiers for the region were Capital District champion Katie Sperry (4th, 18:48) of Glen Allen and Nichelle Scott (5th, 19:05) of L.C. Bird. Both juniors, Scott is one of the state's top returning half milers, while Sperry has been the ground breaker and first state qualifier for fairly new Glen Allen High School the past two years.

Atlee junior Nathaniel Hall became a two-time Central Region boys' cross country individual champion on Saturday. He will unfortunately not be able to win a historic third straight Central Region title next fall when the regionals dissolve at the end of the school year. Hall's second title had the potential to have the similar last second finish line dramatics with himself and Douglas Freeman's Ronnie Calkins as the two appeared together in the lead when they popped out of the woods loop 4000 meters into the race. Calkins set an aggressive pace for the championship boys' race with a first mile in the 4:30s which spread out the field. The fast early pace though appeared to catch up with Calkins in the final mile as Hall was able to breakaway from his regional rival and Calkins ended up dropping back to finish in 7th place with a time of 16:14. Meanwhile, Hall finished strong with a time of 15:52 for the victory.

Finishing even stronger than Hall in that final 1000 meters, but without enough real estate to track down Hall was Midlothian senior Sean Willard (2nd, 15:54) who had arguably his best high school cross country race after a very promising start to high school as a indoor nationals freshmen mile champion. Willard made a great comeback from a scary district race for him after collapsing and not finishing in a meet record attempt at the Dominion District Meet (went through two miles in 9:40s). Willard has never been All-State in cross country or track, but if he races like he did at the regional meet and only two seconds behind a runner in Hall who has a goal of finishing in the top 3 at the state meet, Willard may earn his first All-State individual medal next week.

Willard also answered the call for something that the Midlothian boys have been lacking the past two cross country seasons since the graduation of current Virginia Tech runners Brayden Burleigh and Darren Barlow in a steady and true front runner. Willard's race helped propel the Midlothian boys to a convincingly regional title with a team score of 43 points and team average of 16:14. Midlothian's entire top 5 finished among the top 15 for All-Region recognition with Willard, sophomore Collin Hahn (5th, 16:07), junior Tommy Mulroy (8th, 16:15), freshmen Randy Hahn (9th, 16:24), and sophomore Evan Benjamin (15th, 16:32). The underclassmen runners for Midlothian really stepped up at the regional meet to make up for a subpar day from Dominion District champion teammate Andrew Gorsuch (28th, 16:53). With a better race from Gorsuch at the state meet and duplicate regional performances for the rest of the team, Midlothian's late season surge might make them the only team in Group AAA with a remote shot at challenging the nationally ranked and heavily favored Chantilly boys.

At one point of the season, the Maggie Walker boys could have been considered only the third best team in their district, but find themselves after Saturday's regional as the second best team in the Central Region Meet. The Green Dragons had three individuals run well up in the chase pack to break into the top 15 with John Ziegler (6th, 16:12), Alex Fleckenstein (11th, 16:22), and Matthew Pickering (12th, 16:23). There was a considerably gap between the fourth and fifth place team, so there was not as much nerves in the wait to see who the four teams were going to the state meet, but rather the pecking order between the three teams at Midlothian. Maggie Walker with 89 points, Atlee with 99 points, and Douglas Freeman with 101 points are moving onto the state meet with the regional champs from Midlo.

The Atlee boys only had one All-Region finisher in the individual winner Hall, but their next three runners were all just outside of the top 15 and within the top 25 in Griffin Carmichael (16th, 16:33), Tre Fields (19th, 16;43), and Bizz Alidost (22nd, 16:46). Carmichael might have thought that he just missed out on racing at the state meet when he was unable to edge out Midlothian's Evan Benjamin for the 15th and final individual state qualifying spot, but his individual race helped his Atlee squad qualify for state competition for the first time in quite a few years. Lee-Davis did not qualify as a team, but was impressively represented with two of the top four finishers between a pair of juniors in Paul Adam (3rd, 15:59) and Grayson Morgan (4th, 16:07).