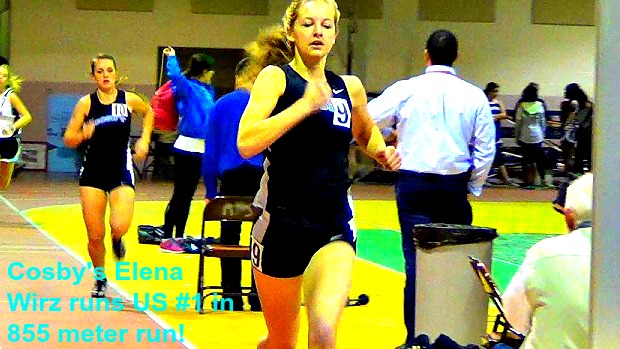 MileStat.com is on-site both days providing coverage of the 54th annual East Coast Invitational at the Arthur Ashe Center in Richmond on January 15th & 16th.

The East Coast Invitational in its glory days would produce its share of national leading performances. Well the rich tradition of the meet continued on Tuesday with a national leading performance, but not through conventional means. In the fast section of the girls 1000 meter run, there was an honest official's mistake in counting the laps of the 1000 (roughly 6 and 9/10 laps) and the bell lap was rung a lap too early and the runners finished and were timed a lap too early at 855 meters. Cosby's Elena Wirz officially won the race in a time of 2:39.43 at a very unofficial indoor distance of 855 meters, which would jokingly put her as the national leader in the odd distance event. If she had kept the pace for another lap (145 meters), she would have posted an impressive 1000 meter time in the Ashe Center of 3:06.47.

The Cosby girls had a dominant evening at the Ashe Center led by De'Nisha Smith, who won three individual events total between the long jump (17'5.75"), 55 meter hurdles (8.87), and 300 meter dash (43.37). In the 500 meter dash, Cosby team time trialed the fast section with Alexandria Moseley (1:20.71), Molly Novak (1:22.01), and Gina D'Orazio (1:23.22) sweeping the top three places for the Lady Titans. Moseley's time was particular impressive as not too many girls have come close to running under 1:20 inside the Ashe Center's spikeless track surface. Moseley had the best mark in the triple jump with a field best leap of 36'4". D'Orazio and Novak finished second and third respectively in the high jump earlier, which was won by Atlee's Carly Feyeraband in a near personal best clearance for her at 5'3".

Junior distance runners Kate Birnbaum of Cosby and Katie Sperry of Glen Allen dueled it out in the 1600 meters for the first 1200 meters of the race before Sperry really opened up distance in the final 400 meters to claim victory by 9 seconds in a 5:28.44 effort, while Birnbaum trailed in for second place at 5:37.11. Birnbaum's teammate Lindsey Blum was the 3200 meter winner as she led wire to wire over Atlee's Scarlett Bavin (2nd, 12:24.49) with a winning time of 12:12.68.

Dinwiddie junior Brittany Person blazed through the fast section of the 55 meter dash with her 7.44 clocking. With spikes on a faster running surface, Person could potentially pop a much quicker time in the event later this indoor season track. 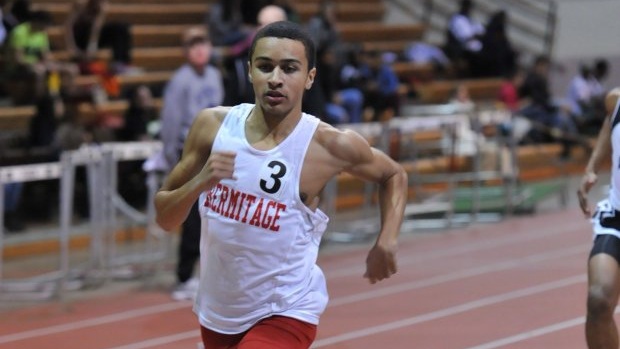 Hermitage sophomore Devin Barnes had an impressive double in the 500 and 300 meter dash at the Ashe Center on Wednesday as he won the 500 meter dash by two seconds with a 1:10.05 performance, while taking the 300 meter dash from a slower section in a 39.80 clocking. Barnes definitely excels in the long sprint and mid-distance races as he just broke 2:40 last weekend in the 1000 meter run, while posting a time of 1:08 earlier in the season in the 500 in a polar bear meet.

It was a great duel in the boys' pole vault between Highland Springs senior Kyimon Hockaday and Maggie Walker senior Brennan Kunka both clearing 12'6", while earlier misses forced Kunka to concede victory to Hockaday. The two vaulters will definitely be in contention at the Central Region Meet.

Atlee sophomore Austin Cannon uncorked a personal best throw of 52'2" in the shot put to win the event by a large margin of 5 and a half feet. Cannon is now ranked #5 in Virginia with his performance at the East Coast Invitational.

Glen Allen swept the straightaway races with junior Davon Guerrier as the winner in the 55 meter hurdles (8.22) and another junior in Oliver Smith besting the field in the 55 meter dash (6.79).

Varina's Darrick Thornhill is certainly his team's top track athlete this season and the junior distance runner was able to pull away from Prince George's Joseph Alexander Smith (2nd, 4:44.68) to take first place in the 1600 meter run with a time of 4:40.97.