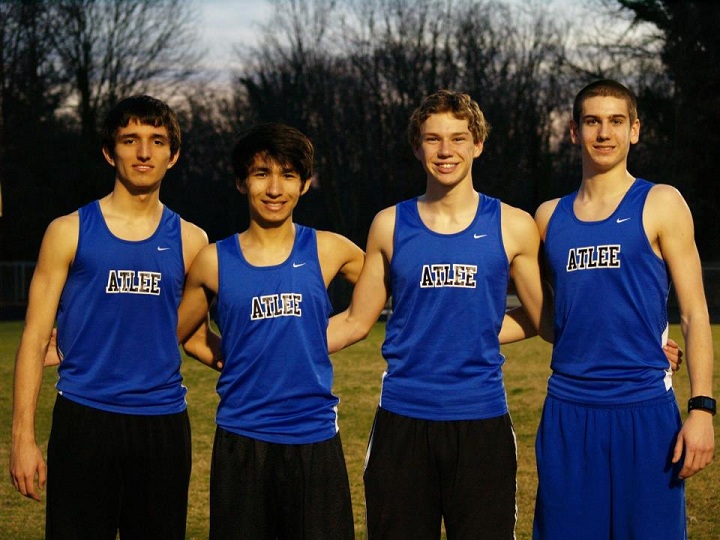 Unseasonably warm weather conditions on Tuesday this week presented perfect opportunity for a handful of Capital and Colonial District schools to produce fast times outdoors at Douglas Freeman High School in Richmond. The Atlee boys 4x800 meter relay made it clear that the evening would be filled with fast times as they opened the meet with a state leading time of 7:54.60, which would rank #4 on the US national indoor list if the race was actually held indoors. One of Atlee's relay legs in Nathaniel Hall came back later to win the 1000 meter run in a personal best and state qualifying time of 2:35.23 with Hermitage sophomore Devin Barnes finishing just behind him in second place at 2:35.82. Their fastest leg in Griffin Carmichael later won the 500 meter dash in 1:07.64.

Highland Springs boys and girls sprinters took advantage of the ideal weather conditions outdoors to roll out swift 4x200 meter relay times which will seed them well in the fast sections for the state indoor championships at Boo Williams. The Highland Springs girls dropped significant time off their season best with a 1:44.98 clocking to win the event by over 4 seconds, while the Highland Springs boys joined US leaders Forest Park as the only other Virginia squad under 1:30 this season with their 1:29.29 performance. In the 300 meter dash later, Highland Springs sophomore teammates Marcus Taylor (35.43) and Dallas Carter (35.51) went 1-2 in the race with personal best times.

Deep Run's Grayson Reid had his best race since coming back from a stress fractuce injury in cross country with a 3200 meter victory over defending Central Region 3200 indoor and outdoor champion Ronnie Calkins (9:37.45) with a personal best race of 9:32.85 to easily achieve the state automatic qualifier. Reid was looking strong earlier in the cross country season right before his injury when he won the William & Mary Invitational, but sat out the rest of the season's races until trying to give it a go at the regional meet with very limited running under his belt.

Featuring one of the nation's fastest currently at 500 meters in Mackenzie Kerr, the Douglas Freeman girls threatened to chase after a time of 4 minutes flat in the 4x400 meter relay, but finished with a season best time of 4:03.95 which inserts them among the top 10 fastest in the state of Virginia.