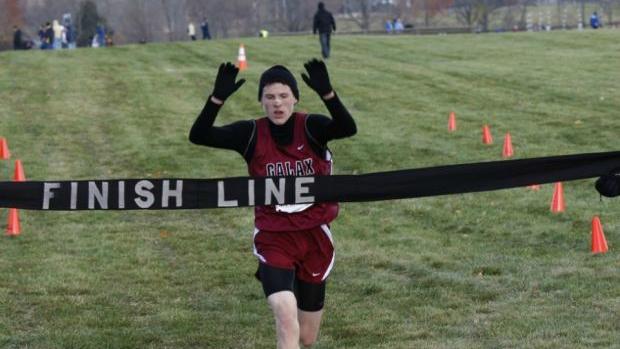 This fall was not all about Andrew Hunter and company on Friday. In the smallest classification in the VHSL we had one of the biggest team competitions in recent history with the team title being decided by just four points. Ultimately taking home the team title and with the individual champion was Galax from SW Virginia with a total of 63 points. In a very close second was Auburn also from SW Virginia with a close 67 points.

The individual champion, who defended his title, was Galax's Cliff Conley who finished in an impressive 16:16 to take the title. Finishing third and fourth (second and third for scoring teams) though were a pair of Auburn runners, Trevor Dominy and Jared Downing, who came through in the clutch for crucial points.

The great part of this title race though was how it was not only an individual effort but also a team effort as well. Auburn's top four were all inside the top 13 while Galax had their four inside the top 18 but this race came down to the fifth runner when Galax's Adam Jordan finished just 8 seconds away from not winning his team the title.

Looking deeper into how close this race was, Auburn won 11 duals in the competition while Galax only won 10. The one different between the two was against each other. Auburn also had a faster average by 2 full seconds. Galax though got the most important stat and that was fewest points and thanks to that performance were team champions.