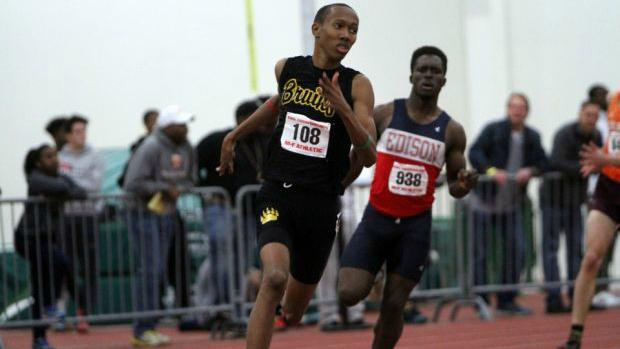 For a good portion of the late 1990's and 2000's, winning state titles became a commonplace event for Bethel, led by head coach Eddie Williams. In all, the Bruins accumulated 12 AAA championships under the tutelage of Williams, whose prized pupils included 2012 Olympic gold medalist Francena McCorory and 2008 indoor national high school 400-meter champion Ja-Vell Bullard.
While winning one championship is a grand accomplishment for any coach, 12 is worthy of instant Hall of Fame status at any level. Yet, as the zeroes segued into the 2010's, teams such as Lake Braddock and Western Branch, led by Claude Toukene, joined their Bruin brethren as double-digit state winners.
While Bethel has remained prominent within the state ranks, it was still with a careful eye that many in attendance at Boo Williams this weekend watched as the boys team chased the 5A state crown -- one which would be the Bruins first since the girls indoor team won the AAA title in 2009.
Speaking on Friday afternoon, senior thrower Brandon Slade summed up his team's mindset well.
"It's common for Coach Williams, but this would be the first one for a lot of us," said Slade, who got his team off to a great start by winning the shot put with a throw of 51-0.50.
For the thrower, earning his first state individual title was a watershed moment, and the culmination of four years of hard work between him and Bruin throwing coach Joe Strangis.
"It's good when you put it all together in one throw like Brandon did today," quipped Strangis.
Slade recalled the excitement involved with joining the Bethel track team during his freshman year.
"I remember that a LOT of people came out."
But, according to Slade, the glamour of being part of a successful team faded quickly.
"We lost a lot of people real fast. Most of them just weren't willing, or didn't want to put in the work."
Still, a few diehards stuck it out -- athletes, such as Joshua Hagins and Isaiah Norris, who would be needed to bring the team to the victory stand.
The Bruins entered Day 2 in sixth place with 10 points, all earned by Slade's victory. With no entries in the long jump, the Bruins had to wait for the track events to begin to get their day going.
Isaiah Norris started the festivities off right, taking the 55-meter hurdle championship in 7.60, which immediately doubled Bethel's point total to 20, and put the team into a tie for second, seven points behind Lee-Davis.
Norris and Hagins were the Bruin entries in the next event, the 55. And the pair placed fourth and eighth to notch six key points. Since Lee-Davis had no final qualifiers, the Bruins dropped into third, but nudged within two points of the team lead, now held by Hickory.
The Bruins took control after the next event, the 4x200, as Carlos Young, Hagins, and Norris gained the lead, before handing off to Byron Carson, who held off a charge from Hampton's Jovonn Quillen, to give the team a 1:30.67 victory, just .30 seconds ahead of the Crabbers. More importantly, the ten points vaulted Bethel into the lead.
The Bruins boosted the lead to 18, with thanks to a new member of the team, freshman Edward Richardson III, who won the 500 (1:05.72) by a second over Edison's Moses Kamara. Junior Ilkeem Ellis took eighth (1:07.76) to tack another digit to the Bethel haul. The Bruins sealed the deal with five points from Carlos Young II (4th -- 35.80) in the 300.
But, just to post an exclamation point on their win, the Bruin quartet of Hagins, Ellis, Matt Pittman and Richardson overcame a hard charging Crabber squad to claim the 4x400 relay title in 3:24.34, securing Coach Williams 13th state title.