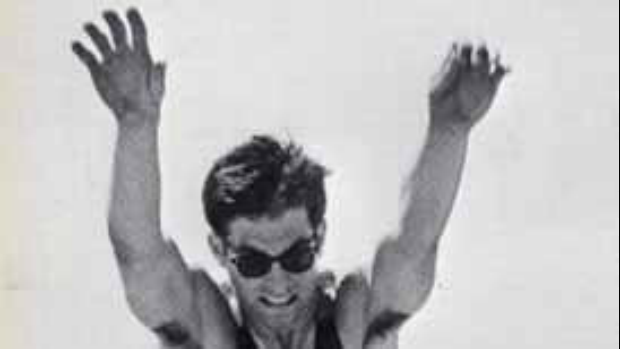 Many track fans at Boo Williams may not have realized that history was in their midst on Friday afternoon.
And that's exactly the way Doug Dickinson would prefer it to be.
Dickinson, a 1969 graduate of the former Newport News High School, is arguably the single most decorated athlete in state prep track history. As part of the Typhoon teams that won an unprecedented 14 state championships in the 1960's alone, Dickinson was the catalyst of a team that eventually compiled a 313-4-1 overall dual meet record under legendary coaches Julie Conn, and later Charlie Nuttycombe. Dickinson won 20 individual gold medals between indoor and outdoor state meets.
In the 1969 outdoor state meet alone, Dickinson won the triple jump (49-6.5), long jump (23 feet), 60-yard low and high hurdles, one of two times that he won four individual events.
He is humble to a fault.
"I'm past history," said Dickinson.
In spite of his reluctance to talk about himself, coaches and athletes stopped by to say hello to Dickinson, who sported a long gray beard and NNHS Typhoon hat.
However, it was stories about others that offered a history lesson, one, which current athletes could learn from. For example, the Bumblebee uniform, currently re-introduced by the Menchville team. According to www.nnhs65.com/TRACK-History.html, a page started by current outdoor state meet director, and Typhoon alum Al Dorner ('66), it was no accident that the blue and gold "bumble bee" track uniforms resembled UVA blue and orange.
There was another reason for going with the bumble bee.
"Coach Conn wanted to have an advantage when a race was decided by a photo finish. He wanted something that would stand out, and the bumble bee was easier to notice in a picture."
Conn would go to any length to gain a psychological advantage. Dickinson recalled his high jump career.
"I never trained for the high jump. But, I could clear 6'2," as long as I only had to jump once. Sometimes, I'd do as many as seven events in a meet. So, Coach Conn would enter me in the high jump. The official would continue to ask him when I was going to enter the competition. Finally, when the bar got to 6'2", Conn would have me come in. I'd clear the bar and be finished."
Conn's tactics transcended to the next generation. When Dorner coached at Denbigh High, he took some of his mentor's maneuvers to heart.
"Sometimes, when the team had a meet at Todd Stadium, we'd get off the bus, and I'd tell the guys to go jog down toward the restroom area and stay there. So, when the other team got off their bus, they'd look around and ask where Denbigh was. So, I'd tell them, "They should be here any minute. They're running to the stadium. Now, that's a seven and a half mile run. Those guys would kind of look at each other, and it made them think."
Dickinson, who had not attended a state meet in 15 years, was impressed with some of Friday's sights and sounds. Instinctively, he noticed the form of one hurdler who breezed to a semifinal victory.
"You can tell by the way he ran high on the first hurdle. There's something special," said Dickerson, who coached at Christopher Newport College and Menchville High after his competitive career. At Menchville, he succeeded Steve Lewis, who recently passed away, but went from Menchville to coach at the Division I level for Pitt and Hampton.
The hurdler turned out to be Grant Holloway, who was introduced to Dickinson shortly after his heat.
Asked if there was one special recollection from his past at Newport News High, Dickinson was quick to respond.
"In 1934, my father was captain of the team that won Coach Conn's first state title. Then, in 1969, I was the captain of the team that won Conn's last state title. We kept it in the family."