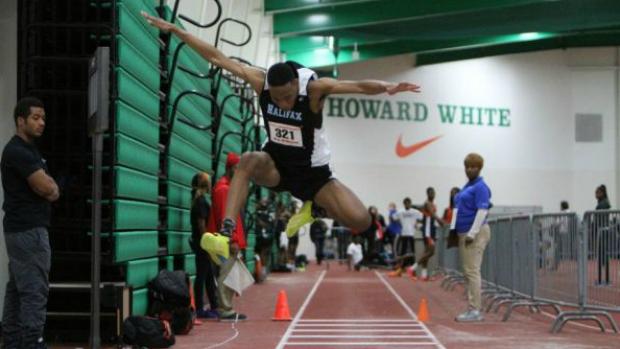 A look at the 5A boys' standings after Day 1 could have produced quite a surprise for the knowledgeable track fan. At the end of Friday's competition, sitting in fourth place with 11 points was J.E.B. Stuart of Falls Church, while Halifax County was in sixth, a point behind.
To understand the significance of the moment, one needs to gain a better understanding of the demographics and history behind both schools.
For years, J.E.B. Stuart has been a member of the National District, and competed against much better-known athletic programs such as Edison, Mount Vernon and Washington-Lee. However, for the past 15 years, many Stuart teams have placed closer to the cellar in the district standings than the top.
This was not always the case; in fact, there are several notables among the Raiders' athletic alumni. Penny Moore was a USA Today All-American as a basketball player and later a WNBA player. Moore led Stuart to its lone state title in girls' basketball under Coach Ron Wilson in 1987. Mike Bragg was a punter for the Redskins in the 1970's, while Charlie Garner rushed for over 8,000 yards as an NFL running back.
However, it got so bad at Stuart that one track coach, upon being hired to coach the boys' team in the early 2000's, was told by a fellow coach and Stuart teacher, "you just inherited the worst track team in the state." Nevertheless, during the 2002-2003 year, the football team went 0-10 for the second year in a row, lacrosse sported a 0-11 record, boys' basketball was 1-19, and baseball suffered through a 2-18 campaign, showing that the problem was widespread throughout the department.
While some programs have made improvement in this decade, it was still surprising to see Stuart in competitive position after the first day of events. The better news is that all of their scorers have at least one year of eligibility left.
Michael Klusner was the star for the Raiders on Friday. Klusner, a junior, fell short of his best throw of 51 feet in the shot put. However, his 48-5.5 effort was good enough to place second, earning eight points for J.E.B. Junior vaulter Mossadiq Khan added another three points with his sixth place vault of 12-6, a whopping 18 inches over his previous best of 11 feet.
In addition, on the girls' side, sophomore Maya Verna placed eighth in the high jump with a leap of 5-0.
The story is different for the Comets of Halifax County. While Stuart is located in Fairfax County (population of approximately 1.1 million), Halifax is located on the northern end (near the Huddle House and across from Wal-Mart) of South Boston, Virginia (population 8,142).
In spite of having twice the land mass of Fairfax County, there are only 36,000 residents who call Halifax County home. In spite of its small population, there are enough students at the high school to earn it a 5A classification, making it an anomaly among the schools of south-central Virginia. By comparison, Randolph Henry, the lone high school in neighboring Charlotte County, competes as a 2A.
The biggest irony comes elsewhere. In spite of being only eight miles from the North Carolina border, the Comets are a member of 5A North, and compete in their conference meet with Jefferson, Falls Church, and at least a dozen other Northern Virginia schools.
On paper, the Comets would appear to be overmatched. However, a contingent of seven athletes (one alternate) qualified for states, and one Comet, senior triple jumper Donyea Williams, won the event with a 44-10 jump.
Senior Kayla Forest, who was making her third appearance at States, likes the whole experience of traveling east to States.
"It's very competitive, and we get to see people that we would never run against otherwise. It's really fun," said Forest, adding that the closest indoor track to South Boston is Liberty University's facility, which is 60 miles away in Lynchburg.