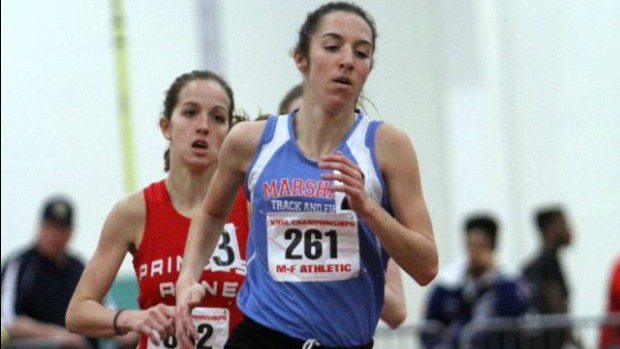 Marshall's Heather Holt continued her assault on the sub-5 minute mile while winning the 5A girls title on Saturday.
Holt, a sophomore, burned up the Boo Williams oval to clock a 5:01.74, good enough to overtake Princess Anne's Doria Martingayle by almost four seconds. It was also Holt's best time since her 5:05 at the Cassel's XBC Track Experience late last April.
Later in the day, Holt also placed third in the 1000 with a 3:03.04 effort.
At this rate, it shouldn't be long before the Stateswoman breaks the five-minute barrier.
"I'm learning as I go along," admits Holt, who was a self-proclaimed soccer player before turning her full attention to cross-country and track after her freshman year.
Not that she was a lagging runner before. As a ninth-grader, Holt also won the 5A girls indoor state 1600, with a somewhat slower time of 5:10.82. She also doubled at last year's indoor state meet with the 3200 and said that "it was not my best race." In fact, her time of 11:51 was considerably slower than the 11:14 she ran this season in a December quad meet.
So, what's the difference now that soccer is out?
"It's easier to get to practice," says Holt. Last year, I'd go straight from soccer to track practice, and because I had to do two sports, I'd go easier at track practice. Now, I have more days to keep running."
And her running regimen is solid, with distance days of 7-8 miles, while her track days usually end up with 5-6 miles of running.
Holt also speaks well of her coach, Darrell General, who for years was a staple of the D.C. area road racing circuits, winning the Marine Corps Marathon in 1995 and 1997.
"He's (General) amazing," adds Holt. "He gives us a lot of support. He can memorize everybody's time even before we know what to do. He's always available -- you can always reach him."
Being a teenager, Holt wasn't initially aware of her coach's athletic reputation. "People know him. Everywhere I go, even the grocery store, people see my Marshall track shirt and ask if he's my coach."
While her 5:01 is not quite a New Balance National elite time, Holt is happy to have qualified for "some emerging elite meets." But she adds, "spring track is coming up soon."
And with the dawn of spring comes new goals. "We trying to run a DMR (distance medley) at Penn (Relays). We went last year, but didn't do as well as hoped. But I'm glad we got the experience. Now that we've been there, we know what to expect."