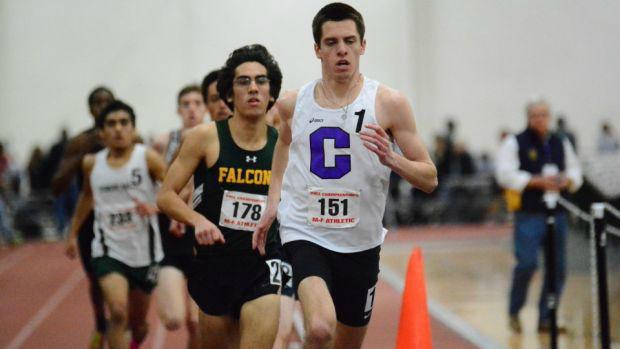 Chantilly's Brandon McGorty has been primarily driven by two goals during this indoor season. The first was to win the 6A 1600-meter title, and break the meet record. His second goal is to capture the open 800 at next week's New Balance Nationals - an achievement that he almost earned last year, placing second in 1:51.5 despite inexplicably having to run from the slow heat.

While most runners would harness their focus to these two individual goals, let it be stated that most runners are not as intense as the Charger junior. So, last month, without provocation, McGorty approached Coach Matt Gilchrist and announced a new goal.

Aside from wanting to be a good teammate, McGorty had another reason for wanting to triple.

"I decided that I wanted to test my strength. Coach thought it was a good idea, and we just went for it."

The first test came at the Concorde Conference meet.

The results were satisfactory. "It worked well," said Gilchrist.

The only "X factor" in completing the triple for States may have come from McGorty's competition in the 1600. "His best was 4:19, but he ran that at Christmas," added Gilchrist, keeping in mind that other milers, such as Cox's Jonathan Lomogda, would be stiff competition. If there were problems in the first race, it could have affected McGorty's performance later in the 1000 and 4x400.

The coach and runner mapped out a strategy. Go out hard for the early laps of the 1600 and aim to put the race away early. And McGorty stuck to script, sailing through the first 400 meters in 61.5 and the half at 2:05.

However, there was one problem. He was not completely alone yet.

"He was forced out hard early," said Gilchrist. "Lomogda ran a great race and made him work for it. We didn't expect him to hang for quite as long."

So instead of staying in gear and easing to victory, McGorty was forced to push through the next three laps. But, the end result was a first place finish, as well as a new personal best and state meet record of 4:13.46. Lomogda hung on for second in 4:17.91.

The effort exerted in the 1600 may have affected McGorty in his next race, the 1000. Although he came in with a seedtime of 2:25, McGorty maintained an even pace, hitting most of his laps in roughly 30 seconds en route to a 2:29.62 win, .71 seconds off his own meet record from the previous year.

In the process, he managed to retain enough energy to play a huge part in the Chargers' final act. McGorty ran the third leg on the 1600-meter relay, keeping the Chargers in contention before handing off to Titus Jeffries Jr., who blasted the remaining competitors, as Chantilly won with a time of 3:24.38, a full two seconds ahead of runner-up T.C. Williams.

Jeffries will join McGorty in another event this weekend, as the pair team up with a couple of 200-meter runners ("we don't know who yet") for the sprint medley. Last spring, the Chargers placed third at the Outdoor nationals, and they hope to claim the gold this year.

A national title would help Brandon to cement his own legacy among the McGorty brothers, but it is not something that he worries about.

"I try not to focus on it. It's a friendly rivalry. I just happen to have two brothers who are really good."

There's an understatement! In fact, the whole McGorty clan, all Chantilly men, excelled on the final weekend of February. Oldest brother Sean had a breakout performance, as the Stanford senior clocked an all-time Cardinal best (and #4 all-time for college - indoor or outdoor track) time of 3:53.95 in the 1600 meters, while placing second behind Washington's Izaic Yorks at the Mountain Pacific Sports Federation Championships. The #4 standard will not be official because of the awkward 307-meter track. Meanwhile, Alex, a freshman at W&M, ran the leadoff 1200-meter leg for the Tribe's 5th place distance medley team at the prestigious IC4A championships.

Brandon might follow Sean to Stanford, but says he is keeping his options open for right now. Other suitors include Georgetown and Penn State. In all, there are seven schools, but that number will certainly grow exponentially in the coming months.

But they will have to wait. There are a couple of national championships to gun for at the Armory this weekend.