WATCH All Day 1 Races on FloTrack!

The only relay run on Friday was the 4x800; however, all four of the races provided a great ending for the first day of competition.

Lake Braddock swept the 6A races, but had to fend off stiff competition both times.

On the girls' side, Lake Braddock had two serious contenders in Western Branch and South Lakes. Shannon Browning, Madeline McAvoy, Madison Tippet and Samantha Schwers took home the gold, but not before holding off both Western Branch, and then, a final charge from the Seahawks' distance ace Olivia Beckner, who made up ground and passed Western Branch on the straightaway, but ran out of room to get to the Bruins. 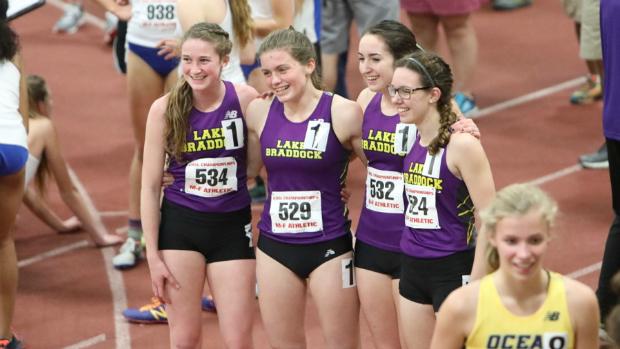 In the boys race, it was the Robinson Rams, with Charles Hogeboom, Nick Toenshoff, Gavin Camby and Devin Rohler giving the Bruins all they could handle for 2600 meters. But, Tyler Lawson, Edward Cerne and Marcus Wilson kept a share of the lead before junior Andrew Delvecchio pulled away for an 8:03.32 winning time.

Rohler had put the Rams into contention with his second leg split of 1:58.7. Said Ram coach Mike Kiernan, "our third leg ran about a 2:03, and kept us in the race. He's a scrappy kid.

In 5A girls, Marshall's first three runners, Ava D. Bir, Layan Qasem, and Jenna Robbins gave the Lady Statesmen a formidable lead, before Heather Holt grabbed the baton and put the race away with a six second margin of victory over Albemarle.

Yet, the most impressive, and fastest run of the evening came from the Deep Run quartet of Zachary Levet, Jake Schindel, Matthias Cannon and Basir Mosavel-Lo, who not only held off a spirited charge by Mountain View, but also dipped under eight minutes for the first time this season, quite a relief after posting a best of 8:00.78 earlier in the season.