Leading into the state 5A/6A finals on Friday morning, MileStat webmaster Nolan Jez initiated a conversation with former Bethel coach, and now meet official, Eddie Williams about the potential outcome of the 5A boys showdown. Jez was leaning toward Lee-Davis scoring 50 points and having the capability to win, while Williams questioned how they could make it to 50.

Eventually, the conversation steered to a question about Williams' old squad. Could Bethel pull the repeat?

There was a question of numbers. Last year's titlists, who gave Williams a terrific going away present with his 13th state title, accomplished last year's feat with 12 athletes. This year, they only had five - Byron Carson, Edward Richardson III, Zaire Williams, Ilkeem Ellis and Amir Stancil. The quintet formed a veritable Fab Five, but logic dictated that a better stocked team would take home the big trophy. While neither Jez, nor Williams, would count out the hometown team, there was an agreement that the results would have to lay out perfectly, with a combination of Bethel triumphs and losses by other teams. But again, said Williams, "I'm not sure where you are getting 50 points for Lee-Davis."

As it turned out, the Confederates loaded up with points in the five field events. Alex Slinkman won the pole vault (15-0), while Chris Vincent cleared 13 feet for fourth, giving Lee-Davis 15 points. Connor Scott was third in the shot (52-11), and Dallas Jackson took fifth in the triple jump with a hop, skip and jump of 44 feet, 1.5 inches. Nichols Corbin's eighth place tie in the high jump tacked on another half point, and Lee-Davis totaled 25.5 field points, and finished Day 1 in the lead, with Atlee in second place with 20.

By comparison, Bethel finished Friday with two points and languished in 17th place. It was going to take a miraculous series of events to put the Bruins back into contention.

And that's exactly what happened on Saturday.

With just five runners, the only scenario that could even put Bethel in the top-three would have to start with the Bruins, now coached by Nanette Gaines and Joe Sturgis, winning every event they were entered in.

The first running event was the 55-meter hurdles. Carson played his part, winning the race in 7.57 seconds. More importantly, he edged out Brandon Brooks of Lee-Davis, who was second in 7.59.

However, Nicholas Corbin of L-D place fifth and added four extra points to the Feds score, meaning that Lee-Davis outscored the Bruins 12-10 and now led 37.5 to 12. Soon after, Donovan Lewis of Potomac won the 55 (6.39), bumping the Panthers into second place with 33 points. Bethel sat in tenth.

Potomac would take the team lead with its fourth place finish in the 4x200 relay as the quartet of Rawle Berbnor Jr., Zenis Mensah, Kofi Boateng and Matthew Mitchell clocked a 1:31.68. Carson, Ellis, Williams and Stancil placed fifth (1:33.20), while Lee-Davis finished in 11th (1:33.57), and earned no points. With its four points, the Bruins, now with 16, climbed into eighth place, just one behind Green Run. 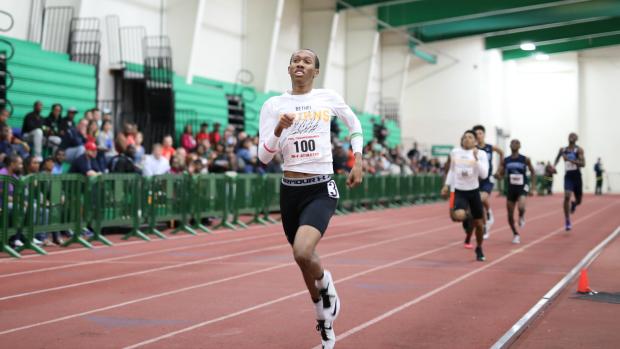 Two-thirds of the way through the meet, Bethel had just broken into the top-10 team standings. The idea of taking home a team trophy seemed bleak.

Yet it only took one event to change the entire course of events.

With two entries in the 500, and only 11 competitors in all, it looked like Bethel could score mightily with their tandem of top-seeded Richardson, and #3 Ellis. However, Lee-Davis had Jeremiah Hankerson who entered tied for the fifth seed, ironically with Potomac's Kevin Mayers.

All four runners were together in Heat 2. For the most part, the race went according to plan. Jacob Weigel of Kecoughtan provided the major surprise, finishing in second with the #9 seed and a placement in Heat #1. But, Richardson (1:04.96) and Ellis (1:06.27) finished 1-2 in the final heat to give Bethel first and third, doubling their team point total, which now leaped to 32. Hankerson placed fourth to slightly pad Lee-Davis' lead over Potomac, as Mayers finished sixth.

Most importantly, with the 16 additional points, the Bruins leapfrogged over Douglas Freeman, Highland Springs, Atlee, Mountain View and Prince George into third place. Still, Lee-Davis led with 44.5, with Potomac in second at 41.

It would take another win to close the gap, one which King Edward III would provide just an hour later.

Richardson left little doubt with his win in the 300, edging Tarik Samuel of Prince George by .49 seconds with his 34.6 time, but besting all other runners by over a second.

Most importantly, neither the Lee-Davis runner, nor two of the three entries from Potomac, cracked into the scoring column. Mayers placed fifth to vault Potomac back into the lead over the Confederates, 45-44.5. But Bethel's ten points put them squarely in third with 42. As none of the teams would have runners in the next to last event - the 3200, the championship would come down to the final event, the 4x400, an event that had all three teams facing off in the final heat.

Bethel did not have to win the 4x400 to earn the championship. However, they would have to defeat both Lee-Davis and Potomac by at least two places - three, if all of the teams finished below third place.

The Showdown, and King Edward's Kick

On paper, Bethel was seeded far ahead of the pack at #1. Yet, Lee-Davis seeded at #2, only needed to hold their spot, and beat Potomac, to win the championship. The Panthers, at #4, would need to finish higher, probably second to Bethel, to guarantee a team win.

The Bruins climbed as high as third during the first three legs, as Carson, Ellis, and Williams, now tired from their other events, tried to gain the lead. However, a drop-off on Leg #3 led to Richardson, one of the nation's top long sprinting sophomores, being given the baton in fifth, and near last place.

Richardson nudged forward, but was still out of video camera view through the first 200 meters. On the final back stretch, he strode past two runners into third, setting up one of the greatest finishes in state meet history.

Coming around the final turn, Richardson had to go wide as Hampton, and a surprising Kempsville team, occupied the first two spots. Reaching down for his last gear, almost worn to a nub after winning efforts in the 500 and 300, Richardson found the extra push to catch up to, and then overtake, both runners on the final straight. With a final burst of energy, the Bruin, with a screaming home crowd showing support, broke the tape, just two-tenths of a second ahead of Kempsville, the #6 seed, who spoiled a higher finish for Lee-Davis and Potomac with their improvement of almost four seconds. Hampton, seeded just behind Lee-Davis, finished two strides ahead of the Mechanicsville school for third, leaving the Feds in fourth, with Potomac fifth, albeit with a two second team best.

Coaches Sturgis, and then Gaines, led a crowd of Bruin supporters on to the track to mob the athletes, seeing as 80 percent of their team was in the race! The final tally was Bethel 52, Lee-Davis 49.5 and Potomac 49.