On Friday afternoon, I decided to give a short, impromptu quiz to several of the coaches and co-workers at the Boo Williams Sportsplex. It wasn't a tough test; in fact, it was only one question. To my surprise and amusement, many of the test takers failed.

"Do you know who Boo Williams is?"

Of course, the initial response was, "Sure, the guy that owns this building." However, there weren't many second and third sentences in the answer. Here's one -- "the multi-millionaire who donated the building."
One person was surprised when I mentioned that Boo Williams would probably be walking around at the meet later. Another was shocked when I said he had to leave his "9-to-5" job as an insurance agent with State Farm before coming over. 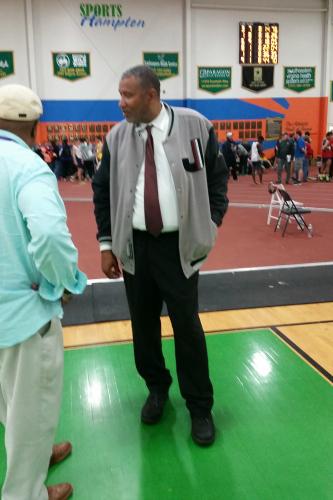 Around 5 PM, Marcellus "Boo" Williams made his entrance into the track facility. At almost six-foot-eight, he was hard to miss. Williams regularly makes an appearance at the state track meet, and many other non-championship track events. In fact, he is a regular fixture in the building that bears his name, and hosts events almost every day of the year.
However, his legend is more recognizable on the other side of the Sportsplex building, where many athletes warmed up among the numerous banners on either side of the State Farm gymnasium.
Boo Williams is a native of Hampton and attended Phoebus High. Because of his basketball prowess, a scholarship to continue playing at St. Joseph's University followed, and then a professional basketball career in Europe. Upon returning to Hampton in 1982, Williams started his work with State Farm, but was also bitten by the coaching bug.
On a $400 investment, he formed the Boo Williams Summer League. And the rest, as they say, is history. Starting with forty-six players, the league transformed into the Boo Williams Nike Invitational, and with over 200 teams and 2,500 players is known as one of the premier AAU leagues in the United States. To list his former youth players is to read a "Who's Who" of basketball players from Hampton Roads. Players such as Allen Iverson, Alonzo Mourning and Joe Smith have called Williams their coach, helping bring many AAU national titles back to Tidewater.
Along with his collaboration with Howard White of Nike, it was some of the former players whom Williams called for financial support, when his vision for a major sports facility to house the basketball tournaments came into reality. White, the Nike vice-president in charge of the Jordan brand, was a huge supporter of the project, and is the reason for the "Howard White" with a Nike swoosh in the northeast corner of the track area.
Another fact that may be unknown to many is that the "Booplex" was originally planned to be mostly a basketball-only facility. However, after realizing that a whole section of the converted warehouse was wide open, the planners went to then-Bethel High coach Eddie Williams and asked for his advice on designing a track. City leaders, realizing that a high-level track was sorely needed in the region, and that a suitable facility could attract high level meets, and boost money into the Hampton economy, made sure that a track with state-of-the-art features was built.
In all, it cost $13.5 million to complete the Boo Williams Sportsplex, which utilizes 135,000 square feet, seats 4,000 between the two sides, and holds eight basketball courts, which can conduct games simultaneously, as well as twelve volleyball courts and eight indoor hockey fields.
On Friday, Williams was told of the comment about being the multi-millionaire who donated the building. He simply laughed and responded with one word -- "No."
To view some of our Coach Williams' former players, one only needs to look for their names on the banners hanging in the State Farm gymnasium across from the track. To view the Coach, on Friday, he was the tall gentleman near the medal table with the gray and black Nike Jordan jacket.
Of course, for identification purposes, one could say that the biggest name on the building was probably also the tallest man inside of it.