Much like the amplifiers of guitarist Nigel Tufnel from the movie and band Spinal Tap (look it up!), for the past three state meets, Battlefield pole vaulter Emily Harrison had only gone up to eleven.

Starting with outdoor season of her sophomore year, Harrison has won all three-6A pole-vaulting competitions. And yes, she won each of them with a leap of exactly - eleven feet.

This season, the Bobcat senior was determined to break the impasse. She entered the 2016-17 indoor campaign with a best vault of 11-9, from last outdoor's region meet.

Right from the first meet of the season, when she cleared 12 feel at the Real Deal High School Classic at Boo Williams, Harrison has tested her boundaries. At the Ed Bowie Classic, she cleared a best of 12-3, and has gotten over twelve feet on three other occasions, including last weekend's Coast Guard 6A Northern Region meet, where she won at 12-2.

However, something wasn't quite right for Harrison on Friday morning.

"During warm-ups, I wasn't as confident as usual. I wasn't feeling well, so I had to go and sit down."

Fortunately, her feeling of discomfort was short-lived. 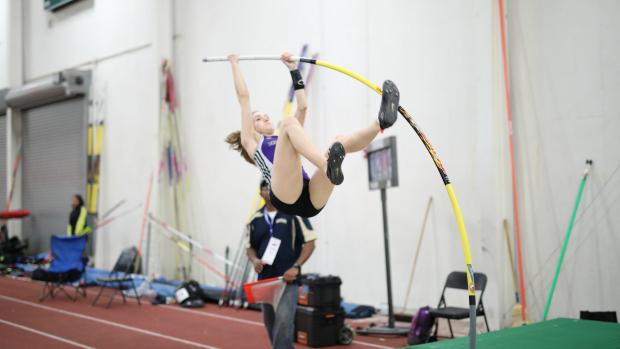 "I got in the competition at 11 feet, and once I cleared it I was fine. It just took longer to get back in the game."

Upon entrance, about "5 or 6" vaulters remained, an unusual occurrence for Harrison, who has grown accustomed to being virtually alone when we starts vaulting.

"This was definitely the closest it's ever been at the state meet," said Harrison, who proceeded to clear 11-6 on her first try, followed by 12 feet, and finally 12-4, a new personal best, and meet record.

In an ironic twist, both of the girls tied for second - Hannah Robertson of West Springfield and Taylor Jones of South County, cleared 11 feet.

Harrison will continue her career at Villanova next year where she hopes to eventually major in biology, while leaving open the possibility of a career in neuroscience.

"My vaulting coach (Kyle Bishop) told me that they had a coach I should train with. I visited the campus over the summer, and then they offered an official visit last fall. I just fell in love with the school."

Harrison aims to clear 12-6 at the New Balance Indoor Nationals in Boston (March 10-12), and looks to get over the 13-foot barrier come outdoor season.

After all, unlike the fictional Tufnel, she's tired of only going up to eleven.