We tried to preview the meet and get people hype for the races under the lights but all we had to do really was fire the starter's pistol and let them race because what they did was more exciting than we could have ever imagined. In the 2017 installment of the RVA Relays the girls once again stole the show and showed the guys why they ran last in dramatic fashion.

The night started off actually in the light with the B/C relay races. Up first were the boys. In this "B" race it was Deep Run and Western Branch most of the way but Deep Run proved too deep and took home the win in 40:06. Branch was second in 40:23 and Patriot was third in 40:40. Running at the same time was the "C" race which was ultimately won by Patriot in 42:13 just seconds ahead of Deep Run who dropped the baton and came this close to a sweep of the guys relays.

Following the guys were the girls B/C relays being run together. Winning this one were the Bruins of Western Branch in a very solid time of 47:01. Taking home the "C" race was Freedom in 51:49 and taking home the fastest split was Emily McArthur of Colgan with a very speedy 9:00 split.

Now as the sun was starting to set we saw two "Extra" boys races and one girls' race. Then we had two more open races with the middle and elementary combined race and then the coaches/open glow run. Check out all these winners right here.

Just as the sun fully set it was time for the boys "A" Championship relay race. This 5x2500m relay was built up to be a fast one and these guys did not disappoint at all. From the start it a fast one. At the first exchange it was Aaron Johnson of James River handing off first in 7:29. Next up though to receive the baton was Mountain View's Henrik Anderson who was ready to let one rip.

On that second leg Mountain View made a huge move. Thanks to Henrik's ultimate 7:02, #3 all-time split, he brought his team back from around 10th to 1st by handing off at 15:03 just ahead of Osbourn Park, Patriot, and Deep Run who all were separated by just six seconds.

Now on the third leg the race definitely started to shape up more and more. See you can get away with having a weak 4th or 5th runner at a normal XC meet but with half the distance to cover you have zero room for error at the RVA Relays. That is why this leg really was important to show who had the deep teams and the studs to seal the deal. Handing off in first from third to fourth was Deep Run in 22:41 with Mountain View, Hickory, and Ocean Lakes also handing off under 23:00.

With just a few teams now in contention out of the original 25 it was game time! The question of who wanted it most and who had the depth to take it was about to be answered. Headlining this group of athletes were Zachary Levet for leading team Deep Run and Chase Osborne of Western Branch who got the baton in 11th place. Levet went on to run the 5th fastest split of the meet (7:20) to hold onto a commanding lead for Deep Run while Chase had to do a whole lot of chasing. Chase ultimately handed the baton off after just a 7:11 carry to rank him 4th amongst all competitors and 7th all-time.

Thanks to those fast penultimate splits it was still Deep Run leading big but now Western Branch trailed in second with Ocean Lakes and Mountain View just steps behind as well.

Onto the anchor legs it was a who's who competition and of course shaping up to be a tough battle to the finish but Mathias Cannon of Deep Run was having none of that and opened in 4:40! His opening speed definitely affected the rest of the chasing teams and now it was a battle for second and third.

The Wildcats of Deep Run could not be caught and stormed down the final stretch to make it two in a row with their 37:08 winning time. Cannon's split of 7:06 ranks fifth all-time on this course. Finishing behind them was Ocean Lakes in 37:29, Western Branch in 38:03, and Maggie Walker in 38:07.

Taking home a new course record and nice backpack for his fastest split title was Brent Bailey of Ocean Lakes. His chip time registered as 6:59 and change which rounds up to an official 7:00.00. Though we can't count his time as a sub 7:00 split, it is still a new course, meet, and facility 2.5K record and more impressively on sub 14:00 minute 5K pace!

Deep Run took home the team title with a huge margin of victory thanks to going first, first, second in all three relays. 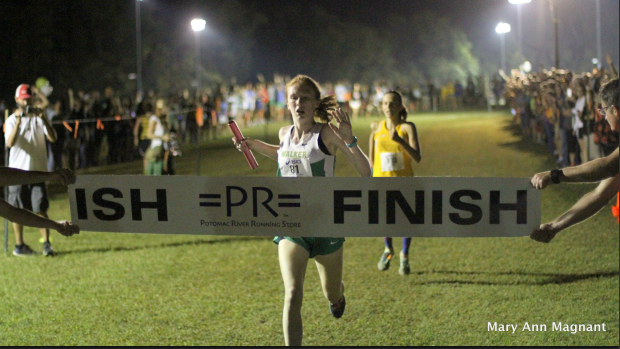 We aren't going to lie, each year the girls' race turns out to be the better and more exciting race and for the third year in a row it was a come from behind victory on the anchor leg. Ultimately sealing the deal for the relay win, fastest split, and overall team title was super sophomore Mary Caroline-Heinen of Maggie Walker with her 8:08 split for the win!

The start of the race and subsequent four legs prior were just as exciting as the finish though. It all started with the gun and some spooky fog rolling into the course. Though you could see fine near the finish line, the other 70% of course was nothing but some of the coolest and skin-crawling scary fog making for an epic race on the Pole Green course.

Starting off on the right foot was definitely Hanover led by Rachel Crytser (8:44) who handed off in first place with quite a few teams right behind. Mills Godwin, Jamestown, Midlothian, Atlee, and Western Albemarle all also handed off under 9:00 thru the first leg.

Thanks to a fast leg by Emily Winder of Western Albemarle it was now them in the lead heading into what was sure to be an epic anchor leg. At the final exchange it was Western Albemarle at 36:35 and Maggie Walker at 36:39. Atlee was still third in 36:44.

Now onto the final leg it was clear it was a two girl and team race between Clay of WA and Heinen of MW who were stride for stride with each other the entire final half of their legs all the way to the line. Taking home the title with a sick kick was Mary Caroline Heinen of Maggie Walker thanks to her 8:08 split to help cut their four second deficit to a one second victory. Their final times were 44:47 to 44:48 Maggie Walker over Western Albemarle. Of course both ladies' split ranked first and second overall and 2nd and 4th all-time.