Sometimes you put everything together into just one race, everything feels great and then the gun goes off. The rest is history. That is what happened this weekend at the VISAA State Championships when Trinity Episcopal's Donavan Goode blasted out of the blocks in the 55m dash. He powered down the track and shouted as he leaned over the line. The clock read 6.39 and he was now a state champion and meet record holder.

Coming into the race Donavan owned PR's of 6.52 and 11.00 (100m outdoors). That time ranked him 75th in the entire nation and after his race Saturday he now ranks 11th! That improvement of performance translates him to 10.6 now in the 100m dash which also puts him in a strong position to challenge the VISAA State meet record as well.

With that finish he is now qualified to compete in the Emerging Elite division at the New Balance Indoor National Championships in New York. 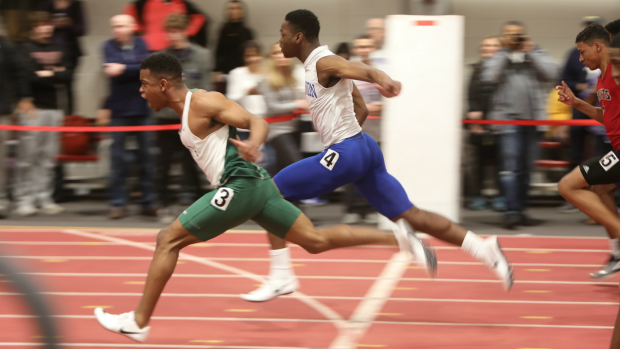