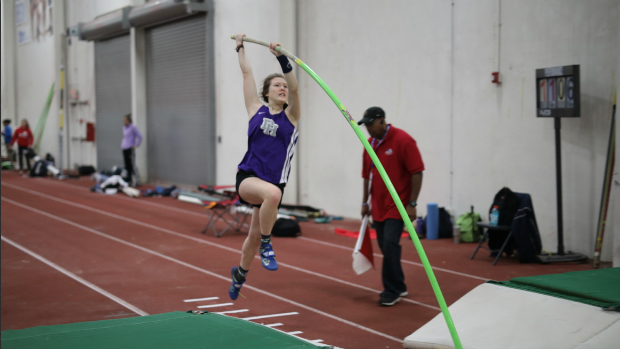 Although Stafford's Gennifer Hirata won the 5A girls pole vault with a clearance of 12-6, there was plenty for Patrick Henry sophomore Abby Tershak to celebrate on Friday.

First, there was her new personal best of 12-3, which added three inches to the record she set at last weekend's 5D Region meet, where she placed runner-up, to Hirata. However, Tershak was much closer to her rival this week, closing the eight-inch spread from regionals to a mere three.

Both vaulters got a gift from the pole vault gods. At 12 feet, Hirata easily cleared on her first attempt, but Tershak missed their first jump. On her second jump, Tershak had a good approach and liftoff, but caught a bad break when her pole hit the bar after leaving her hand, dragging along the length of the right side before hitting the standard and falling to the ground. Although the bar shook, it refused to fall, and Tershak's jump was ruled successful with the wave of a white flag.

By clearing 12 feet, both vaulters toppled the existing state mark of 11-9, set by Deep Run's Adeline Scelzi in 2014.

There was more drama with the 12-3 clearance. Both vaulters missed their first attempt. On try #2, Hirata was well over the bar on her jump, pausing briefly at the apex before pushing off her pole and falling back to Earth. Tershak missed again, and she was down to her last try. Although she nudged the bar on the way up, the clearance was made, and once again, the bar stayed atop the standards making for a valid jump.

Tershak would falter at 12-6, but it was Hirata who grazed the bar on the ascent of her second jump, leaving it rumbling and wobbling, but refusing to fall off its standards. With the win sealed, the Indian junior made three tries at the Boo Williams complex record but failed to clear 13-2.

In the aftermath, Tershak reflected on a performance marked by its nerves and prayers.

"I was worried about losing my adrenalin," said Tershak, speaking of the extended rest period which followed the breaking of Scelzi's record as a second measurement was made, followed by a five-minute break.

But the nervousness jumped back as she watched the bar waver on her 12-3 attempt.

"I was on the mat looking up and saw the bar shaking. I was praying that it would stay."

Tershak has previous experience with bars, but not the ones that balance on steel standards. Her background is in gymnastics, and ironically, it was the uneven bars that served as her favorite event. But as the youngster bloomed into a sturdy young woman of over 5-foot-6, it became more obvious that she had outgrown the tiny gymnast frame. Her mother offered a suggestion.

"Late in eighth grade, she said that I should take up track, and try the pole vault," said Tershak. Upon entering Patrick Henry, she was linked with head coach Jeff Johnson and vaulting coach Mike Parker who works with the Liberty Christian Academy team, as well as college athletes in the Roanoke/Lynchburg region. Twice a week, she makes the trip to Lynchburg to work with Parker, while she stays at her home track on the other days.

"I used to hurdle and long jump," said Tershak, "but now I have high jumped a couple of times. I'd like to do more of that," she added, noting that she has cleared 4-8 so far.

Tershak will be in New York City's famed Armory two weeks from now for the New Balance Indoor Nationals. Then she will move on to her next challenge - vaulting outdoors. Last season, Tershak cleared 11-6 on April 1 at the Vince Bradford Relays, but took five weeks to get over the 11-foot mark again, finishing the season with an 11-3 clearance at the 5A state meet to place second - to Hirata.

It looks like the Patriot might not have to look farther than the next spot on the leaderboard to find her next goal.