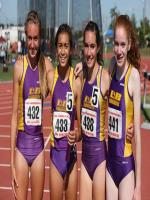 Conference 7 Indoor Championship Meet Recap...
The Lake Braddock Boys and South County Girls were crowned the inaugural winners of the Conference 7 Championship at Episcopal High School in Alexandria on Saturday....

Top 50 Girls XC Teams for 2013 based on Top 7 Returnees...
Ranking the top 50 returning girls&#39; cross country teams in the state of Virginia based off the season best 5K times from last fall of each team&#39;s top 7 returning runners. Links also to the sam...

Virginians @ New Balance Indoor Nationals (Day 3 Highli...
Oscar Smith&#39;s Michael Cherry in the 400 and Westfield&#39;s Nathan Kiley in the 800 winning national titles lead as the top performances by Virginians on the final day of the 2013 New Balance Nati...

Northern Region Girls Meet Summary...
Felecia Majors may go down as the greatest all-around track athlete in the history of the Northern Region. There will at least be no athlete after her to challenge for that distinction with this being...