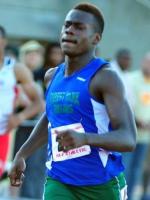 Michael Cherry On His Historic 300 Meter Race In 2013...
Nike athlete Michael Cherry looks back on the race in 2013 that defined his high school indoor career in Virginia...

Forest Park Alum Ricky Morgan is Now A World Record Hol...
The quartet of Shinnick, Benjamin, Norman, and Morgan broke the NCAA and World Record in the 4x400 this weekend to win the Tiger Paw Invitational in 3:01.98....

How Many Olympians Will Team VA Have (US Olympic Trials...
Over the next 11 days the eyes of the entire track & field world will be on the US Olympic Team Trials out in Eugene Oregon. Competing there will be 15 athletes from Virginia in 18 declared events. Th...