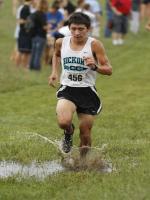 Salute To Seniors: Micah Ellington...
MileStat salutes standout runner and future collegiate runner Micah Ellington. Ellington competed for Hickory and will be running for VMI this fall. Check out his stats, take on his running career and...

Albemarle Invitational Preview...
At Panorama Farms on Saturday, Albemarle senior Ryan Thomas will get one of his last opportunities to race on his home course as his team welcomes 35 schools to the grassy rolling hills of Panorama fo...

Top 50 Fastest Boys XC Times in Virginia...
Paul Adam of Lee-Davis and Jason Menzies of Lafayette opened up with sub 16 minute 5K performances in their victories at the Great Meadow Invitational and Newport News Invitational respectively. A lis...

Group 5A Conferences (#9-16) Pre-Season Virtual XC Meet...
Pre-season virtual meet cross country previews for each conference (#9-16) among the boys in the new Group 5A classification based on season best 5K performances last fall in the database from the ret...