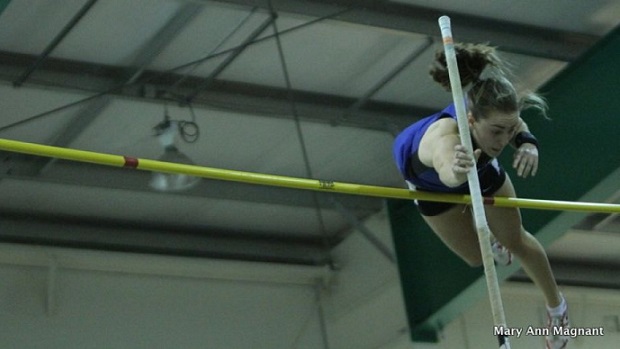 Friday Morning Recap: Much like his 6A counterpart, John Warren of Prince George was able to sweep the horizontal jumps in his division.  Warren went 23-0 to take the 5A state title.  Runner-up Marcus Taylor of Highland Springs was able to turn in a big day as well as his jump of 22-10.25 was over 7 inches better than his previous season best.  Highland Springs benefitted greatly from the event as they picked up 13 team points.

Bria Anderson of Mills Godwin came into the meet as the favorite in the girl’s long jump and delivered on the lofty expectations jumping 18-11.5 for the win.  Anderson’s mark was 5.5 inches further than her previous season best and moved her into the top 20 in the United States rankings.  It was a big day as well for Gloucester senior Natalia Bueker.  Bueker came into the meet seeded only sixth but moved all the way up to second with her jump 17-11.  This too was a big season best as she came into the meet having jumped 17-2 previously.

The pressure was on Brooke Point senior Joe Cline coming into his last throw of the first round in the boy’s shot put.  The heavy favorite in the event scratched on his first two throws and was down to his last chance to advance to the finals.  Cline made the most of the opportunity as he not only made finals, but came through with a new personal best throw of 54-8.25.  The win was the first for Cline at the state level.

Out of all weeks to get sick, the week of the state championship would not be the one any athlete would hope for.  It would be excusable, then, if Shania Williams was not able to perform to the best of her ability seeing as she has been laid up most of the week with the norovirus.  The Patrick Henry senior would not let it stop her, though, as she battled through the sickness to win the girl’s shot put.  Her best throw of 40-8.75 was almost three feet better than her closest competitor.

Friday Recap: The atmosphere was much more subdued than we are used to at the Boo Williams Sportsplex as action kicked off at the 5A and 6A state championship meets on Thursday.  The new VHSL reorganization gave us an afternoon of small crowds as athletes from both divisions competed in the first two rounds of field events.  Even with the challenges that the new schedule poses, some incredible performances were still posted.

Action was tight in the girl’s high jump as Nicie Grier-Spratley of Edison, Kailah Boateng of Brooke Point, Brianna Hayes of Matoaca, and Chantel Ray of Hampton all jumped 5-4 this afternoon.  It was left to the officials to figure out the final order as Grier-Spratley was declared your winner by misses.  Boateng ended up second while Hayes and Ray tied for third.

The winner was much more cut and dry in the boy’s high jump as Highland Springs senior Tyquan Rowley won with a leap of 6-4.  The jump was a new season best for Rowley by 2 inches.  Every jumper that cleared opening height ended up earning an All-State slot in this event.

Rowley followed up his efforts in the high jump with a second place finish in the triple jump.  He was no match, though, for Prince George senior John Warren.  Warren won the event with a jump of 48-11, three feet further than second place.  An interesting note here – Warren has now won three state titles in three different states; previously he has won the triple jump in Kansas and Texas during the outdoor season.

LaChyna Roe of Henrico won the girl’s triple jump in a similarly dominating fashion.  Her jump of 38-0 was almost two feet further than her closest competitor.  The triple jump was big for Henrico as they recorded first, third, and seventh place finishes for an event score of 18 points.

The last event of day 1 was the 5A girl’s pole vault.  Those who stuck around witnessed a great clash between Adeline Scelzi of Deep Run and Shelby Garnand of Hickory.  In the end, it was Scelzi who prevailed with Garnand taking runner-up honors.  Scelzi logged a new personal best mark of 11-9 in the competition.

Coverage from the VHSL Group 5A State Indoor Championships held February 27th through March 1st at the Boo Williams Sportsplex in Hampton.

Coverage central for all 5 VHSL State Indoor Track & Field Championship meets to be contested over the week. MileStat.com will have on-site coverage at all of the state meets contested at the Boo Williams Sportsplex in Hampton and Liberty University's Tolsma Track Center in Lynchburg.

The top three teams on the boy’s side in 5A have seen a lot of each other this postseason.  Competition has been fierce thus far between the squads as mere points have separated all three at the Conference 11 and 5A South region meets.

Taking the performance list and scoring it as a meet, MileStat.com can generate a fairly accurate team score projection for the teams slated to compete at the Group 5A State Indoor Championships on Friday and Saturday at the Boo Williams Sportsplex in Hampton.

Want to score the performance list and see what teams are in best position to compete for the state indoor team titles and top 3 finishes at the Group 6A and Group 5A State Indoor Championships? Sean Leyh of MileStat.com has already done that as he tallies up the state meet entries to project the top 10 or 12 teams heading into each state championship meet at Boo Williams this weekend.

When the VHSL announced plans for a new classification system last year, we knew major changes were in store.  Virginia high school athletes will be crisscrossing the state this week as they head to their respective championship meets.  Three different sites will host the finest athletes in the state as they look to write a brand new chapter in the record books.

Performance list for the 2014 VHSL Group 5A State Indoor Championships to be held Thursday thru Saturday, February 27th thru March 1st at the Boo Williams Sportsplex in Hampton, Virginia.