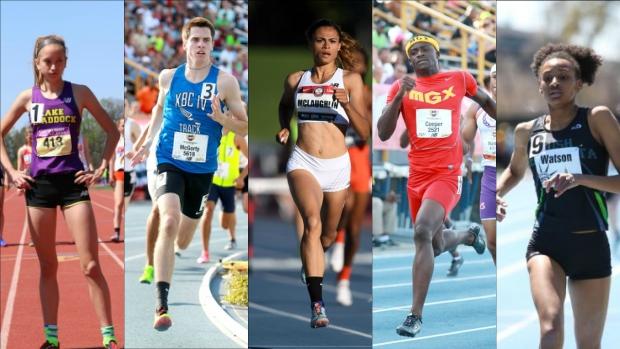 In exactly two months - January 13th and 14th will be the two most exciting and record breaking days of track this year and potentially ever. A historic group of record holders and elite athletes will all convene on LU's brand new hydraulically banking 200m Beynon track for the VA Showcase invitational.

Though the competition will be very strong up top, the goal of this meet and why it is not limited by performance is to make this the premier meet in the nation and the premier meet for all athletes of all skill levels. Meet management is working to make every single section, flight, and heat competitive and seeded correctly to create an environment for personal records. Whether your athlete runs a 4:10 Mile or a 6:45 Mile, we want your athlete to pr and experience competing in the nation's biggest and best meet.

With the great help of the NSAF, hundreds of coaches, and many other key players, meet management has been able to put together the single greatest competition field in regular season history. This includes athletes who have competed in the Olympics, ran in the Olympic Trials, set national records, and won numerous national titles.

Headlining this field is national record holder and 2016 Olympian Sydney McLaughlin (Union Catholic, NJ). She owns both the indoor 400m and outdoor 400mH national records. She even competed in the Rio Olympics this past summer on the United States team. She advanced to the semi-finals and finished the season ranked in the top 10 in the entire world.

Tentatively she will be competing in the 300m dash in a nation record bid. She has ran the 400m in 51.84 indoors which is faster than both Francena McCorory and Sanya Richards-Ross... and she did it as a junior. This race will come just as she is adding speed back into her workload and will be a fast one to say the least. Not speculating too much but if the other big stars decide to run this as well, there could be three girls running sub 37 in this race!

On the boys' side of competition, national champion and record holder Tyrese Cooper will be racing the track in both the 55m and 300m dashes. He ran a blazing 10.36, 20.46, and 45.23 last year as a freshman! He went on to win the 400m outdoor national title and only lose once indoors to Noah Lyles when he ran a national record in the 200. Tyrese will be looking to be the first sub 33 second 300m runner in our nation's history and will have Micaiah Harris (Western Branch) to push him the entire way.

In the circular races things get fast in a hurry. Lake Braddock's Kate Murphy, Chantilly's Brandon McGorty, and Rush-Henrietta's Sammy Watson all headline the distance events. All three of these athletes are on pace to shatter the 1000m and potentially Mile national records this indoor season. All three are likely to go down in history as three of the greatest mid-distance runners ever.

These athletes are just the start of the long list of US #1's and record holders who are slated to compete at this great event.

By the numbers: athletes attending this meet are owners of 21 national and national class records both as individuals and as part of relays. There will also be over 100 All-American athletes and over 20 national champions competing in this two day Showcase.

This list also includes 13- US #1 returners, 31- US Top 5 returners, and a monster 57- US Top 10 returners. These numbers do double count athletes ranked in multiple events but they also do not include athletes like Tyrese Cooper or Sydney McLaughlin who do not run the 300 every season.

Check out the following previews

Meet management is finalizing some huge names in the hurdles, vault, and shot and these events will have their own press release.